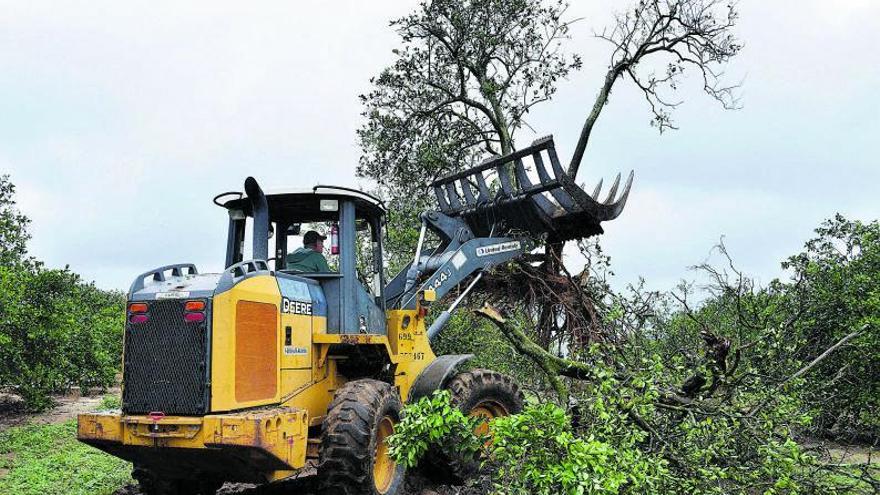 Its possible spread in the Valencian Community, the main producing region of Spain, could be a “real ruin”, as recognized by the Valencian Institute of Agrarian Research (IVIA). One of its transmitting insects, Trioza erytreae, is present in territories of the Iberian Peninsula such as the Atlantic coast of Galicia and Portugal. For this reason, Alberto Urbaneja, coordinator of the Center for Plant Protection and Biotechnology of the IVIA, recognized this week, in a conference organized by the Department of Agriculture, that it is the most serious threat to our citrus industry “due to its capacity for destruction and difficulty in managing ». Today it is “incurable” and “intractable,” he said bluntly. Perhaps in a few years, however, it may just be a nightmare from the past.

Detail of the transmitting insects of the disease of bacterial origin. Assets

The «greening» appeared for the first time in America in 2004, in Brazil, and in ten years it was capable of causing the death of 43 million plants while in Florida, after its detection in 2005, it caused a decrease of 70% of the total citrus production in this State. The spread of both diseases also caused a serious confrontation with the rest of the North American states with citrus areas, such as California or Texas, whose authorities imposed serious restrictions on trade with Florida (which has evaluated the losses at 7.1 billion dollars after devastating 66,000 hectares). The latter is already massively sourcing oranges from Brazil or China to guarantee supply to its juice industry. Meanwhile, Mexico has increased the alert to avoid the arrival of two diseases and it is known that in the Asian giant it is still present and generates enormous losses.

A tractor destroys a citrus grove in Florida in 2013. Mark Elias / Bloomberg

What to do? According to the researchers, our growing conditions could not withstand the large number of chemical treatments that are being carried out to control HLB vectors in other citrus areas of the world with the presence of this disease and which, furthermore, are not entirely effective. The detection in 2014 of one of the insects that transmit the disease (the aforementioned Trioza erytreae) in Galicia and Portugal has put the Spanish citrus industry in check.

Advances for the sector

The IVIA took action on the matter and now they are beginning to bear fruit. The institute directed by Rodolfo Canet, among the new strategies to fight HLB, looks for tolerant plant material with the aim of presenting new, sustainable and environmentally friendly strategies to fight the sector. There are several open fronts in this fight and very promising results have already been achieved, such as the spectacular control of Trioza erytreae through the introduction, brought from South Africa, of the Tamarixia dry parasitoid or the development of a highly specific detection method for HLB. . The biological control of vector insects was the starting point of the HLB control and control work, and effective tools are now available. Aware of the existence of plant material tolerant to the disease, subsequently, the study, selection and improvement programs of citrus material were incorporated, according to Maria Ángeles Forner, researcher at the Center of Citriculture and Vegetal Production of the IVIA.

Furthermore, in very recent studies at the University of California Riverside, researchers set out to identify and classify citrus varieties and patterns with greater resistance and / or tolerance to this disease. These scientists have shown that the presence of some peptides (that is, natural proteins that act as a defense against bacteria) could be responsible for both characters against HLB. Reaffirmed in the viability of this line of action, the IVIA has recently promoted two projects aimed at controlling the disease.

On the one hand, the search for tolerance in the plant material that the center has -which is one of the most complete collections, perhaps the one with the most in the world- is deepened and, on the other, it works on other own developments, which are parallel and complementary, such as the increase and activation of the plant’s immune system to stop the effect of the «yellow dragon».

From the Ministry of Agriculture governed by Mireia Mollà, with the collaboration of the different actors of the citrus sector, an ambitious research project will be launched that includes basic studies on the molecular bases that are behind tolerance to HLB and the induction of defenses, as well as an exhaustive screening of more than 500 hybrid patterns developed at the IVIA from parent trees previously described as tolerant. In parallel, agronomic studies in the field will study the efficacy of these cases.

Without specifying time frames, the IVIA indicates that the main objective of this project is to be able to count on a not too distant horizon with a range of HLB-tolerant plant material adapted to Mediterranean growing conditions, as well as a new sustainable method of cultivation. control that activates the “volatile” defenses of plants and, thereby, reduces the impact of pests and diseases, not only from HLB or its vectors but also from others, such as the “South African Cotonet”. And all this with an important added value: it will not be necessary to resort to chemistry, phytosanitary products

The regional minister, during the conference New strategies to fight against the HLB: Tolerant plant material and induction of defenses, described the first results of these works initiated by the IVIA as “encouraging”. Let’s hope that the “greening” does not reach the Mediterranean citrus industry. In Kenya they have detected the transmitting vector, the Asian psilid that carries the most aggressive strain of this fearsome plant pest, which greatly worries South Africa, one of the emerging markets of the citrus business and whose exports to the EU have soared in these last years.