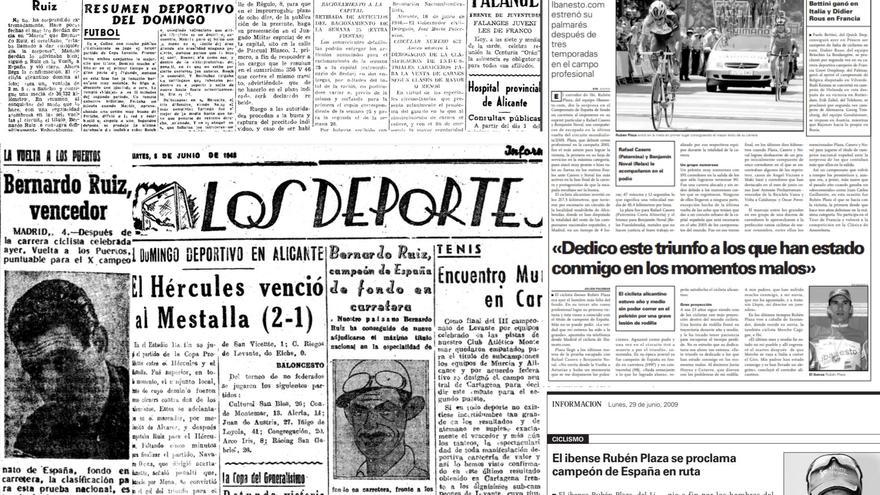 The Oriolano cyclist, possibly the best in history born in the province, added his first national champion title in 1946. The event was held in Madrid, on a circuit prepared for the occasion on the Cuesta de las Perdices. Bernardo Ruiz prevailed with more than two minutes of difference on the second classified, Antonio Sancho. The third, Bernardo Capó, was eight minutes behind the winner. An undeniable triumph.

Two years later, Bernardo Ruiz repeated the title at the same venue as the first time and with the same sufficiency. The second classified, Antonio Gelabert, spent almost three minutes more than the Oriolano to complete the 150-kilometer course. That podium was completed by Julián Berrendero, more than four minutes behind the already two-time national champion.

1951: Three-time championship and one step in history

Bernardo Ruiz completed his triplet in 1951, in a special format, since that year the Spanish Championship was played in three races: the Masferrer Trophy (Barcelona), the Zamora Grand Prix and the Tour of the Ports (Madrid). The rider from Alicante obtained the highest number of points (43), finishing in third place the first race and winning the remaining two. Dalmacio Langarica and Manuel Rodríguez Barrios were left behind.

With the three-time championship, Ruiz was only one triumph away from equaling the four titles of Mariano Cañardo, the most awarded in the history of the Spanish Championship. And he even had options to surpass him, since he was runner-up in the 1947, 1950, 1954, 1956 editions. In the same group as Ruiz, with three titles, are Alejandro Valverde, Luciano Montero, Julián Berrendero and Antonio Suárez.

52 years had to wait to have another Alicante national champion. This was the Ibense Rubén Plaza in 2003, in an edition disputed in the Madrid town of Alcobendas, over 217 kilometers. Plaza prevailed in a tight final sprint over Rafa Casero and Benjamín Noval, his teammates on the run, who arrived 19 seconds ahead of the main peloton.

2009: Plaza gives the surprise and makes a double

In 2009, all eyes on the Spanish Championship, which was held on the roads of Cantabria, were on Alejandro Valverde, the great favorite for victory. However, the Murcian was overtaken in the last kilometer by an immense Rubén Plaza, who took the rojigualda jersey by beating Tino Zaballa and Valverde himself, second and third, respectively. It would be the fifth title for Alicante cycling and, for now, the last.

This year the appointment for the national title is held in La Nucía. It is the second time that the province hosts this event. The previous one was only five years ago, with Cocentaina as the end of the race. The champion was the Murcian José Joaquín Rojas, who crowned the great work of the Movistar team. Ángel Vicioso took the silver medal and Jordi Simón gave the bell taking the bronze.

Juan Ayuso, the next one?

After his success in the “Baby Giro” and his anticipated promotion to the Emirates team (it was scheduled for August and was completed this week), the name of Juan Ayuso appears as the great candidate to join Bernardo Ruiz and Rubén Plaza. The young cyclist from Javea, who already won the junior title last year, will not compete in this Sunday’s test, but he will surely have multiple options in the future to don the national champion jersey online.