Another lonely Scream in a Zócalo, once again, empty. The president of Mexico, Andrés Manuel López Obrador, commemorated on Wednesday night the beginning of independence accompanied by his wife, Beatriz Gutiérrez Müller, members of the Government and a few dozen special guests. Again, without the warmth of the attendees, who gathered at some entrances to the square, especially on Madero Street, asking to enter. In front of the central balcony of the National Palace, a fenced Zócalo and a security perimeter to avoid crowds and coronavirus infections. Another Scream for the television cameras, in silence. The president included in the usual formula a few words of tribute among his twenty alive. “Long live honesty”, “the anonymous heroes” and “long live the cultures of pre-Hispanic Mexico”, a claim and a declaration of intent in line with his political discourse.

The event was held, as announced by the Executive, “in memory of the heroines and heroes” who put an end to the conquest. “The 211st Anniversary of the Cry of Independence for freedom and justice is commemorated,” was the motto of the night. López Obrador brought together three historical events this year: the 700 years of the founding of Tenochtitlan -forcing a few years the anniversary-, the five centuries of the invasion and two of independence, whose celebrations will culminate on September 27. Already on the occasion of the commemorative activities of the fall of the capital of the Aztec civilization, a month ago, the festival became an exaltation of the “indigenous resistance” as an alternative to the memory of what the leaders of the Fourth Transformation, the Obradorista political project, usually defined as the “misnamed conquest.”

The heart of Mexico City, where the authorities erected a more than 15 meter high replica of the Templo Mayor, the symbolic axis of the universe for the Mexica, was adorned with pre-Hispanic motifs. “This cry represents a lot,” stressed the president on the eve, downplaying the fact that for the second time the celebration, the third of his term, was not public. “I assure you that in their homes the majority of Mexicans will be able to participate, they will be able to see everything that is going to be done, the program, everything is complete.”

The historic center of the capital began to empty at five in the afternoon, at which time the Government ordered to close the commercial activities of the streets surrounding the Zócalo. However, already at night, hundreds of people approached the square to hear the shout, at least from the entrances and watch the pyrotechnic show. From the Palace of Fine Arts the sidewalks were lined with street stalls selling banners. Cristina González, 32, has been selling flags of different sizes for six years, from 80 to 250 pesos, and regretted that it seemed like a normal day due to the low influx.

The day added celebrations in various foreign capitals with expatriate communities. The most controversial took place in Istanbul, where Consul Isabel Arvide included the name of López Obrador along with those of the heroes of independence, which caused the rejection of several attendees. One of those present took the stage to protest and later stated that “Mexico is not López Obrador”, making clear her disagreement for giving a political cut to an institutional act. 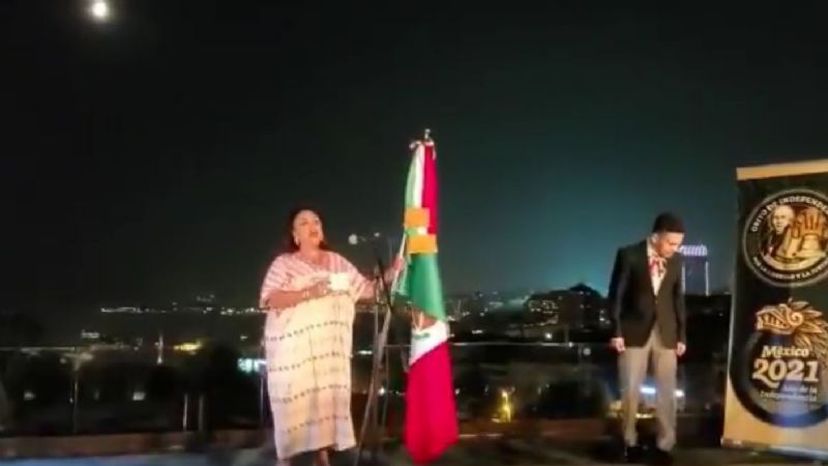 If the Scream was silent again, unlike last year this Thursday there will be the traditional military parade, which will tour the Paseo de la Reforma in the capital from ten in the morning. On this occasion, the events will have a questioned “special guest”, the president of Cuba, Miguel Díaz Canel, who as planned will deliver a speech. López Obrador defended, without nuances, his participation in the festival, which coincides with the summit of the Community of Latin American and Caribbean States (Celac) convened for Saturday. “We cannot invite some and not others … Mexico has its doors open to all rulers, we are friends of all the peoples of the world,” he said.

Also Read  Carpisa Foods: An empire based on hamburgers | Business