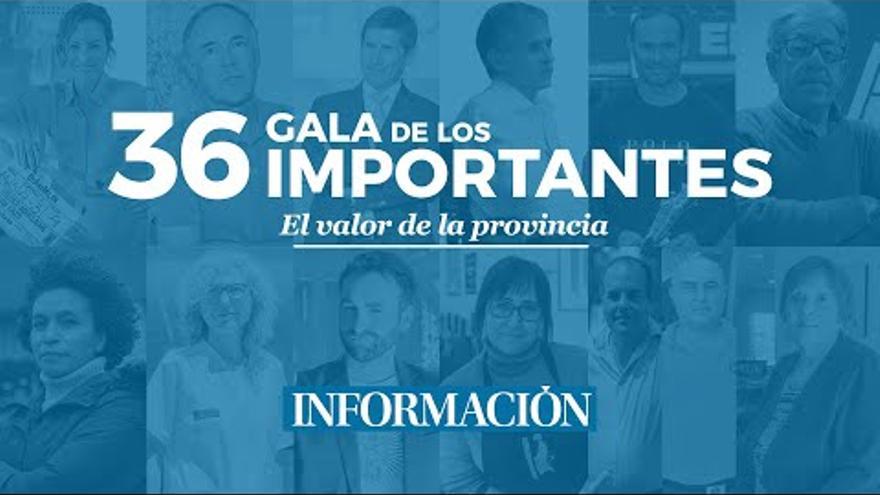 El social recognition of INFORMATION to the values ​​of the province of Alicante It is celebrated this Tuesday from 12 hours in a special edition with the Principal Theater of Alicante as a setting in which the heroes of the pandemic. Thirteen people and groups (the award for aid organizations is double) that have been very “Important” in the last year and a half fight against the crisis derived from the global disease, to whom the newspaper wants to recognize the merit of their actions towards others, some for their exemplary capacity for reaction and solidarity in the face of the difficulty of the moment, and others for their efforts to find answers to the virus.

The event is marked in time and in its format by the evolution of the health crisis that prevented it from being held on its usual date of February, when the province was fighting against the third wave. The prizes correspond to the 2020 edition and are delivered at a gala that will be conducted by the director of the Club INFORMATION, Toni Cabot, and by the journalist Beatriz Rico. The ADDA Simfònica string quartet will perform.

It will open the list of winners Rosa Louis, manager of the health department and the Marina Baixa hospital, on behalf of the health workers who have been in the trench for a year and a half in the fight against SARS-CoV-2. The one who was one of the first health workers to become infected in the exercise of her profession described on April 18, 2020 on her social networks how they had been overwhelmed by an unknown virus, “which has made us cry of impotence for not knowing how to treat to our patients, of pity for each patient who remained alone and who sometimes, too many, died alone, and share the pain with our colleagues (…) without looking at the clock, denying fatigue and fear, and moving on » .

Jose del Castillo, Head of the Private Security Unit of the National Police, will receive the “Important” to the security and emergency bodies. The inspector, who spent 50 days in the ICU after also contracting the covid in the performance of his duties, is a health police interlocutor, leading the fight against attacks on medical personnel.

Aid organizations play a prominent role every day in helping disadvantaged people in the long queues of hunger and providing a livelihood for the homeless. Alicante Gastronomic Solidarity and DYA Elche, at the foot of the canyon from the first moment, they deserve the award.

The central building is adorned with banners bearing the image of the winners to welcome the delivery of the awards. | ALEX DOMÍNGUEZ

El altruism of farmers who took out their tractors to spray the streets against the virus obtains recognition on behalf of the numerous volunteer initiatives that have emerged in the province.

One in four victims of the pandemic were nursing home residents. A critical situation offset by hopeful recoveries such as that of Josefina Verdú Sanfélix, 86, who defeated the virus in the third wave in a residence in Alicante despite having a lung condition. The tribute to the elderly had to be present at the gala of the «Important».

Also the recognition of the excellent educators and caregivers of the province, with exemplary actions such as the one carried out by the nursing care technician Rachel Ozuna, who voluntarily locked himself up for 15 days with two minors infected with covid in the Provincial Home to avoid spreading to the geriatric center in the center.

Who said that mathematics is not practical? In the covid crisis, the projections of experts such as Santiago Garcia, Professor of Statistics at the Miguel Hernández University, have provided privileged information to understand the sickness curve and the evolution of the pandemic.

Researchers from the province add to their investigation about the virus a clear didactic facet that seeks to bring the keys to the epidemiological situation closer to the population, and among them the professor of Public Health Ildefonso Hernandez, A national benchmark in this crisis, he is the recipient of the award in science.

Several hotels offered their facilities, empty because of the covid, when the sanitation collapsed. The San Juan Complex It is «Important» for opening this path by medicalizing 230 rooms to make them available to those affected by the disease and health workers.

Essential commerce guaranteed supply to the population with initiatives that went further, such as the one carried out by Vanessa Cardenas, who went out of his way during confinement with the elderly alone, whom he cared for as if they were from his own family. The «Important» of the Alicante actress Ana Millán It is for the culture, for all the artists who have gone out of their way to make confinement more bearable by providing their contents free of charge to the population.

The footballer will collect the last award Nino for leading the rise of Elche to First Division in 2020 as an example of overcoming athletes in such a complicated stage, a feat that has continued with their permanence this weekend.

Special with the best moments of the «Important»

The readers of INFORMATION will receive next Sunday, inseparably with the copy, a special booklet in full color with the best of the gala in chronicles and images.

The digital edition of the newspaper will broadcast the gala via streaming with the television signal and will include photo galleries, follow-up on networks and interviews with the winners on Facebook Live.

The special program “Important 2020” on the occasion of the gala will be broadcast on Sunday, May 30 at 10 pm, along with the spaces “The pandemic” and “This is how we have told it.”

Sanitary that was in charge of one of the health areas most affected by the pandemic. She was one of the first to be infected in the exercise of her profession.

Example of the delivery of the different policemen, he also fell ill with covid and overcame it after 50 days of stay in the ICU.

Entity emerged from the gastronomic fair of the province that has prepared 260,000 hot menus throughout the crisis to families without resources and homeless.

Until the end of the state of alarm, its volunteers attended a shelter for the homeless, served batches to families who did not have enough to eat and helped elderly people who could not leave the house.

Farmers altruistically took their tractors out onto the streets to spray cities against COVID.

Josefina Verdú. He overcame the covid at 86 years old

He fell ill in the third wave in a nursing home in Alicante and defeated a disease to which more than 2,000 elderly people in the Community have succumbed.

He isolated himself voluntarily with two children from the Provincial Home to prevent the virus from reaching the senior annex center.

Their correct predictions have made it possible to understand the evolution of the pandemic.

Science is abuzz with response in the search for solutions to the virus.

Pioneer in medicalizing its facilities to put them at the service of healthcare.

It guaranteed supply to people who were alone and isolated.

Example of overcoming when leading the rise of Elche after the break by the covid.

The ADDA Simfònica string quartet will perform the Community anthem

The 36th edition of the awards for excellence in the province, focused in this edition on the heroes in the fight against the pandemic, will include the performance of the string quartet ADDA Simfònica, which will interpret the anthem of the Valencian Community. It will be a musical performance of about five minutes to close the awards ceremony on the Principal’s stage, decked out for the occasion with banners on its façade bearing the image of the winners of the “Important” INFORMATION awards for 2020 .

The string quartet is part of the resident orchestra of the Alicante Provincial Auditorium, which is currently made up of fifty musicians, under the direction of Josep Vicent. The quartet interpreted the anthem of the Community in the events organized by the Generalitat on the occasion of October 9 at the Palau de la Música in October 2019. The notes of the string quartet will complete an act subject to the limitations of assistance imposed by the health authorities.