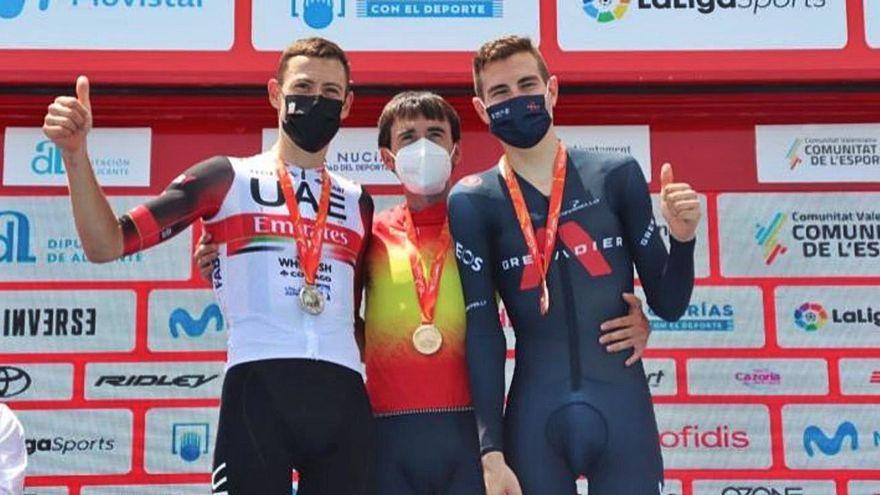 The winner of the test, Ion Izagirre, on his bicycle. | RFEC

The first test yesterday was the female one. The Balearic cyclist Mavi garcia won her third title of champion of Spain in fighting against the clock, ahead of Sara Martín and Lourdes Oyarbide. Precisely the absolute or elite runner-up, Sara Martín, was the first classified in the sub-23. This athlete returns to vindicate herself as the main promise of national women’s cycling with a great second place and the under-23 title on her return to competition after the hard fall she suffered in the Vuelta a Burgos.

The Castilian-Leon cyclist from the Miera-Cantabria River was another of the great protagonists of this Elite-sub23 female time trial with a great performance that gave her the fourth absolute place and the silver sub-23. The podium completed it Mireia Trias, Massi-Tactic cyclist, who was 7th overall.

The first three classified in the sub-23 category. | RFEC

The men’s U23 event began next. Igor Arrieta, was proclaimed champion of Spain in the category, ahead of two other very young cyclists like Pablo Garcia, second year, and Enekoitz Azparren, which also debuts in 2021 as a sub-23. The absolute men’s event then started with a starting distance 8 kilometers higher than those used in the two previous races. Despite this, only 8 hundredths, a difference barely perceptible to humans, tipped the title of champion of Spain in time trial in favor of Ion Izagirre. The Gipuzkoan cyclist was slightly ahead of De la Cruz, who was second in a vibrant duel on the roads of the province. A wonderful duel for victory. Carlos Rodríguez and Raúl García Pierna They have emerged to remind both of them that a hopeful future awaits them.

In the final stage, Izagirre managed to overcome the 4 seconds behind that he had at the halfway point and got those extra 8 hundredths that make him the new champion of Spain. The Astana rider, already wearing the Spanish champion jersey, commented that “before such an important event as the Tour, a victory like this gives you a lot of morale.” Third was for the INEOS Grenadiers cyclist Carlos Rodriguez.

The winner, in the center, next to Martín and Oyarbide. | RFEC

La Nucía will be the venue for the championship today. It will first host the Online Elite-U23 Women’s event, which will be broadcast live on Eurosport 1 and Eurosport Player, between 11 am and 1 pm. Then, at 4.30 pm, it will be the men’s U23 road event. The race, which is contested by regional teams, will have as its main protagonist the Alto del Turrón Duro, of 4.75 km at an average slope of 8.1%.

Tomorrow is the highlight of the Spanish Championship with the online test UCI-Elite Men, which will be broadcast from La Nucía by Eurosport 1 and Eurosport Player, from 12 to 14 hours.