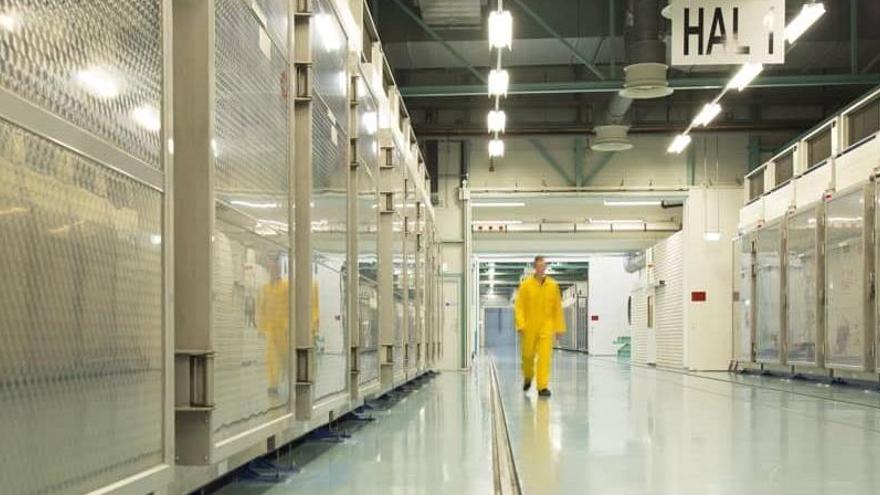 Iran launched on Monday the process to enrich uranium to a purity of 20%, in violation of the 2015 nuclear deal, which may hamper US President-elect Joe Biden’s plans to return to the pact.

The process takes place in the underground plant of Fordo, where it began on this day to inject gas into centrifuges, as reported by the spokesman for the Iranian Government, Alí ​​Rabií, coinciding with an escalation of tension with the United States during the last days of Donald Trump in the White House.

Its about latest breach by Iran of the nuclear pact signed with six great powers (United States, China, Russia, Germany, France and the United Kingdom), which is very weakened since Washington’s withdrawal from it in 2018.

One year after the US left the agreement, known as JCPOA for its acronym in English, and its reimposition of sanctions, Iran began to gradually reduce compliance with its nuclear commitments.

The JCPOA, which limits the Iranian nuclear program in exchange for relief from international sanctions, stipulates among other restrictions that Iran cannot enrich uranium to a level higher than 3.67%.

The Persian authorities have already exceeded this maximum purity limit since 2019, but only up to 4.5%, with the aim of putting pressure on the other signatories of the pact to counter the US sanctions.

Before the agreement was signed, Iran reached a 20% enrichment level, so it had warned that it was an easy task to do it again.

This purity, however, remains well below the 85-90% required to make a nuclear bomb, the main concern of the international community, despite the fact that Iran has always denied having that goal.

According to the government spokesman, the gas injection process in Fordo’s centrifuges began after the order given by the president, Hasan Rohaní, in order to implement a recent law approved by the Iranian Parliament.

That law, which was opposed by the Government, considering it harmful to diplomacy and the eventual understanding with the Biden Administration, It provides for the production of 120 kilograms of 20% enriched uranium every year.

It was approved just days after the assassination in late November of the prominent Iranian nuclear scientist. Mohsen Fajrizadeh, who is suspected of running the supposed former secret Iranian program to develop atomic weapons. Iran accused Israel of being behind the killing.

The conservative-dominated Iranian Parliament has also forced the government with this law to use at least 1,000 IR-2M advanced centrifuges at the Natanz facility, in another violation of the JCPOA, which only allows Iran to use first-generation centrifuges.

The new regulation also implies that, if the other signatories do not comply with their obligations within two months, Iran must limit inspections by the International Atomic Energy Agency (IAEA).

On January 1, the IAEA already reported that Iran had communicated its plans to enrich uranium to a purity of 20%, as confirmed shortly after by the head of Iran’s Atomic Energy Agency, Ali Akbar Salehi.

Rabií clarified that the process started this Monday has been launched after “taking measures such as informing the IAEA” and he highlighted that “within a few hours the first product UF6 (uranium hexafluoride) will be available”.

The European Union declared on Monday that, “if this announcement is implemented, it will constitute a significant departure from Iran’s commitments under the JCPOA, with serious implications regarding nuclear non-proliferation “.

For now, the EU avoided ruling on whether this action represents the end of the nuclear pact and preferred to wait for the analysis of the IAEA, which today plans to meet with the countries that still support the agreement.

Less conciliatory was Israel, an arch-enemy of Iran, whose prime minister, Benjamin Netanyahu, warned Tehran that his country “will not allow it to develop nuclear weapons.”

“Iran’s decision to continue to violate its obligations and increase uranium enrichment (…) has no other explanation than its desire to advance toward its goal of developing a military nuclear program“Netanyahu noted on Twitter.

Israel was one of the main detractors of the JCPOA from the beginning, pressuring the US administration of Donald Trump to abandon the agreement.

Conversely, Biden has been willing to return to the pact, although he has insisted that some points, such as the dates of the end of the restrictions, should be renegotiated, and other issues included, such as Iran’s ballistic missile program.

In this regard, the Iranian Foreign spokesman, Said Jatibzadeh, reiterated this Monday in a press conference that Iran will not negotiate any point of the JCPOA or its defensive capacity.

Jatibzadeh recalled that what Tehran demands is “the full implementation of the JCPOA without conditions and compensation for the damage inflicted on Iran by the US.”