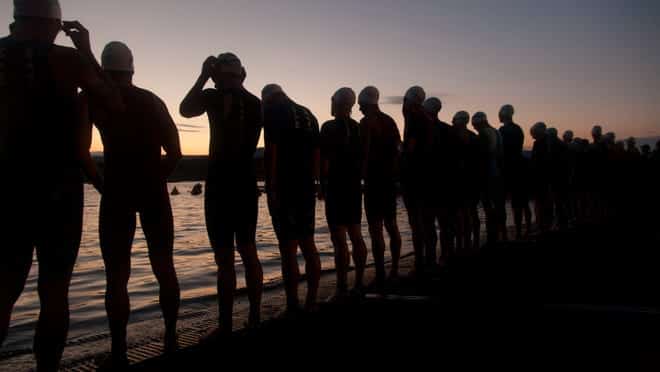 St. George plays host Saturday to the Intermountain Healthcare IRONMAN World Championship, with the biggest race in triathlons coming to Utah for the first time.

The start times at Sand Hollow Reservoir in Hurricane are at 6:15 a.m. for the male professionals and 6:15 for the female professionals, with the first finishers expected to cross the tape in downtown St. George just before 2 p.m.

The event, presented by the Utah Sports Commission, was being aired live on Peacock, NBCUniversal’s streaming service, as well as the IRONMAN Now channels.

More than 75 of the top athletes in triathlon will be competing, including reigning world champion Anne Haug and four-time title-winner Daniela Ryf on the woman’s side, along with Heather Jackson, another multi-time IRONMAN winner, and Utah resident Skye Moench.

On the men’s side, things could be especially interesting, with reigning champion Jan Rodeno unable to defend his title because of injury. Some of the top contenders, including past champion Sebastian Kienle and two-time Olympic Champion Alistair Brownlee, will be looking to take advantage and claim the title for themselves.

In all, there were more than 3,000 registered athletes hoping to finish what was likely to prove a scenic but challenging course.

The iconic race will traverse large swaths of Washington County’s redrock country, starting with a 2.4-mile swim course at Sand Hollow before moving to a 112-mile bike course and then a 26.2-mile run to th finish line at Town Square Park in the heart of St. George.

It marks the first time ever that IRONMAN’s largest world championship race will be held away from Kona, Hawaii. The race is technically the championship competition for 2021, with concerns over the COVID-19 pandemic and Hawaii’s tighter pandemic rules leading organizers to reschedule the race in Utah. The 2022 championship will be back in Kona later this year.

For locals, the event is likely to have significant traffic impacts. Saturday’s race, which begins in the early morning and won’t end until evening, marks a return to the full-length 140-mile distance that was used for the first few triathlons in the area in the early 2010s, meaning the course will cover huge swaths of the county, including along major roadways like state Route 18 and state Route 9, the main road to Zion National Park.

Haley Chura (USA) was leading the professional women’s side of the race, hitting the 9.2-mile bike mark with about a minute lead over Lisa Norden (Sweden) and Fenella Langridge (Great Britain). Daniela Ryf of Switzerland, a multiple-time IRONMAN champion, was in fourth, running about two minutes behind the leader.

Cyclists rode on SR-9 for 5.5 miles before turning left onto Telegraph Street in Washington City. The SR-9 section features a slight downhill for four miles before another steep, two-mile climb up and over the Hurricane Fault, just past Quail Creek Reservoir.

Traffic officials were set to limit traffic on state Route 18 starting at 8 a.m., with alternative routes recommended for residents in places like Dammeron Valley, Veyo, Brookside, Central, and Enterprise to the north of St. George. Motorists are encouraged to avoid SR18 between St. George and Veyo until 9 p.m.

Nine miles into the bike course, a tight group had gathered together at the front of the line for the professional men, with five athletes all within five seconds of each other.

At the 9.2-mile mark, Sam Laidlow was in the lead but had Florian Angert, Braden Currie, Kyle Smith and Daniel Baekkegard were all hot on his heels.

The bike course was expected to be a key to the race, with elevation changes, high temperatures and late wind expected to make it a challenging portion of the course. Once the cyclists finish their race along the Southern Parkway, they were set to go back up over the Hurricane Fault to turn around at Warner Valley, with a stiff climb at mile 14, with grade ranges from 6.2 percent to 7 percent as athletes ride “The Gap” up 400 feet in just 1.25 miles.

With the IRONMAN World Championship transitioning to the bicycle portion of the race, road closures were starting to happen in central St. George, with roads already closed in Washington City.

Traffic officials recommended that motorists avoid the course if they can, but there are alternative routes offered. Some of the main closures include:

Telegraph Street: Closures and delays from 3 a.m. to 3 p.m.

The first professionals started to emerge from Sand Hollow Reservoir right at 7 a.m., with the first male racers having been in the water for about 45 minutes.

The first five out of the water were Daniel Baekkegard of Denmark, Braden Currie of New Zealand, Florian Angert of Germany and Sam Laidlow of France.

On the women’s side, Haley Chura (USA) was the first professional out of the water, holding almost a two minute lead over Fenella Langridge (UK).

The athletes now transition to the bike course, a 112-mile trek across most of Washington County, starting on state Route 9 in Hurricane.

What does St. George get out of IRONMAN? Prestige, plus about $35M

Saturday’s race was expected to be the largest single-day event in the history of southern Utah, bringing in tens of thousands of visitors and requiring months of planning as organizers, local governments, law enforcement agencies and other cooperators readied themselves for a race that will use thousands of volunteers and close off much of the county to the usual traffic patterns.

The payoff? A certain amount of prestige, providing another reminder that St. George has become a premier destination for outdoor recreation enthusiasts. Also, about $35 million in direct economic impacts.

The thousands of athletes, along with their friends and families and fans, have traditionally spent about a week in the city, preparing for the race and dropping money on hotels, restaurants, stores and other parts of the local economy.

“Events like the IRONMAN World Championship strengthen our economic foundation and ensure the long-term viability of our communities,” said Kevin Lewis, Director of Tourism for The Greater Zion Convention & Tourism Office. “At a time when there are so many negative influences in the world, we are thrilled to move forward with optimism and purpose.”

The IRONMAN World Championship starts with a 2.4-mile swim in Sand Hollow Reservoir, but when athletes transition from the reservoir to the bike course, they’ll require large portions of some of Washington County’s major roadways to remain closed to most traffic.

When they leave the reservoir, they’ll bike across a section of state Route 9, the main corridor between St. George and Zion National Park and they main access to Hurricane, Toquerville, Virgin, Rockville and Springdale. Motorists are encouraged to avoid the road from 6:30 a.m. to 2 p.m., with race officials recommending some alternatives:

In addition, there are closures on state Route 7, the Southern Parkway, the main highway connecting southern St. George to Hurricane, passing through Washington Fields and past the St. George Regional Airport.  SR7 will be closed in both directions from the SR 9 interchange to Warner Valley Road with no vehicle access from 4:30 a.m. to 1 p.m. Officials recommend taking the following alternate routes:

St.George weather is key to IRONMAN

The sunny St. George temperatures and increasing wind throughout the day were expected to impact the race.

The professionals were wearing wetsuits as they prepared to hop into the water for the 6:15 a.m. start time, marking the first time wetsuits would be used for a world championship. Sand Hollow Reservoir is cooler than the Pacific ocean off the coast of Kona and measured 63.5 degrees as athletes waited for the race to stop.

Air temperatures were holding steady at 68 degrees and were expected to rise to close to the high 80s by mid-afternoon.

The top competitors were expected to cross the finish line just before 2 p.m., meaning they’ll likely avoid the worst of the day’s wind, but others could be dealing with major gusts as they finish the race, with wind speeds expected to increase to more than 20 miles per hour by 3 p.m. and remain at 20 to 25 mph until evening.