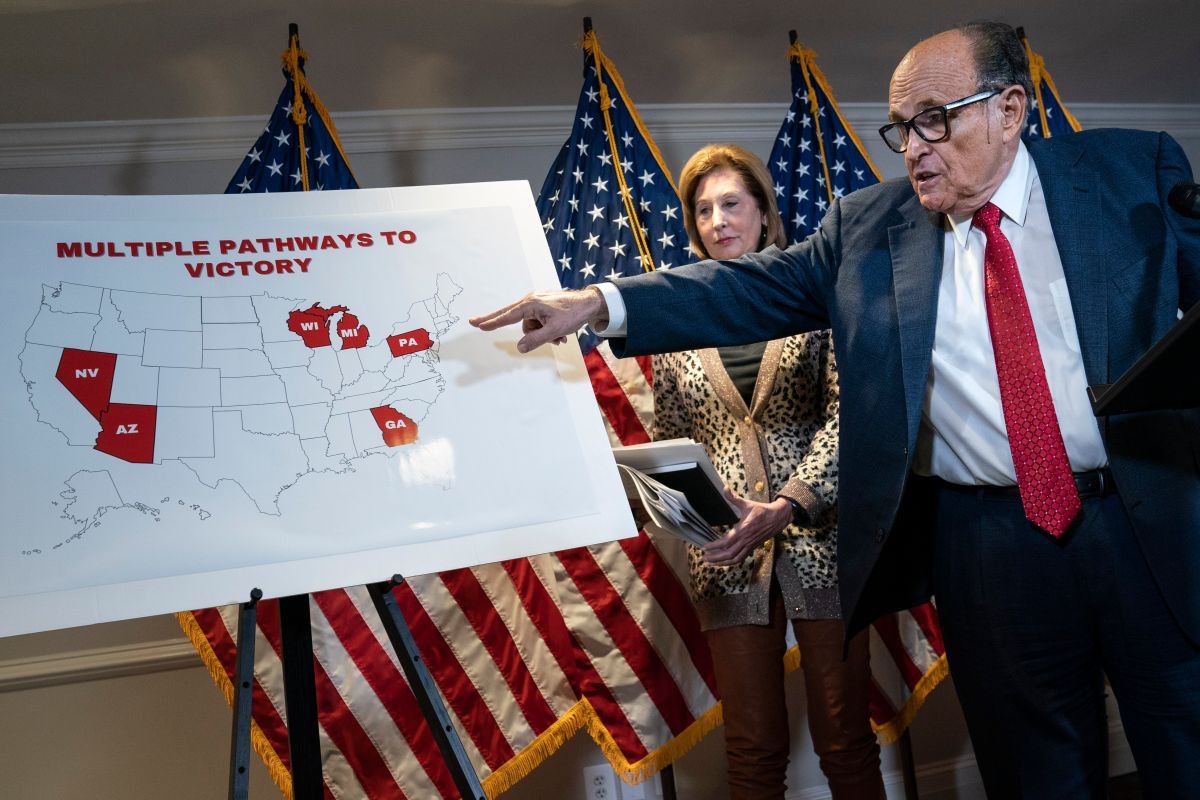 “It is not in the power of this Court to violate the Constitution”Judge Brann wrote Saturday. “In the United States of America, this cannot justify the deprivation of the right to vote of any voter, much less of all voters in its sixth most populous state.”

Judge Brann, appointed by the president Barack Obama, noted that President Trump’s legal team did not demonstrate its claims about the vote counting in the entity, which favored the Democrat Joe Biden.

Rudy Giuliani, a lawyer who leads the defense of the president, took that strong defeat as a small triumph, because he affirms that it brings President Trump closer to claiming before the Supreme Court.

“Today’s decision turns out to help us in our strategy to quickly get to the United States Supreme Court.”said the defender in a statement. “Although we do not agree with this opinion, we are grateful to the Obama-appointed judge for making this early decision quickly.”

Now the legal team is heading to the Third Circuit of Appeals, where it will be asked to reverse Judge Brann’s decision. If the petition is rejected, defenders of President Trump can request that the Supreme Court hear the case.

However, it is not so simple, as it will also depend on the decision made by the Third Circuit judges.

“We will seek an expedited appeal to the Third Circuit. There is so much evidence that in Pennsylvania, the Democrats eliminated our opportunity to present 50 witnesses. “, says Giuliani.

Part of their evidence is that election officials “blatantly” ignored the law that denies independent review of votes, accusing Democrats of corruption.

“We are disappointed that we did not have at least the opportunity to present our evidence at a hearing”said the former mayor of New York. Unfortunately, the censorship continues. We hope the Third Circuit will be as gracious as Judge Brann in deciding our appeal one way or another as quickly as possible. This is another case that seems to be moving rapidly towards the Supreme Court. “

The White House press secretary, Kayleigh McEnany, added to the position of Giuliani in defense of President Trump, returning to speak of the 234 affidavits in Michigan that “prove” fraud, although no court has so far given credibility to the accusations.

“We have 234 affidavits in Michigan, from voters in a county,” McEnany said. “‘I showed up to vote, they told me that I could not cast my ballot, because there is a mail ballot that was issued in my name and that I did not cast,'” the spokeswoman said about one of the cases.

President Trump’s defense team alleges fraud, but at the press conference last Thursday Giuliani did not explain the scheme that accuses, where supposedly “Hugo Chávez participated”, the president of Venezuela who died in 2013.

The attacks that the lawyers accuse are from China, Cuba and Venezuela, although there was no evidence of this, claiming that they were gathering the data, because “it was not easy.”

Maryland Gov. Larry Hogan says he is “embarrassed that more people in the party aren’t speaking up” regarding President Trumps’ refusal to concede https://t.co/2wEl0kWIoX #CNNSOTU pic.twitter.com/ht8v9oi0O5

Criticisms of President Trump and his legal team add more voices from the Republican side, including allies of the president, such as the former governor of New Jersey, Chris Christie, who pointed out that the defense led by Giuliani has not presented “any evidence of fraud”, in addition to qualifying it as a “disgrace”.

“If you have the evidence of fraud, present it”Christie demanded on ABC News. “Frankly, the conduct of the president’s legal team has been a national disgrace.”

Although Georgia will recount its presidential ballots, following a Trump campaign request on Saturday it is highly unlikely that the recount will change the result that was in favor of Democrat Biden with 12,670 more votes.

Christie accused Giuliani and the team he leads of making “outlandish” accusations, mainly because in court they do not allege fraud as they do in the public arena,

The criticism was added by the Republican governor of Maryland, Larry Hogan, who on CNN considered that the efforts of President Trump’s re-election campaign are leaving the country very badly.

“We used to go oversee elections around the world, and we were the most respected country, you know, when it came to elections. Now we begin to look like we are a banana republic, ”he said. “It is time for the nonsense to stop.”