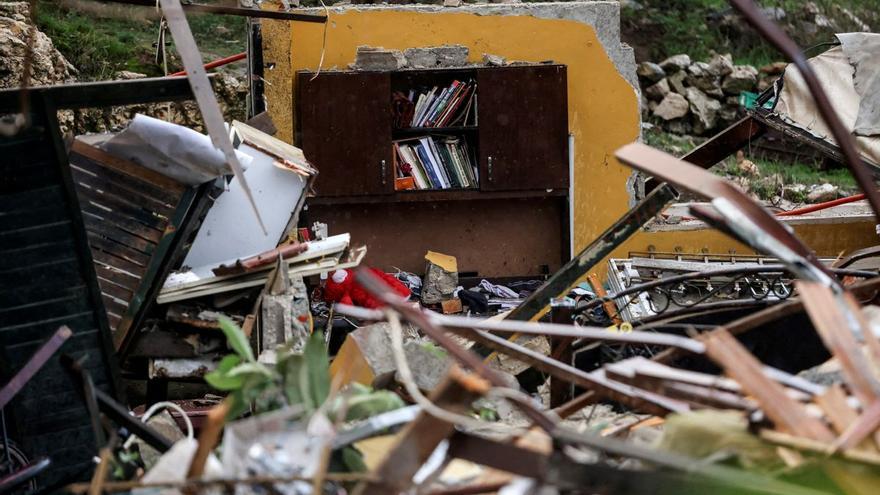 Jerusalem woke up soaked. To the east, in the occupied part of the city, the rain wet the remains of a house that had welcomed generations of Palestinians. the home of the Salhiya, with its 15 members, has been evicted this morning by the Israeli police to be subsequently demolished. Its about first eviction in the controversial neighborhood of Sheij Jarrah from 2017. At half past three in the morning and with hardly any witnesses enduring the cold, the bulldozers have turned the lives of these 15 Palestinians into ruins. And they have broken the spirit of the other families in the neighborhood in legal disputes to keep their home.

On the fridge door they remain immaculate three family portraits. Between mismatched shoes and books scattered on the floor, stands a pink backpack of the smallest in the house, Aya, nine years old. Having been violently expelled from their home, the Salhiyas have not been able to take any of their belongings with them. Later, the Israeli police proceeded to detain 18 peopleincluding the patriarch, Mahmud Salhiya, and five Israelis, suspected of “violating a court order, violent fortification and disturbing public order”.

1/ After forcefully evicting the Salhiye family in freezing temperatures overnight, the Israeli authorities proceeded to raze their homes and all remaining structures on their property. Uprooted from Ein Kerem in 1948, they have now been displaced & left homeless for a 2nd time. pic.twitter.com/QdJdxnJX2b

Earlier this week, Mahmoud climbed onto the roof of his house with gas cylinders. “We will not run away again, we have no other place to go“, he shouted. “You already expelled us once in 1948; either we die in our house or we live, we are not leaving,” he defended. And on Monday they did not leave. After hours of negotiation with the Israeli police, the agents left, but not before demolishing the Plant nursery of the property, which was one of the economic supports of the family.

The Jerusalem municipality he won the legal battle to expropriate his land and build a special needs school and daycare there. The Salhiya family argues that it has decades living there since before Israel captured and occupied the eastern part of the city in 1967 but the Israeli court ruled against it. Dozens of Palestinian activists have criticized the city council for kicking out a family when there is a wasteland that the municipality gave free of charge to an ultra-Orthodox organization to build a religious yeshiva, a center for Torah and Talmud studies.

My hands are shaking. This is what their home looks like now: The Salhiye family of 15, kicked out in this freezing weather from their home in Sheikh Jarrah. pic.twitter.com/B0ay1TBP7g

Sheikh Jarrah is not only home to thousands of Palestinians who fled their homes in now Israeli territory during the Nakba, the catastrophe of 1948. It is also the diplomatic and foreign quarter and where the main consulates of Western countries are located. Precisely the land where the Salhiya have lived since the 1950s is located right in front of the British delegation. The affected families and the activists who accompany them criticize the lack of action and reproaches to the Israeli authorities by these diplomatic representatives.

More of 1,200 Palestinians they were displaced in 2021 by the demolitions of their homes in East Jerusalem and the occupied West Bank. Dozens of Palestinian families in the eastern part of the Holy City run the risk of being evicted by settler organizations Jews. Thousands more face the threat of demolition because of discriminatory policies that make it extremely difficult for Palestinians to build new houses or expand existing ones. “Ethnic cleansing” is how the Palestinians describe the expulsion and destruction of their homes.

I’m fuming.
Israeli settlers (including their military) are arresting children in Naqab, putting them under torture, no legal representation, and at the same time demolishing their homes & making entire communities homeless. Same in Beita. Same in Sheikh Jarrah. It’s so violent

They were precisely the protests in favor of the families of Sheikh Jarrah and other neighborhoods, locked in legal battles for decades, and the violent police response that lit the fuse for the clashes last May. During 11 days, Hamas and Israel clashed in the skies, leaving more than 250 Palestinian dead in the Gaza Strip and 13 on the Israeli side. This first eviction in five years sets a dangerous precedent for the rest of the Palestinians pending their cases in Israeli justice.

Jerusalem, and the Jerusalemites, await a nevada. Without any compensation, the 15 members of the Salhiya family have remained without a roof to protect them from the imminent white mantle that will cover the city. Out of desperation, they ask for financial support from those who want to help. Seven decades after their first expulsion, the Salhiya once again become refugees on their own land.