A drill was planned. So everyone, including the two presidents, the Spanish, Pedro Sánchez, and the Lithuanian, Gitanas Nauseda, began calmly thinking that it was just that. Even some military commanders believed it. But then the pilot of the Eurofighter, the elite fighter plane of the Spanish air force, shouted at his controls: “It’s alpha! It’s alpha! ”. In the military code, this implies a real operation, while “tango” would be a maneuver or a drill. “It is a real alert,” began to clarify some military. The Lithuanian president seemed amused, thinking that it was a simulation or very used to these situations, since he lives in a country in permanent tension with Russia and Belarus, his troublesome neighbors. Sánchez had to warn him that the appearance they were starring had to be suspended. “No, President, there is an Alfa Scramble,” said the Spanish to the Lithuanian, already in military code. In a few minutes – about 12 – the hangar that this Thursday had become a set for the appearance with flags, sound equipment, cameras, translators, journalists and soldiers in formation, was emptied so that two Eurofighters were fired in search of two Russian fighters flying over the Baltic sky without authorization and without responding to calls from NATO controllers.

The Spanish soldiers stationed at the Lithuanian base of Siauliai, about 140, most of them in Albacete, where the Eurofighter’s central base in Spain is, ran at full speed to get out of the way of the plane. The journalists and the official delegation were a little slower. “This is a real alert, we must go faster,” insisted the military. Sánchez, who had been warned that these situations occur with certain frequency and can occur at any time, seemed very calm. In fact, he was among the last to walk away.

The incident, more than an anecdote, was very useful, according to the Spanish president, to demonstrate the importance of a mission like this and also of the three-day trip itself to the Baltic republics, strategic allies in NATO and the EU and obsessed with the Russian threat, which is felt in this area almost daily. 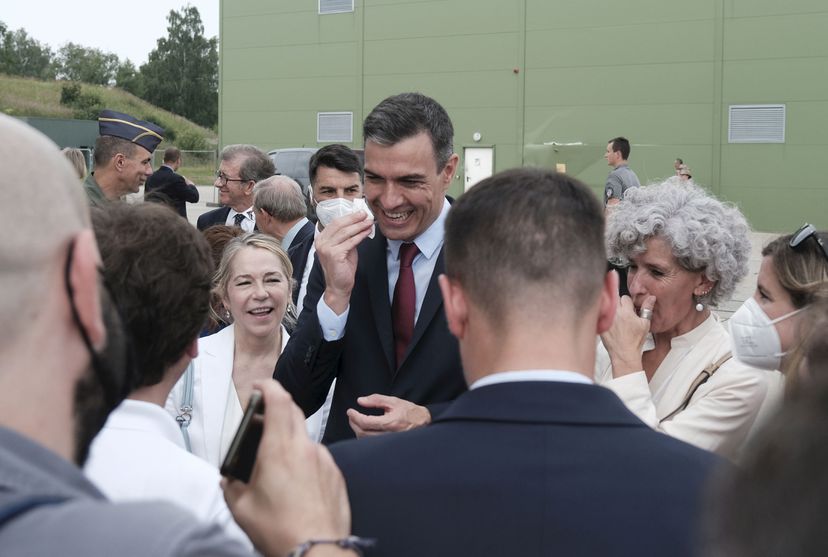 Pedro Sánchez speaks with a group of journalists after the event. On video, statements by the President of Spain about what happened.

The Spanish military and members of Sánchez’s delegation, who travel with the head of National Security, General Miguel Ángel Ballesteros, are convinced that nothing that happened was a coincidence. The Russians measure every step. And they are constantly looking for the limits and the reaction capacity of NATO and in this case of the Spanish, who are the ones in command of this base for a few months. The Russians obviously knew about Sánchez and Nauseda’s visit to the base, and they chose that moment to launch a maneuver that the military understands as a clear provocation. The mission of the Spaniards, who currently have seven Eurofighter fighters in Lithuania, is to act as “air police”, go to meet the aircraft, stand to the sides and communicate with them to warn them that they cannot cross the airspace of the three Baltic republics. “I don’t know if it was a premeditated provocation, but it does highlight the importance of the Spanish mission and the need for collaboration. Today all Spaniards have seen the good work of the air forces, ”said Sánchez after the incident.

This type of Russian provocation is frequent, but they had not had any alert for 18 days, so the Spanish military believe that the date was not accidental. In fact, when there are NATO maneuvers or a visit from an authority, how happened this Thursday, it is common for an aircraft to take off from a Russian base that does not have authorization or has indicated its roadmap or activates the device. that all planes take to be identified. Eurofighters, according to NATO code, must be in the air for a maximum of 15 minutes after the alarm goes off. That’s why the pilots are permanently alert and the planes are ready. This time, with the need to remove lecterns and presidents, it took 12. The planes fly at full speed to the Baltic Sea to meet the Russian fighters to ensure that they do not enter the airspace protected by NATO.

In his tour of the last three days through the Baltic republics of Estonia, Latvia and Lithuania, Sanchez has found much appreciation from the countries of the area for the solidarity of Spain and other EU and NATO partners in the face of Russian pressure. Every day, Baltic journalists have asked the Spanish president about the Russian threat and the demand that the EU respond together, in the face of the more lukewarm positions of Germany and France. Sánchez is listed closer to the Baltics, although he has insisted that dialogue with Russia must be maintained on essential global issues such as the fight against climate change.

Sánchez, who took advantage of the visit to meet Arvydas Sabonis, the Lithuanian basketball star, an idol for the president, closed the Baltic tour with a meeting in Vilna, the capital of Lithuania, with the main opposition leader of Belarus, Svetlana Tijanovskaya, who he was unable to receive during his visit to Madrid a few months ago because he was in quarantine for covid-19. The appointment is a gesture against Moscow and its Belarusian ally. The Baltic countries have been strong advocates of the imposition of sanctions on Belarus in the wake of last August’s presidential elections, in which Alexander Lukashenko won a sixth term not recognized by the opposition or the EU, and more recently after the hard landing. to which Minsk forced a Ryanair flight to Vilnius to arrest an opposition journalist. The prime minister, Ingrida Simonyte, was very tough with her neighbor Lukashenko in a subsequent joint conference with Sánchez. “The regime is becoming more and more aggressive. With the sham of the invalid elections Europe is discovering what is happening with Lukashenko. This regime concerns us all. Nobody is delusional anymore. The EU has to be forceful. All political prisoners have to be released ”. Sánchez was softer, although the gesture of meeting with the opposition leader was very eloquent.

The president returns this Thursday to Madrid and shortly thereafter begins another long trip, this time to the US and with economic content, to visit investors and convince them to enter Spain now that the recovery arrives. His intention is also to meet Apple, the great technology company in Silicon Valley. Sánchez will not meet Joe Biden, the US president, with whom he has still not had a broad meeting since he was elected to lead the White House. In La Moncloa they assure that the objective of this trip is strictly economic and there will be time to meet with the Biden administration.

Sánchez thus multiplies his international agenda while in Spain the tension with the Generalitat is complicated – the issue has persecuted him in the Baltic tour and even two independentists in Riga (Latvia) raised a star flag in an official act – and insists on cooling the possibility of an imminent change of government. All the sources consulted assume that it will occur, although it may be left until after the summer. For now, travel makes it difficult to do it. Although there is always room for a surprise that depends exclusively on the president.