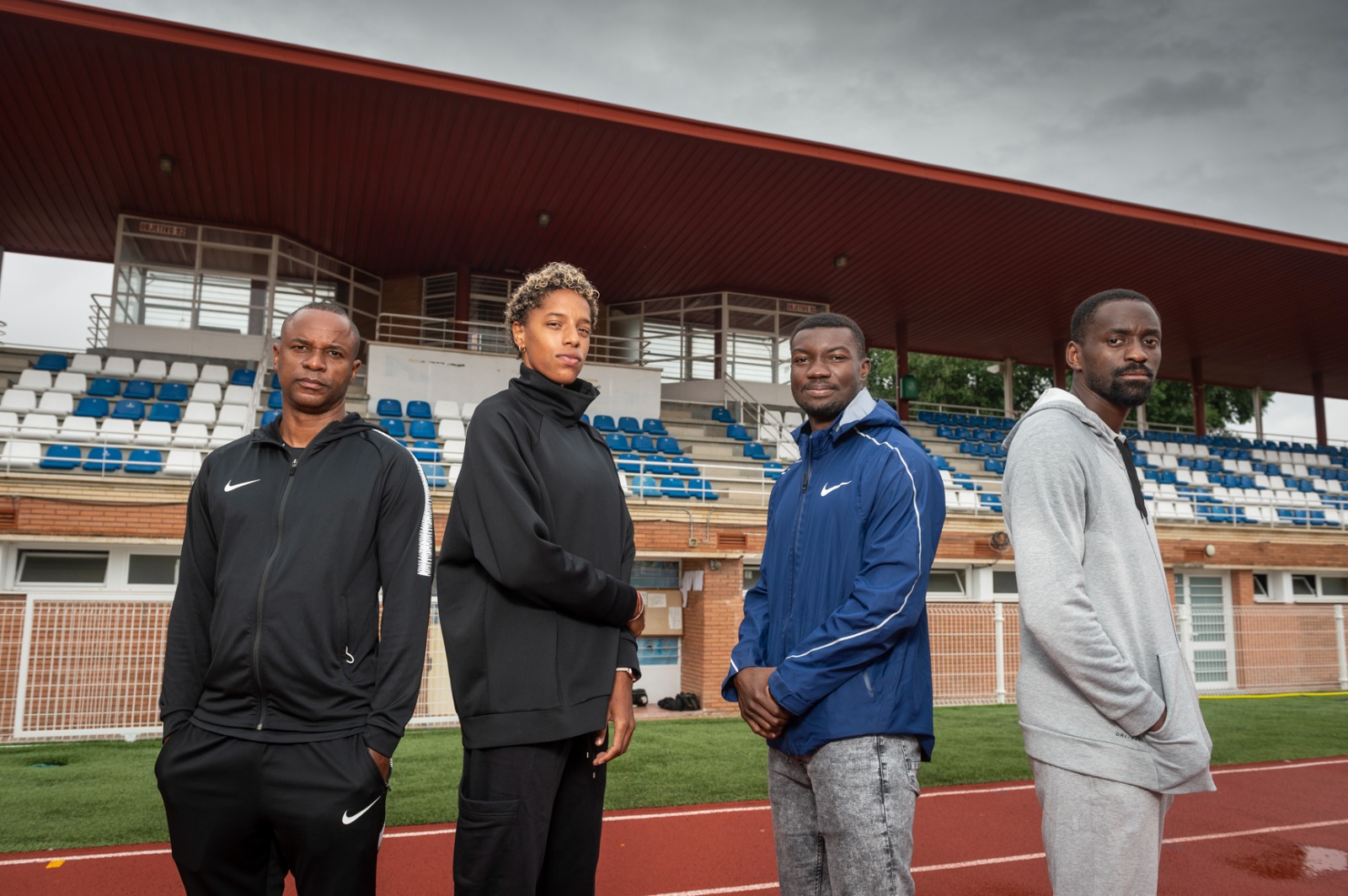 The story is known and speaks in a certain way of a force that is destiny, and it is not only destiny, but the desire that accelerates it and makes it inevitable. Yulimar Rojas (world record holder indoor triple jump, 15.43m) was 16 years old when he saw Teddy Tamgho win the 2013 World Cup in Moscow and go running to hug his coach, Iván Pedroso. At that moment, the Venezuelan decided what she wanted to be in life, a triple jumper, and who would lead her to be the best. Eight years later, the three of them, the Venezuelan jumper, who is already world champion, Teddy Tamgho, who has already become a coach and guide to the favorite of the Games, the athlete from Burkina Faso Hughes Zango (18.07m, world record in covered track), one of the only seven that in history have jumped more than 18 meters, and Iván Pedroso, who supports everyone, are together in Guadalajara, Spain, one rainy morning, a few weeks before the Games that aspire to win, of course. It would be the great triumph of what could be called the Afro-Cuban school of the triple, like the music of the island, like the Cameroonian roots of Tamgho, the African strength of Zango, the bronze medalist in Doha, the Cuban passion of Pedroso, the joyful Caribbean of Red. And the Galician-African Ana Peleteiro is also there, hungry for a medal. The best of the world triple jump. This Sunday (13.20) is the women’s final; on Tuesday (2.00), the male.

Pedroso talks about this, whose record as an Olympic jumper, several times world champion, Olympic champion, only needs to have been the one who broke the world record of Bob Beamon, and Tamgho, 32, another of the 18 meters who injuries have forced him to retire before reaching Olympic success. Their relationship is one of athlete-teacher-colleague-student … And Tamgho, a Frenchman, speaks more Cuban than Pedroso, a 48-year-old from Havana, and although he has never been to Cuba, he is more Cuban than anyone.

Tamgho. Cuba is the land of the triple jump, the best school of all time. A person who practices the triple jump and does not talk to you about Cuba is that he does not know anything about the triple jump. I can tell you about everything, about Lázaro Betancourt, Yoelvi Quesada, Aliacer Urrutia and the crazy Yasmani Copello and all those. We have many points in common, that’s why we are together. We have the same hunger to do good things. And when we dedicate ourselves to something we do it 100%, with a lot of passion. And that we are always sharing that ambition. When I called Iván Pedroso in 2010 to train me, it was because Iván is a sports star, not just in length, in all of sport. When I realized it, when I found out that he was becoming a coach, for me it was like the green light to learn more about the Cuban way, about how he trains, and I also know that if in my career I wanted to jump more and better in the big championships, I needed him.

Pedroso. Yes, the triple came to America through Brazil, Oliveira, Da Silva … and Cuba has always done training sessions in Brazil, but, as Teddy is saying, we have a school in Cuba that is one of the best, that’s why athletes appear every year 16, 17 years old, already jumping 17 meters. And that is very difficult. And it’s not just genetic. I have always followed the training system of my coach in Cuba, Milan Matos, the poet, who was the one who taught me, but we never married with a single methodology, we were always very open, as Milan was and how he taught me. Open to the Americans, who were very fast; the Russians, who were very strong, and when I met Teddy, who had the opportunity to go to France, with the French school, which is very good triple, I learned another very important thing too, and now we have joined him everything. What did I learn in France? Ah no, those are state secrets …

T. Secrets of us … technical details. And we have put everything together and created a system that works … And Rojas, Zango, Peleteiro, are the example that it works. As I told Iván a few days ago, when Iván began to train Yuli she was not classified for the World Cup, and the following year she jumped 70 centimeters more and was silver in the Rio Games. And with me Zango did much the same. We know from the experience of our career, and we have worked together, and all that mixed together, we have achieved many things together. As Iván has said just now, we have built a very effective system that works with very different athletes. We adapt to athletes. We are open, as Ivan says. For example, you have Zango and we are going to know what he needs. And for her too. The system is not unique. We know many things and we are open to continue learning.

P. Zango is a strong athlete, he comes from Africa; Ana is fast; Yuli is fast, explosive. They may agree on some things in training, but now, when it comes to competition, each one needs something different … That is where the difference lies. You can never treat all athletes the same.

T. We are not talking about the world record. Let’s see, let’s see … That’s the future.

P. We don’t think about that. We think that if we continue working as we are, it will also come out, as the indoor track did … Records are not sought. It’s Hughes’s dream, Yuli’s dream, we know that. And we want it too, but in due course.

T. You have to focus. First is the process. If the process is good, then it comes out on its own. Tokyo is not a rally. We have prepared it to win it. Prepare the condition, the technique, everything … Everything to win, to win, to win … And if you need to jump the world record to win, then you are ready to do it. Win first and then do whatever you want. And that’s what we tell them: you have to prepare to win, always, always, always … We are not here for the brand. The brand comes and goes.

T. We come to Guadalajara from France seasonally since 2019 …

P. Whenever we have some important competition we meet here. We are a group of athletes with two coaches. That is the goal.

T. If I am, Iván leaves; and on the contrary, the same. We accompany our athletes and our athletes indistinctly to competitions.

P. I was recently in Doha with Yulimar and Teddy did not have to go to the European Cup, but we talked and he went there so that Ana was not alone. That is one more way to show friendship, but a selfless friendship. We are family now. That is the important thing.

T. I am discovering new things with Hughes. I was too focused on athletics. If we talk about a system, he has a system that works. He knows what he has to do, his program. He knew he wanted to dedicate 200% to preparing for the Games, and he told himself that in the month of May he would go to work, to carry out research work for his electrical engineering thesis, and then months without pay and do whatever it takes for the Games.

P. Yuli is just athletics, but she doesn’t get overwhelmed. Okay, okay. It has had a lot of work, similar. He was not at the university, but he was in Venezuela, he rested a lot, and we have done only one preparation. It has served us. She is ready. With hunger, which is the important thing, it is what we transmit to our athletes. If you are not hungry, look for it. It is not training to go to the Games, it is training to go to fight until the end. Yulimar is fast, she is active, she is strong, she is 1.92 meters tall and her stride has to be wide. And it moves faster than the ones that are smaller.

T. It is the most powerful of all time in length and triple. And I think Ivan knows it too. When we have seen his 7.27m in length, in his first competition, but like this, easy, it shows that he has not worked that, he can break everything he wants if he is hungry and confident in the process. You can do whatever you want. I couldn’t dub in Tokyo because the programming doesn’t allow it, but who could have known there was such a girl? He didn’t do a long jump, but now they know. Next year we will. Only Ivan knew.

P. But it is a pity that they have put the qualification of length the same day of the final of triple. They could wait at least one more day. Let’s go triple.

T. You have to focus and get the Olympic title of your specialty. If you get it, the rest, with pleasure.

P. And to me, even though I was champion of length, I always liked the triple more. Just that I jumped eight meters earlier, and focused on length ,,,