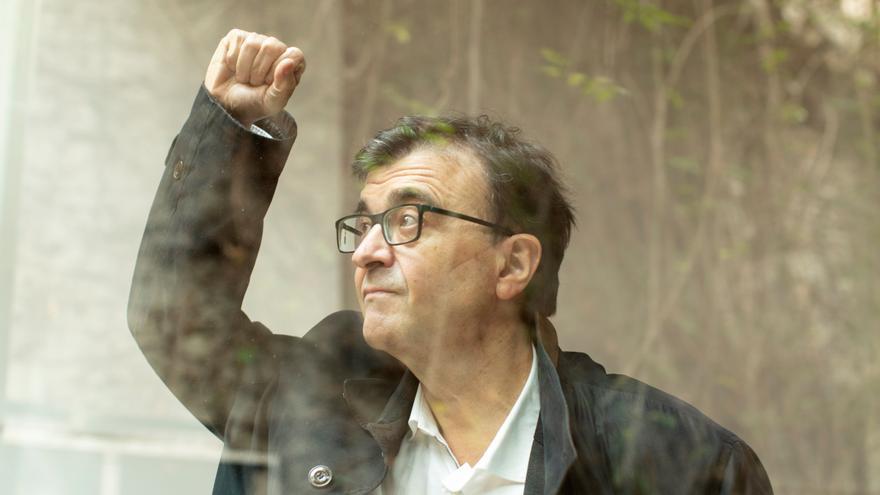 When the 2019 Planet award was made public, everyone asked Javier Cercas if his novel, the first of a police cycle starring the mosso d’esquadra Melchor Marín, was about the ‘procés’. And he claimed not. But with a quarrelsome title like ‘Independencia’ (Tusquets) he can no longer deny it, although it is not exactly the account of Catalan politics in recent years either. Whoever believes that this is about Puigdemont and Rajoy is wrong.

Cercas has sent his hero to the year 2025 when, according to his fiction, the ‘procés’ and the pandemic are already a thing of the past. The agent, now a widower, has been forced to move to Barcelona from Terra Alta to try to discover who is behind the blackmail directed at the mayor of Barcelona -which is not Ada Colau but her successor-, a former progressive founder of a new xenophobic party, threatened with a sex video.

Why have you titled this novel ‘Independencia’ when the direct allusions to ‘procés’ only occupy a couple of pages?

I love ambiguous, polysemic and misleading titles. Umberto Eco said that the best title in world literature was ‘The Three Musketeers’, because there were four of them. Independence is a great word.

That would be a funny title for this interview.

We tend to think of political independence but there are many kinds of independence and they are all positive, except for politics because I am rather dependentista. The more we depend on each other, the better, because that is how the elites, the powerful and the rich do not triumph. That’s what this novel is about. One of the characters in the book, Ricky Ramírez, was told at home “get close to the good guys.” The same advice that his mother gives Lázaro de Tormes. The problem is that Ramírez misunderstands it and believes that they have told him to get close to the rich and the powerful. That is their mistake because what the rich do is use it as toilet paper.

And what does that have to do with independence?

It can be read as a metaphor for what has happened. A political elite, to get out of the economic crisis of 2008, did everything possible to take people to the streets with the bait of utopia available: a wonderful country where we will all be happy. The idea was to overcome the crisis in the most comfortable way by putting pressure on the central government. The problem is that people believed it, the elites lost control of the situation and now they are scared because taking people to the streets is easy but putting them back is very difficult.

That is the thesis put into the mouth of the former mayor, a guy convinced that the new party is going to take over the Generalitat.

In the strip you can read that it is a furious plea against the tyranny of the money masters and I like that. The central theme of this cycle, which will have four or five novels, is justice.

You have moved the action to 2025. Do you think that near future will be in tune with reality?

The novels are not written only with reason, anger and pain also come into play. Those few years of headroom have given me total freedom. Is a xenophobic mayoress in Barcelona credible? I wrote this before Vox placed 11 deputies in Parliament. And of course I hope that Barcelona does not end up being a deeply corrupt city council where brutality and cynicism reign, but unfortunately it is plausible.

He has imagined a new party that is nourished by people from the old Convergència, the PP and even the left.

The Catalan elites, and in that they are not different from the Spanish ones, arise from a few families that are always the same, capable of transforming themselves and adopting different forms and masks. But there they are. Democracy is the only instrument we have invented to defend ourselves against the owners of money and the masters of power. Burning containers is useless.

As proposed in 2012, that ended in 2017. Now we are in another stage that I am not saying is better or worse. If the novel speaks of ‘procés’ in the past tense, it is because it is over. And I do not say it, it says a lot of independence that privately confesses that it got out of hand. Now we are in shock.

The riots have once again called into question the actions of the Mossos. The Mossos live in a kind of Dragon Khan, suddenly they are absolute heroes and the next day, the worst villains. I have spoken with many of them to write this and I have met professionals who do their best work and nothing more. Many times it is forgotten that they are a judicial police that is at the service of the judges and obviously the Catalan political class tries to politicize them and that is why they are very angry, due to the lack of support. Politicians try to colonize all institutions and secessionists are no different. They are using that democratic instrument for their own interests.

Going to the fine print, a woman lost an eye to a foam bullet.

That is another issue. A very serious issue that has nothing to do with Melchor Marín, who is certainly not in riot gear.

Melchior is not a pristine hero.

Someone defined him as a good bad cop. A sane and crazy Don Quixote at the same time. You could say that he is very good with the good guys and very bad with the bad guys. He is a character full of fury and remorse and at the same time, let’s put it that way, a clean of heart.

He is a pure of heart who legitimizes revenge. I do not know.

Is it legal to take revenge? To that question, any civilized person would answer a sharp no. And yet literature is capable of making the reader uncomfortable in a moral way. Look at Michael Corleone. We know he is a murderer but we identify with him when we see him screaming for the death of his daughter at the Teatro Máximo in Palermo.

A Melchor one of his colleagues calls him Spanish.

Yes, but affectionately, he is one of her best friends.

Have you ever been called that?

I am from Girona, where everyone seems to have become sovereign and now I live in Verges, which is the most independent town in Catalonia. But I’ve never been called that. People go about their business taking care of the real problem that is getting their lives forward. Now, when politicians warm up the atmosphere, things get complicated. That there are people who have demonized me is their problem, not mine.

Have you ever considered writing in Catalan?

Catalan is the language we speak at home. I have written in Catalan in newspapers and I studied Catalan Philology. Joan Ferrater, who was my teacher, told me that I was the first Catalan writer in Spanish.

He forgot about Barral, Gil de Biedma or Marsé.

That’s what I told him. But he clarified to me that I was the first to have grown up in a Catalan-speaking environment. And it’s true, I didn’t actually have a relationship with authors in Spanish until I was 37 or 38 years old. Those were other times, the problem is not the language, it never has been, the problem is power.

There were people who reproached him for having presented himself to the Planet and with a detective novel no less.

If someone wants to read this as a detective novel, that’s fine with me. The truth is that in all my novels there is always an enigma. I did not write ‘Terra Alta’ to win the Planet, the reality is the opposite. I wrote the novel and then I introduced myself. But come on, people are going to keep thinking badly.

There is a John Ford movie that has always been with him, ‘The Man Who Killed Liberty Valance’. Arguably, many of his novels are rewrites of that story. This one too.

(Laughs) That would be like trying to write ‘Don Quixote’ again, but I did educate myself by reading adventure novels and watching westerns that are the assumption of the epic lost by the novel in the twentieth century. I would like to recover the popular spirit of the greats like John Ford, or Victor Hugo from ‘Les Miserables’. I like that humility and unpretentiousness. I am not saying that it is the only good literature. Kafka in life had hardly any readers and is now one of the most widely read authors in the world. Hopefully the novel will say important things to people again because if not I’m afraid they will die.