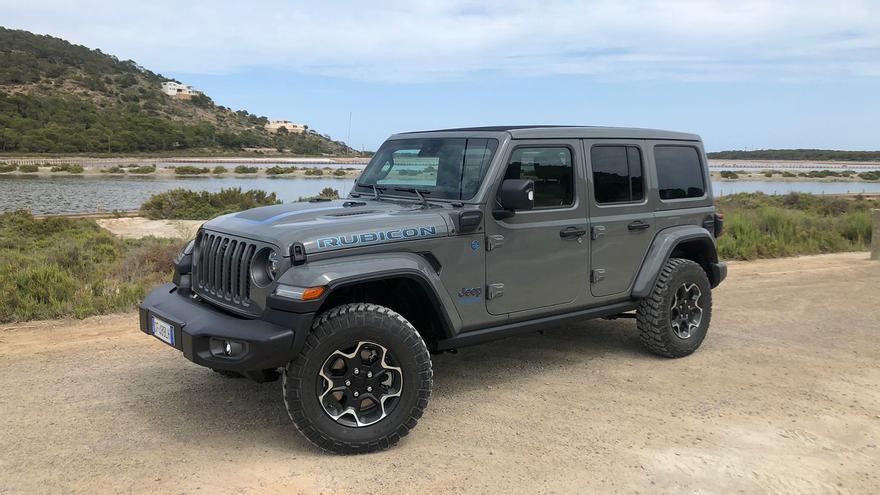 Jeep it is immersed in its electrification process. It started with the Renegade and the Compass, its largest volume vehicles on the market, and in the future it will venture with the Grand Cherokee, which will arrive next year. Now it’s up to your most recognizable vehicle, its icon: the Wrangler. The all-rounder of the group’s brand Stellantis debuts in the plug-in world with its 4xe version, available in its finishes Sahara, Rubicon Y 80th Anniversary.

Jeep has insisted a lot that he has wanted to preserve the essence of the model, so the aesthetic changes are minimal, and, of course, they have not wanted to subtract one iota of its capacity offroadBecause the Wrangler is made by and for off-road enjoyment. The result is a variant More powerful than any of its combustion equivalents, although somewhat more expensive, and more efficient that not only meets what the company seeks, but also improves in some aspects, such as its off-road behavior.

Aesthetically, on the outside the main changes focus on details that will make this version more identifiable. In that sense, both the logo Jeep, the 4xe, the Trail Rated and the inscription Wrangler Unlimited They are presented in a new electric blue shade. The Rubicon it will also add a black vinyl on the hood with the 4xe logo on one side. It also includes exclusive tires of the variant.

Inside there are more changes, mainly concentrated in the instrument panel, which eliminates the analog speedometer and replaces it with an energy use indicator, leaving the speed information for the central display. The tachometer is maintained. Of course, you have graphics dedicated to the state of charge of the battery. The E-Selec, to choose between the mode hybrid, the 100% electric and the E-Save, to charge the battery while driving. The last novelty will be some LED indicators on the dashboard that indicate the status of the charge when plugged into a charger. The Rubicon adds blue contrast stitching to the cabin. Retains 8.4-inch screen for compatible infotainment system Apple CarPlay Y Android Auto.

380 CV with a contained consumption

The Jeep Wrangler 4xe it is powered by combining a gasoline engine 2.0 turbocharged 272 hp of power associated with an eight-speed automatic gearbox signed by ZF with two electric motors, one for starting, to generate energy and to support the rest of the propellants; and another from 145 CV y ​​245 Nm of maximum torque that works in hybrid mode and in 100% electric mode. Together they add up 380 hp of power and 637 Nm of maximum torquemaking it instantly the most powerful Wrangler available.

A battery of 17,4 kWh guarantees energy to, according to the brand data, circulate more than 53 kilometers in 100% electric mode in an urban environment and around 45 kilometers on other types of road, thus sticking the label ‘zero emissions‘of the DGT on your windshield. For charging, Jeep has opted to limit it to low powers, 7.4 kW or less, with what it takes two hours and half to reach 100%. Consumption in hybrid mode, according to Jeep, is 3.5 liters per 100 kilometers, 4.1 liters in the case of the Rubicon.

Better off the tarmac

The off-road capability remains intact, as the brand has transformed its vehicle into a plug-in car without eliminating any previously present systems. The battery is located under the rear bench, also maintaining the entire boot capacity, 533 liters. In the finishes Sahara Y 80th Anniversary has the system Selec-Trac, which will tailor traction and torque delivery to the needs of the terrain. The Rubicon will continue to count on him Rock-Trac, with four traction options that go from two wheels without gearboxes to all-wheel drive with gearbox.

There is no lack of equipment known as the limited slip differential, Dana axles, electric locking of both axles or, in the case of the Rubicon, the disconnection of the front stabilizer bar, among many other systems that guarantee good behavior off the asphalt. In addition, with electrification, the Wrangler benefits from the benefits of electric power, such as instant pair. Finally, the front camera is added for the first time, which improves visibility in difficult terrain.

On assistive technology and safety terms maintains the equipment of the combustion variants, with systems such as adaptive cruise control, blind spot detector, lane keeping control or signal reader, among others.

This is the range

Comes the Wrangler 4xe and, at the same time, Jeep eliminates diesel options from its SUV range, keeping a gasoline variant with the same engine 2.0 of 272 HP power for all your finishes, including Sport. The 4xe will be available in the rest, the aforementioned Sahara, Rubicon and 80th Anniversary.

Once electrified, the Wrangler departs from the 68.900 euros in its finished Sahara, from the 70.800 euros for the Rubicon and from 72.300 euros for the 80th Anniversary. The combustion version starts from 65,500 euros. Jeep launches the plug-in off-roader with a commercial offering for the Rubicon trim consisting of an inlet of 15.300 euros and 36 installments of 360 euros and a final installment of 48,034.35 euros. Jeep offers a warranty of eight years or 160,000 kilometers for the battery and includes the program in the price Jeep Wave, with two years of maintenance, roadside assistance and other services included.