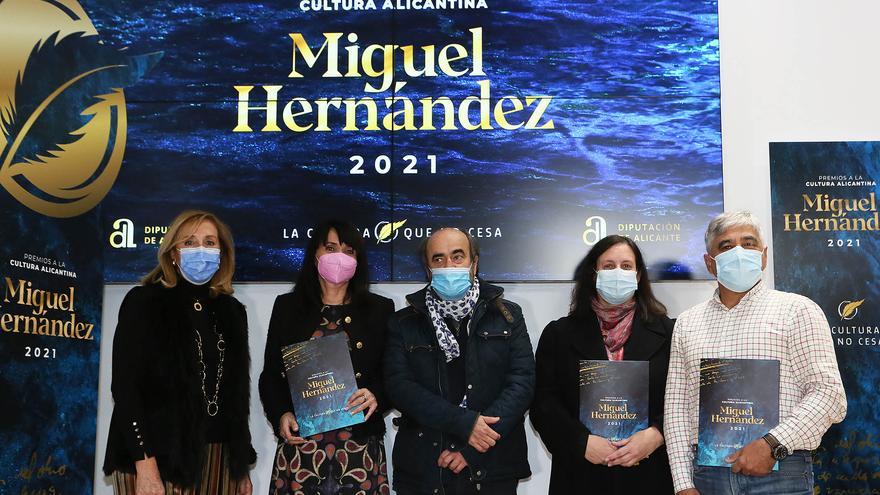 The Alicante Provincial Council delivers this Saturday the Miguel Hernández Alicantina Culture Awards, recently created, which aim to give visibility to those people, entities and groups of the province that stand out in different areas of culture. The first vice president and deputy for Culture, Julia Parra, and the members of the jury Pilar Tébar and Francisco Escudero today announced the names of the winners in the different categories, with names such as OtraDanza, Daniel G. Andújar, Joan Castejón, Pilar Blanco, Javier Marco and Juan Luis Mira, among the twenty winners.

The gala will be held at 7 p.m. in the ADDA. Admission is free, upon collection of the invitation in the auditorium, until full capacity is reached. For the first time, Parra pointed out, the covid passport Upon entering the ADDA and an official document proving identity, as well as the use of a mask.

Innovation to culture through information and communication technologies:

Promotion and dissemination of popular culture:

The prizes do not have an economic endowment and the winners, who will receive a trophy, have been selected by a jury, which has considered around fifty proposals.

Julia Parra has congratulated all those selected “which are only a few of all the candidacies that have been contemplated” and has highlighted that this initiative “will be a great opportunity to convey to the small and large promoters of culture the warmth and applause of the public”, a recognition “more necessary than ever, after some especially difficult years due to the hard interim imposed by the restrictions due to the pandemic ”.

Parra recalled that the initiative began to take shape a year ago, in the plenary session of November 2020, when the initial idea was unanimously approved.

The gala will be hosted by Luis Larrodera and will be enlivened with performances by the people from Alicante Ines Dominguez and the group Mailers.

Tickets can be collected today at the ADDA in the morning and tomorrow, Friday, also in the afternoon, at the premises located on Avenida Jijona, number 5.

To access the event it will be necessary to show the COVID passport and an official document proving identity in compliance with health regulations. Other security measures will also be applied, such as the mandatory use of a mask. The auditorium will open its doors 45 minutes before the start of the gala.

Also Read  What is the "genetic gold mine" that makes life possible in the Atacama desert, the driest on the planet