No titles are on the line but bragging rights will be on offer as Amir Khan and Kell Brook finally meet in the ring on Saturday night.

The former world champions, both 35, will end years of insults, bad blood and failed match-ups by finally putting their skills to the test at the Manchester Arena. 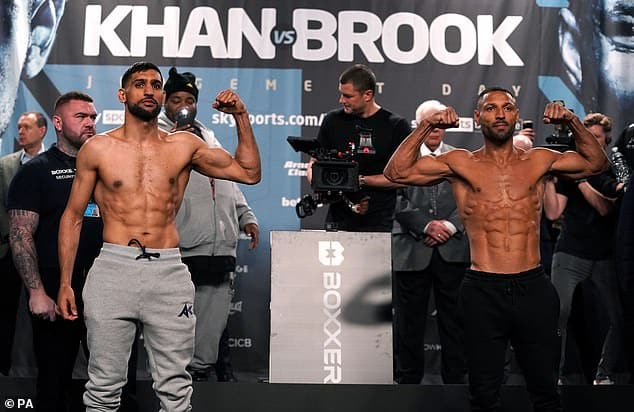 I genuinely fear for the mental state of whoever loses this. It’s personal, it’s nasty and, in Kell’s case, it’s the culmination of an obsession.

Ever since their amateur days, Amir has had the breaks and that professional jealousy has burned within Kell. He has chased this fight for years and viewed the excuses Amir continually put up as disrespectful.

He has believed he can beat Amir but the response has been almost like ‘why should you earn a single penny off me?’

I know Amir’s former trainer Virgil Hunter thought Kell too dangerous at one stage, now, with no big pay days elsewhere, he has had to take the fight the British public wants.

Everywhere they go, they get asked about fighting each other, there’s no escape, I’m not sure the loser gets over this. 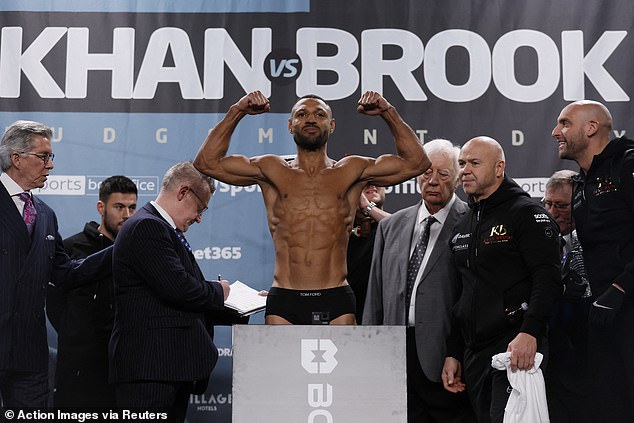 Amir’s strength has always been his blistering speed. His hands used to be like rotor blades on a helicopter; they moved that fast his feet were almost floating off the floor as he unloaded his punches.

The trouble is, as we witnessed in his fight with Terence Crawford, he isn’t as fast as he used to be. Without that speed it’s like cutting off Samson’s hair and consequently he must be smarter with his jab and boxing skill.

Kell’s forte has always been his timing. When a punch is thrown, he is very adept at evading it and countering in one movement. It’s akin to a great golf swing and he’s one of the best exponents of the counter punch. 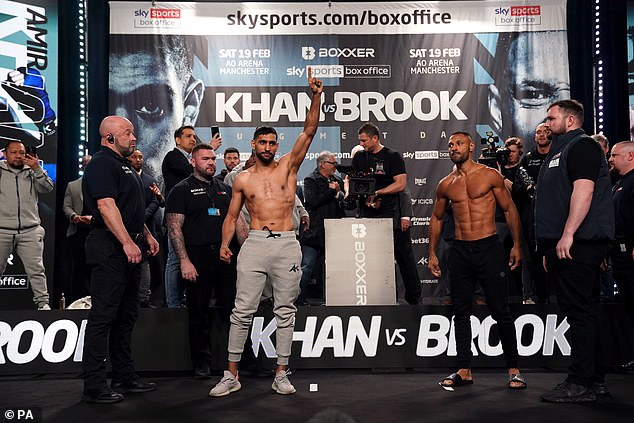 Amir Khan (centre) also weighed in within the catchweight limit, clocking in at 10st 7lbs 5oz

There was a time when these two could cut corners in training and rely on their natural assets to get them by on fight night. Now, with both 35 years old, that’s not possible.

One opponent fighters never beat is Father Time and these two have had to work extremely hard in camp to get close to what they were.

Amir without his speed is vulnerable. His brain is telling him he can still put himself into situations but his body tells a different story and it makes him easier to hit on the chin.

Kell’s danger points are his boiling emotion and fragile eye sockets. He’s had titanium plates put in to rebuild his face but he is only human. Once he starts getting hit around the eyes, it will be a mental test as to what he is prepared to take.

Will he be worrying about his eyesight if he takes too many jabs? Amir has already been mischievous asking ‘how are your eye sockets?’ It’s all part of trying to get into Kell’s head and he’ll do well to keep his cool. 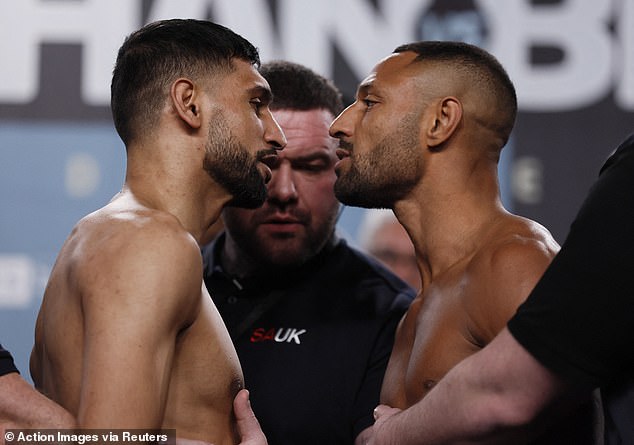 I’ve got a real issue with this. Picking 149lbs as a catchweight is a strategy that indicates Amir is wary of Kell. If you’ve waited this long to prove you are the better fighter then beat the best version of your opponent.

Amir knows Kell struggles more with getting weight off and it’s another effort to weaken him. I don’t respect that. There’s no title on the line so why not fight at 154lbs where they are both comfortable?

There was a £100,000 fine for every pound that they were over the limit but both made it. If I was Kell, with the amount of money in the pot, I would have been tempted to say ‘stuff you’, come in at a comfortable weight and pay a fine – whatever felt best to win the fight.

His trainer Dominic Ingle is no idiot. His nutritionist has been living with Kell and he’s looking like a racehorse.

Kell will want to make a blistering start but will be best tucking up tight initially, blocking and using his timing. He must keep emotion in check, box clever then step in to dictate the pace and befuddle Amir, maybe around the fifth round.

Amir has the skills and should box in and out, be disciplined, maybe targeting 150 shots each round to wear Kell down.

After the two were on TV with me on Gloves Are Off this week, most people thought Amir had won the mental battle.

The funny thing is off camera, I had Kell calling me saying ‘I should have said this or that’. They wind each other up but Amir is more media savvy.

Around the fight there have been plenty of sideshows like Terence Crawford turning up to support Amir. If anything that will serve as greater motivation for Kell.

It’s so close I wouldn’t put my house on either. We really don’t know what version of each fighter will turn up.

I’m intrigued that Amir has a trainer in Brian McIntyre who previously accused him of lacking heart. He must box with intelligence.

I’ve known Kell since he was a seven-year-old walking into the gym in Sheffield. He’s very strong, stubborn and, if he can control his emotions, that might see him edge this, just.

The loser should retire, and so should the winner. There may be a rematch but there’s nothing bigger left for them after this.