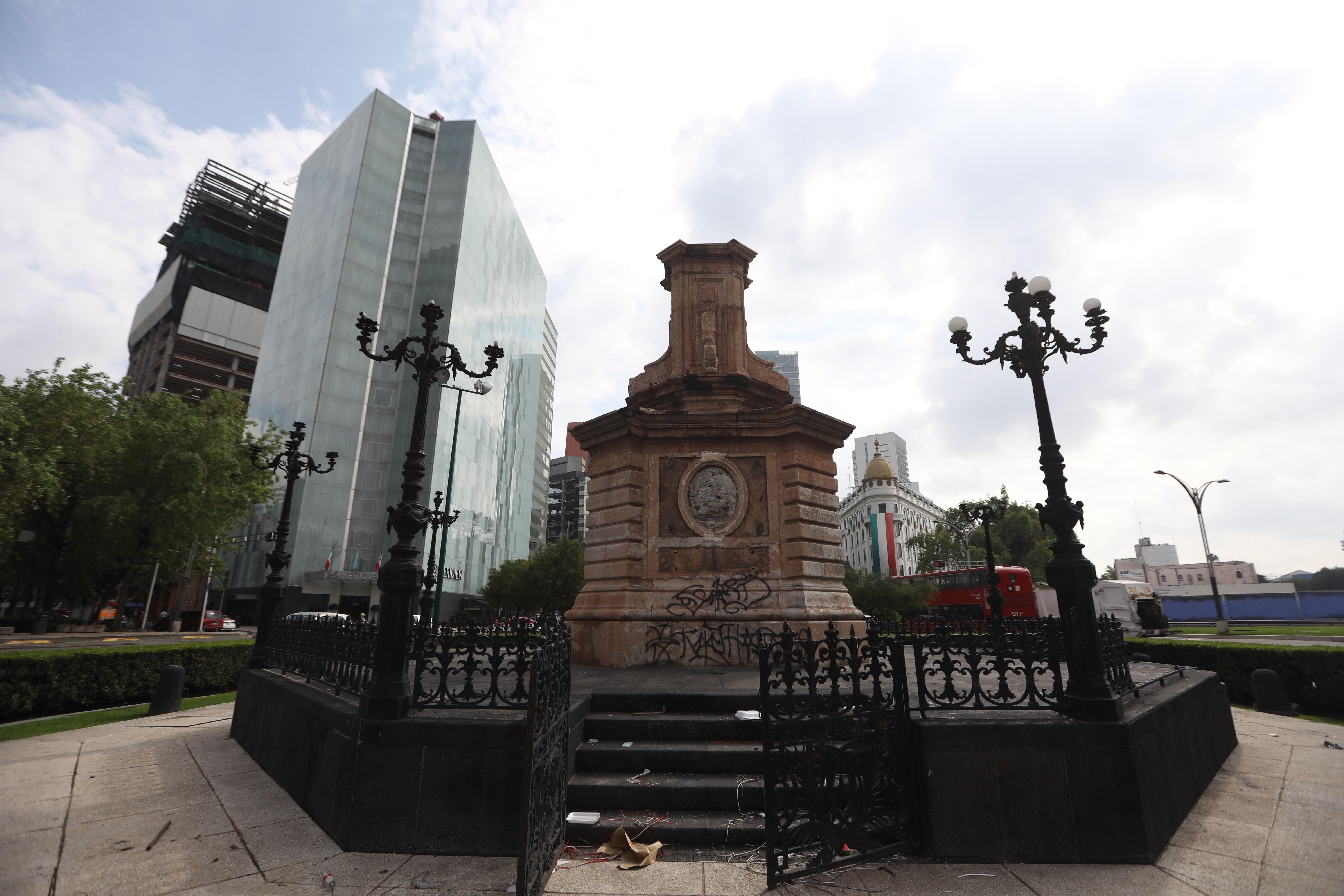 First, a man in a column, in the manner of Simon the Stylite, whom we assume to be white and European, dressed in a Renaissance tunic and doublet, with his right hand in the air – a gesture that implies magisterium, someone who presumes the lands that have just been discovered and he will appropriate himself in the name of the Crown of Castile—, on top of four other men, tonsured and reclined: Christopher Columbus and the friars Pedro de Gante, Bartolomé de las Casas, Juan Pérez de Marchena and Diego de Deza. Next, the stylized head of a woman, with almond-shaped eyes, full lips, a pierced septum and intertwined braids: her name, we are told, will be Tlali. Next, its antecedent: an Olmec head, with rather African and hopelessly masculine features, whose meaning escapes us. And, at the end, a white, bearded man —to his bad luck, not very different from the idealized images of the conquerors— who explains to us, with great erudition and poise, the meaning of the piece commissioned by the Government of the Mexico City to replace Colón.

Four images that presuppose many others: the Hispanic tradition that strives to turn Columbus into a superhero and the one, more recent, that identifies him as a primary symbol of imperialism in the Americas; the dozens of sculptures of the admiral demolished in the United States as a result of the murder of George Floyd at the hands of the police and those demolished in other parts of the continent; the Reform marches that, since 1992, have protested against Colón’s permanence from indigenous, anti-colonial or feminist perspectives; the headless statue of Columbus in Boston and the heads cut off by the hitmen of organized crime. And behind, other echoes: from the Roman arches to the anti-monumental ones; from the ruins of the Templo Mayor to the Virgin of Guadalupe and the cardboard-stone pyramid installed in the Zócalo; from the statue of Cuauhtémoc, not far from the roundabout in question, to the pieces that are preserved, not too far away, in Anthropology; and from the mestizo faces of passersby to the ruddy faces of tourists to the tanned skins of indigenous women who sell flowers or handicrafts on the camellones.

If the controversy has aroused so much interest, emotion and anger, it is because it concentrates some of the main tensions of our time. As often happens in this era of extreme polarization in the networks – that other supplantation of public space in our neoliberal era – the worst thing is the disdain for the lack of nuances that any debate on public space, memories and oblivion should imply , national identities and symbols.

Very soon the antagonists of López Obrador and Claudia Sheinbaum fiercely launched themselves against the removal of Columbus and the work of Pedro Reyes commissioned to replace him; on the other side, the followers of the 4T defended both actions with the same fury. At his side, a group spoke out in favor of defenestration, although deploring the choice of the artist, whether due to direct assignment or because it was a white man in charge of modeling an indigenous woman, and still others pointed out the cognitive dissonance of those who They demanded that the work be delegated to indigenous hands without being it either.

In the midst of these battles, ancestral struggles intersect that will not be resolved just by being in favor or against, and that will not conclude with a more authoritative or open consultation: the solution chosen, after the scandal, by the Head of Government. Because, contrary to what many assume, public space has never been an area of ​​peaceful coexistence —or not only that—, but almost its reverse: the place where different actors —individuals, groups, parties and authorities— measure their strength. , they confront, they fight with each other and, in the best of the cases, they reach agreements.

Since ancient times, power has always sought not only to appropriate public space, but also the future: monuments are frozen time. Physical manifestations of the desire to establish a unique historical discourse for future generations that, fortunately, is doomed to failure: the present rulers will never be able to secure the future, that unstable territory where new powers will be in charge of destroying, forgetting, reinterpreting or disrupt those vain attempts to stay.

Each monument – each sculpture placed in public space – reflects this tension between power and art, between the victors and the vanquished, between the rulers and the ruled, between money, censorship and self-censorship, between elites and the dispossessed. All seek to legitimize the power in turn, usually linking it to a heroic feat or origin. But, as time is the only thing that power cannot determine a priori, it often happens that the original intentions of the monument are lost or spoiled, and in rare cases they are incorporated as more or less constant symbols of a group, a collectivity. or a nation.

Hence the monuments seem made just to be substituted: a Roman temple instead of a Gallic or Iberian one, a church instead of a pagan altar — or a pyramid — an emblem of progress instead of a ruin, and so on. to infinity. What used to represent the establishment —A “discoverer”, a conqueror, a hero — today means the opposite. In this dynamic, it is almost ridiculous to discuss the relevance of removing Columbus: an anachronistic figure – and I am not referring to the historical Columbus, but his statue – who embodies the worst of colonialism – without reference to his last name – male, white and European . In any case, the best thing would be a broad public consultation, which would most likely lead to this colon to a winery.

More complex is what to replace it with. The trend in vogue – the episteme of the new powers in search of legitimation – assumes that the most convenient thing is to replace perpetrators with victims, as if this effort alone disrupted not only the public landscape, but past history and present injustices. If the symptom is Columbus, the natural thing would be to cure it with those who were erased because of him: the indigenous people. And if it is also about a woman, the new power assumes, without much reflection, an absolute success. An indigenous woman. Past, present, real, idealized?

The question, again, is not as simple as the power would like. To illustrate, I replicate here a wild hypothesis discussed among friends. What if Colón was better replaced by something that truly unites all of us Mexicans? Someone thought that the best would be a monument to chile en nogada, national pride. Then someone asked: and who would be in charge of sculpting it? According to the ultra-identitarian fashion discourse, someone else intervened, the artist could only be another chile en nogada.

The discussion would not stop there: weathered or not weathered? The original Poblano or the one preferred by the majority? A monument to the chile en nogada ideal or to a chili in nogada specific? Undoubtedly, many would protest his clerical origin in a secular society. The Republicans, for their association with Iturbide. Feminists, for the oppression of the nuns. Ecologists, for the acitrón, because the biznaga is in danger of extinction. Vegans and vegetarians, for the cruelty to animals caused by the stuffing. And so…

As funny — or not — as it may seem, the analogy reveals the difficulties of any choice. One way or another, someone will feel dazed and offended. Even with a popular consultation, the winners cannot know if they are on the right side of history, nor can they ensure the future prominence of their speech. Every monument is a demonstration of power; every monument is a monument to exclusion.

Given this panorama, wouldn’t it be better to imagine a public space devoid of them? Wouldn’t the best conclusion to these battles be to leave the seat empty? Something like the capital’s Zócalo where even the zócalo that gave it its name no longer exists? The roundabout of Columbus without Columbus as the most eloquent symbol of the invisibility and absence of those who were excluded by his arrival in what he believed to be the Indies? In a time like ours, isn’t the best monument the non-existent monument, a hollow space that does not seek to impose on anyone, neither our contemporaries nor our descendants, a unique narrative, but rather a void and a doubt about who we are and What have we done with this territory that we call Mexico?