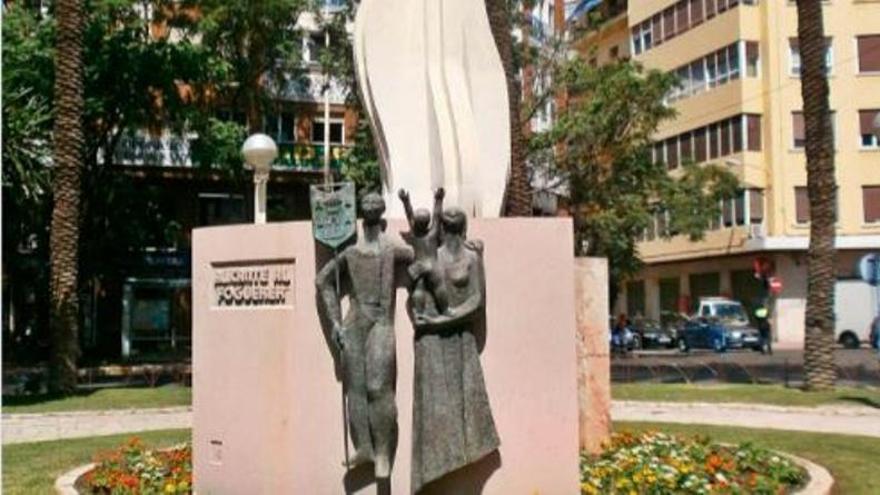 At a key moment in our history, the post-war years, some Spaniards sought to get out of an anachronistic and obsolete experience of art, of a Spain governed by principles in which only survival prevailed, leaving aside the fundamental issues of culture. But those who tried to deviate from the established norm were isolated individuals, not by their own will but by restrictive conditions that killed direct expression or dialogue. However, in the sixties, different circumstances brought the work of two sculptors who with their works dignified the profession in Alicante, Adrián Carrillo, already mentioned in my text from the previous edition, and José Gutiérrez (Alicante, 1924-2002). . I had a more than close relationship with both of them. I met José Gutiérrez at the Orihuela School of Arts and Crafts, where we both taught classes for years as teachers. On the round trips, in the small cabin of the car, shared with students and another teacher, Torres Cotarello, we talked about everything and with intensity, especially about art and politics, making ourselves known intimately.

Pepe, as we called him that, taught wood and stone carving classes in the basement of the School. For many years he was focused on works for churches such as the well-known cover of Mercy, a great high relief where some features of his political affiliation appear within the religious iconography.

Pepe narrated that his learning in the art world began with the experience transmitted by his father, a stonemason by profession, but is based on the work he did for the sculptor Daniel Bañuls, from whom he learned the construction of the human body from the conception of a sober formal abstraction, which characterized all of his work. But despite his sought-after synthesis of forms, Pepe had a certain obsession, on the other hand logical, for Renaissance sculpture that constituted an important reference, forms and imagery that he abstractized with lines that marked the muscles in his arms and legs, with a linear gesture. fruit of an archaic desire. A development that, however, in his early years started from quite realistic relief works, such as those he produced for CASE. Perhaps the work in which he freed himself the most from external conditioning factors, giving his intimate vision as a creator, was in the sculpture tribute to Miguel Hernández, a stone work of great almost abstract expressive force, only vigorous arms, close the figure, but a whole body is there suggested, important.

Pepe recognized the great effort that it took him to impose himself with his work, at a time when his skill in quarrying and modeling caused this skillful vision to be demanded of him fundamentally in works for the churches of Alicante and Elche, or for murals. urban, being one of the best known, perhaps because of its size, theme and location, which we can see in Alfonso el Sabio. A large high relief, from which, curiously, I do not know why, their signature has been removed. Another relief that characterizes our urban center is that of Bailén Street, which frames the facade of a watch shop, although its condition is still very deteriorated. In the latter, limestone work is mixed with interventions in bronze and painting.

There is no doubt that the competition between Carrillo and Gutiérrez was a fact that transcended in Alicante. The two fought to impose a style that was out of the common accepted by the Alicante society of the time. And the two developed their artistic concepts in a fair fight, becoming the sculptors with the most works in Alicante, claiming a different vision.

Gutiérrez’s workshop, on Garbinet street, below his home, was a place worth seeing, as Pepe maintained a certain order within what a sculptor’s workshop means. Many plaster sketches hung on its walls as proof of his enormous work for different institutions and individuals. Sketches that followed very clear guidelines in the way of seeing the human body and the composition of the scenes they represented.

But to define this artist, it is necessary to speak, without a doubt, of his drawing, in which he develops a vision very close to the comic, despite his more classic references. Also talk about his facet as a pictorial muralist, the mural that featured for years of the three poets, Machado, Lorca and Miguel Hernández, on the walls of the old model prison in Alicante was his. His drawing, ingenious in line, also brought an ironic charge due to his sharp temperament. His vision was that of a man who was satisfied with his situation in the world, but full of criticism towards everything that was not under a critical perspective of art and life.

His political side, already in democracy, occupied an important part in his work, especially in the posters and other propaganda manifestations of the CP. He always claimed for himself a position in that framework of the new perception of the parties and their definition before the public. As an anecdote, I will tell you that on the night of F 23, he caught us at the Orihuela Art School, where we could hear the diatribes of the coup generals. On the way back to Alicante they stopped us to ask us where we were going … moments of great anguish as Pepe had the party card in his wallet.

During the years that he was teaching in the sculpture workshop, he was highly appreciated by his students, he had a great ability to establish a sincere connection with people. Even today, he is remembered by many of them as a true master, dominating as few of a knowledge about the techniques of sculpture, both in the carving, as in the manipulation of concrete on a plaster or porespan mold, being able to perform also patinated work of the material.

The years spent in this coexistence with Pepe at school and in his studio, gave me an objective vision on some themes of universal art. Capturing his point of view as a critical reflection, he encouraged me to understand the different perspectives on the same topic.

Pepe won the contest to make the well-known monument to the Foguerer, which can be seen in the Plaza de España, near the bullring, where the artist put all his capacity for expression in which he sought the union between tradition and modernity understood by him. A family of foguerers holds a banner where the coat of arms of Alicante appears while a sculptural shape symbolizes the flame that rises white on a concrete pedestal. Next to the figurative sculpture, a large geometric figure, with basic shapes such as the square and the circle, one enclosed within the other, also seeks that look at abstraction and modernity. A set that assumes all the proposals that he had accepted as valid. A fusion of elements that make up his ideology.

The failed monument to Balmis

I cannot conclude this brief memory without citing a case that was significantly negative for this city. Pepe was granted by the mayor of Ambrosio Luciañez, the first mayor of democracy in Alicante, the realization of a monument to Balmis, for the square that bears his name; it was the figure of a doctor giving a child a vaccine. By the way, I work for which he had the help of his student at the time, the painter Elena Aguilera. This figure was cast in plaster for later casting in bronze. Due to the expansion of the work, for reasons beyond the artist himself, the budget for this intervention exceeded that presented by Pepe. So the artist had to demand this amount from the new City Council that followed the previous one, which did not contemplate this increase. It was important that this project, like others, was a proposal from the previous politician, which is why it was systematically rejected. This reason made the resolution of the sculpture impossible, despite the work done and the expectation created, so Alicante is devoid of a work that would have told us about our history and our important artistic references.

Although, at the moment, he is little known by the citizens of Alicante, José Gutiérrez was an artist who went through an entire era from the Civil War to the end of the 20th century, with his unwavering vision of art that he knew how to transmit to his students and in works that we can contemplate in our streets, we cannot forget the great seated figure located in the city of Elche, a work from his final period that defines him as a sculptor.