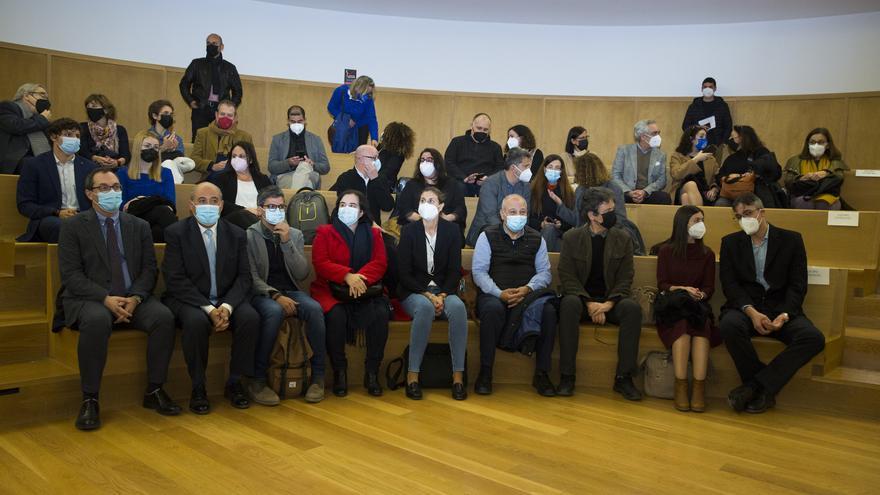 The new dean of the Faculty of Philosophy and Letters, José María Ferri Coll, has taken today possession of the position at an event held in the Multimedia Room of the building of Rectorate of the University of Alicante, chaired by the rector Amparo Navarro, who has also named the dechannel team in full who will accompany the new dean.

The rector congratulated Ferri Coll and recalled that the Faculty of Philosophy and Letters “has held a technologically novel electoral process and that, in addition, it has had one tolta participation, for which we should be proud ”. In the same way, he has addressed the new dean team to state that “The faculties are the university in its purest form, since they support direct contact between staff, teachers and students. This requires very hard and difficult work, so we appreciate the spirit of service with which you will work and we express to you that you have absolutely the support of the management team because we have the common goal of take the University of Alicante to the best place possible”.

For his part, Ferri Coll, who is Professor of the Department of Spanish Philology and General Linguistics and doctor in Hispanic Philology, has indicated that “the dean team is very representative of the faculty, it is very plural and I think we have been able to bring together the right people for the functions they are going to perform ”, to which he added that“ I sincerely believe that the team is more important than the dean. A dean is easily replaceable. A team, no ”.

Among the main objectives that Ferri Coll sets out, the “Institutional accreditation of the faculty as a center, in itself“, But” while this objective is reached, work will be done on the reaccreditation of all degrees and in improving the curricula of each grade ”, he affirmed.

On a personal level, the new dean has stated that “I am a graduate of this faculty, a doctorate from the UA, tenured professor and researcher at the institution, so it is a great honor to direct friends, colleagues and professors with whom I have formed but, also, this very fact supposes a great responsibility because I am aware that the management of a center is not an easy task ”.

“The world needs, now more than ever, the values ​​that are defended and taught in the Faculty of Philosophy and Letters and that is where we have to work the hardest, so that the desire to learn and the desire to teach grows ”, the newly appointed dean concluded.

The rector with the new dean Asunción Espi

Ferri Coll prevailed in a process that included a high voter turnout, with 84% of potential voters, and whose result ended very tight, with 138 votes for the new dean, 115 votes for the candidacy of Llúcia Pascual Martín, 4 blank votes and 2 null votes.