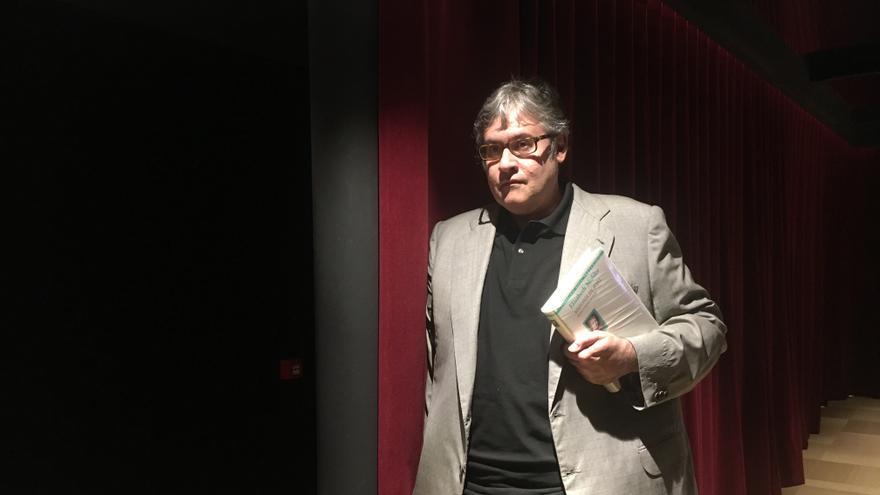 Writer, essayist and novelist Juan Manuel de Prada has published a new volume, ‘An amendment to the whole’. In this case, the Zamorano delves into another of his facets, that of columnist.

How did the book ‘An Amendment to Totality’ come about?

His texts on many occasions provoke the contempt of the right and the left.

I propose an alternative to the ideologies at stake, I propose an alternative from the traditional thought that is the great unknown for the vast majority of people of today who have filled the brain or the place that once occupied the brain has been filled with ideological noise. I think that contemporary man is a platonic cave dweller, who has lost the notion of reality because they have fanaticized him, they have made him a follower of one or another ideology and this has caused him to lose a non-ideological perspective of reality.

You argue that traditional thinking is the only true alternative.

“It is likely that religious faith can help disavow ideologies, but many religious people have fallen into that trap”

What weight does religion have in it?

has weight, but one does not need to believe in order to adhere to traditional thinking. The fact that it has been in the Christian sphere where this thought has been kept alive does not mean that one has to be a Christian to be able to perceive the truth in traditional thought. Traditional thought advocates the recovery of reason, of human nature, which is what ideologies have managed to erase, in such a way that we do not have a clear concept of what human freedom is, of what is good and evil. wrong, among other things. In this sense, It is probable that religious faith can help to disavow the ideologies, but many religious people have fallen into that trap. For a long time, but more so in the last 70 years, the Catholic world has also been heavily contaminated by left and right ideologies. There is a link, but it is not something that is absolutely necessary. Traditional thought posits an order of being in which our lives follow immutable roots, while Promethean politics promises human beings the ability to constantly build their biography. Ideologies, which blind man to the possibility of life after death, try to convince him with delirium that they can bring him paradise on earth.

Also Read  What is Sumo Citrus, the new most pampered fruit in the world that is attracting consumers

Including the extreme right?

Yes, all modern ideologies share a mystical core that is the Promethean vision. Fascism is a modern ideology just like communism. I do not believe that political externals are becoming more and more powerful, but rather that there is currently a hegemonic cultural discourse in which ideologies, beyond their differences, have in common a disastrous and crazed vision of man that has given rise to these latest ideological orgies from feminism, gender ideologies, racism, environmentalism and so on. I think that what happens in the parties of the extreme right, which are very different from each other and have nothing to do with each other, is that they question this discourse and, in a way, what they provoke in many people who they are fed up is a reaction of adherence as a consequence of the boredom of the political game, which is a game that is increasingly tedious for people. That, together with the right-wing voter’s awareness that the Popular Party has betrayed their ideals, if they ever had it, makes them vote for a right-wing political party in the old way. Nevertheless, I do not think that VOX go far beyond what Alianza Popular proposed in the 1980s and no one thought that it was a fascist party.

So why are we tearing our clothes now?

Because democracy has progressive features and those who remain quiet can be perceived as moderate right, but in 20 years you will see it as extreme right, simply because of the inevitable drift of the right.

The postulate that you defend lacks space in the current panorama.

There is no party that fits nor do I believe that partitocracy is the area in which traditional thinking can make sense. The excessive power of the political parties with which he plays is with the praise of the voter. The raison d’être of modern politics, as it is conceived, is to flatter the lower instincts of voters with absolute short-termism. No ruler today governs with the idea that in 20 or 30 years things will be better, but with the idea of ​​benefiting during the next four years.

Also Read  What's next for Europe after the Ryder Cup beating at the hands of young Americans? | Ryder Cup

little by little inevitably political parties that defend sectarian interests are eroding the common good and there comes a time when sectarian interests no longer find common ground, which is inevitable. It is a work that advances, advances and advances. You simply have to look at the degree of ideological bitterness that exists today and the one that existed 30 years ago. It is evident that three decades ago there were many more possibilities of understanding in Spanish society. Today that society is much more polarized, but in 30 years it will be much more so.

What does he attribute it to?

The partitocracy needs the weakening of the natural ties of the peoples to become strong. The politician to become strong has to destroy the social consensus, the conformity of a people in a series of fundamental questions makes the people strong and weakens the parties and in order for the political parties to achieve a strong functioning of their structures, they need in exchange to disintegrate the links supportive of the people.

The weakness of these ties influences the rise in suicides, a topic to which he dedicates an article where he points out that it is a philosophical problem.

Every person who feels like dying is because life has become unbearable for him and the amount of pain he has in his life does not pay him.. I think it’s an unavoidable consequence of not believing in the afterlife. When you believe in the afterlife, the amount of suffering you have in this life seems very small compared to the eternal reward you are going to have. The moment you blind this eternal reward, the amount of pain in earthly life becomes unbearable. The increase in suicide is closely linked to the loss of religious support. Furthermore, the isolation of the soul, which is the great phenomenon of our time, has much to do with the loss of spirituality. One breaks one’s ties with the supernatural, but also with natural life forms. We live in an increasingly individualistic world and this means that there are no such social brakes that detected that a person was beginning to deteriorate psychologically. Today, loneliness is growing, family breakups are increasing, uprooting is growing, and all this deepens that pain..

Also Read  Macron, the difficult balance between the candidate and the president | International

The Foessa Foundation report is devastating. The coronavirus has dragged 2.5 million people into poverty, eleven million live in a situation of exclusion and the number of households with serious problems of coexistence due to lack of employment and low income has doubled.

It tells us about a society where the national productive fabric is being destroyed. In the West we suffer from rulers who are favoring large international corporations and that are destroying the national productive fabric. They are people who want to destroy livestock, who have managed to close tens and tens of thousands of small businesses. They are people who are bringing poverty and the subjugation of the national economy to transnational plutocratic interests. On the other hand, the fabric of social assistance that seeks human ties is also being dynamited. There are more and more broken couples, miserable salaries that prevent starting a family… all this makes society more fragile. Before you stopped working and there was a very large cushion between the moment you stopped receiving a salary and you were in poverty, now it no longer exists.

Will the situation improve?

Immediately it is very difficult. In the medium or long term, the situation will change because exhaustion will occur. Many people, despite being fanaticized and sheepish, will gradually lose the blindfold and realize that the political party stuff is a big lie. You will realize that Pedro Sánchez serves the same interests as Mariano Rajoy or that Biden serves the same interests as Trump. What happens is that I think the transformation, I hope I’m wrong, will be painful.

I am referring to strong crises and even very strong social upheavals because the system is not going to give up what it has achieved.