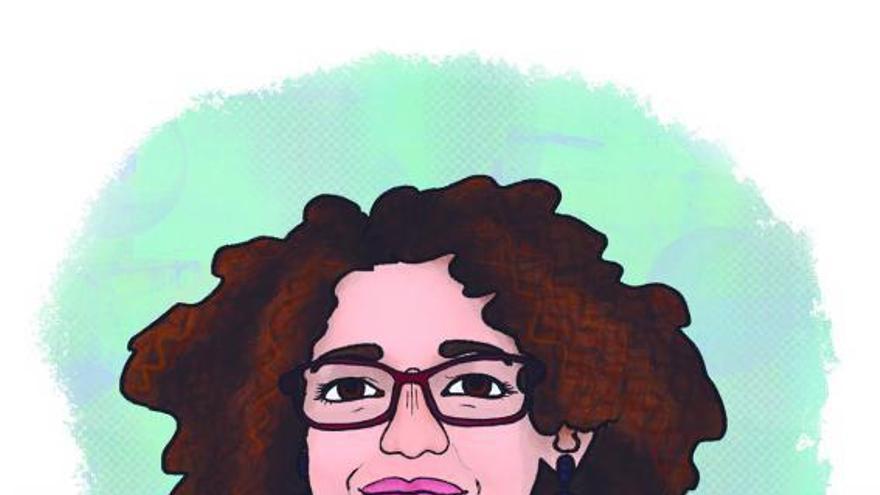 It was the father, a convinced feminist, who made an effort to convince Juana not to follow in his footsteps in Law, considering that the society of the time would resist entering through the door of a law firm run by a woman. Thus, during one of the conversations about her future, the suggestion came to study Philosophy and Letters, an option that the eighteen-year-old accepted with pleasure.

To cover this stage, Juana left Albacete and entered the University of Valencia, coinciding with a thriving group of professors, including Carlos París, Manolo Garrido and José Luis Pinillo, referents of the time.

In college, during that dark period lacking in freedom, it didn’t take long to show his vindictive spirit. It was in the second year of his career when, together with a score of university students, he locked himself in the classroom for a whole night in protest against the dictatorship.

That initiative leads some students to go to jail, while women find the punishment in withdrawing their scholarships. This setback forces him to look for a job that would pay for the expenses covered by the scholarship, in an attempt to keep his parents from knowing what happened. So, from that day on and for a year, he has to combine his studies with endless ironing sessions in the English hotel, in front of the faculty, while looking for spaces to give private classes in Latin and Greek in order to to be able to pay the Colegio Mayor.

At that time, during a party with mutual friends, he met Ricard Cabedo, a brilliant student who completed law with an extraordinary academic record, who ended up opening the doors of the prosecution at only 23 years old. The courtship soon led to a wedding and, after a short stay in Madrid where the young prosecutor had to complete an internship, the couple chose Alicante as their destination.

Once the motherhood stage with three children in tow is covered, Serna gets a place and turns to teaching at the recently inaugurated Babel Institute, directed by Beatriz Inés, under whose leadership a group of teachers known as the Betty Girl’s emerges, a A team of young and powerful teachers with cutting-edge teaching techniques, political affinity and a high dose of energy made up of Emilia Gómez, Ana Amelia Rodríguez, Teresa Canet, Florita Rodríguez, Ana Anta, Lola Moyá, Mercedes Fernández, Prudencia Cantalapiedra and Juana herself.

During that period, with the shadow of the Franco regime still present, the already prosecutor Cabedo received some notice from members of the Police, dressing up with alleged subversive maneuvers some accusations that today cause perplexity, among them a warning that was reflected in the police file, coloring in red to the Cabedo-Serna couple for “having friends who defend free love.”

The unusual complaint was an anecdote and Juana continued her business. First as an intern, then as an attaché and finally as a professor, she was linked to Figueras Pacheco for three decades, making direct contact with politics at the beginning of that period.

The link began with the clandestine meetings of Set i mig, a legendary bookstore near the Plaza de Correos, a liberal center that fed the Alicante intelligentsia of the seventies. Under the protection of its owners, Celia Ibáñez and Ricard, Set i mig sheltered countless characters who left their mark on politics and local culture, with meetings and gatherings that generated bonds of friendship.

It was in Set i mig where Serna decided to join the PSOE, a party that would mark his career in parallel with teaching. The insistence of Antonio García Miralles, Emilio Soler and Pepe Beviá ends up convincing Juana, who enters flour from the hand of the then Minister of Public Administrations, Luis Berenguer Fuster, to assume the general direction of the Valencian Institute of that department. This management, developed in Valencia, stands out among other things for the signing of the first agreement with the European Institute of Public Administrations.

The electoral defeat in 95 returns Serna to the classrooms, where she remains until returning to the political field in 2000 after being elected as a deputy in Congress. In the San Jerónimo race, she connects with two companions who soon become inseparable friends: Carmen Alborch and Rosa Conde. At the same time, he undertook an intense activity that led him to preside over the Spanish delegation in the assembly of the Western European Union (2004-2006), to the vice-presidency of the Education Commission (2008-2009); to the spokesperson for Science and Innovation (2009-2011) and to participate from the front line in the presentations of the Organic Law of Education together with Carmen Chacón; in the reform of the National Hydrological Plan in communion with Cristina Narbona, and in the Law of Science, Technology and Innovation under the direction of Cristina Garmendia.

For this last task, he acts as spokesman and main speaker, with the idea of ​​carrying out the law unanimously. By way of discretion, which begins with a pact between Garmendia and Soraya Sáenz de Santamaría, Juana makes her way with the popular leader Gabriel Elorriaga, followed by Inma Riera (CiU), José Ramón Beloki and Josu Erokoreka (PNV), Francesc Canet and Joan Tardá (ERC), in addition to the Canarian Ana Oramas and the Galicians Uxue Barros, Xesús Jorquera.

The law goes ahead with a broad consensus (of 292 deputies present, 289 voted in favor), clearly expressing the will to put R & D & I at the center of the political agenda with a regulation that is still in force today.

At the end of the stage in Madrid, he takes a break from retirement until he receives the call from Ximo Puig in 2017 to preside over the PSPV, a position he is delighted to assume by maintaining a special bond with the militancy and great admiration for Puig, whom he always valued.

And there is still Juana Serna, a good politician, feminist activist and inexhaustible left-hand teacher who fought for education and science based on dialogue to achieve a defined objective: to modernize Spain.