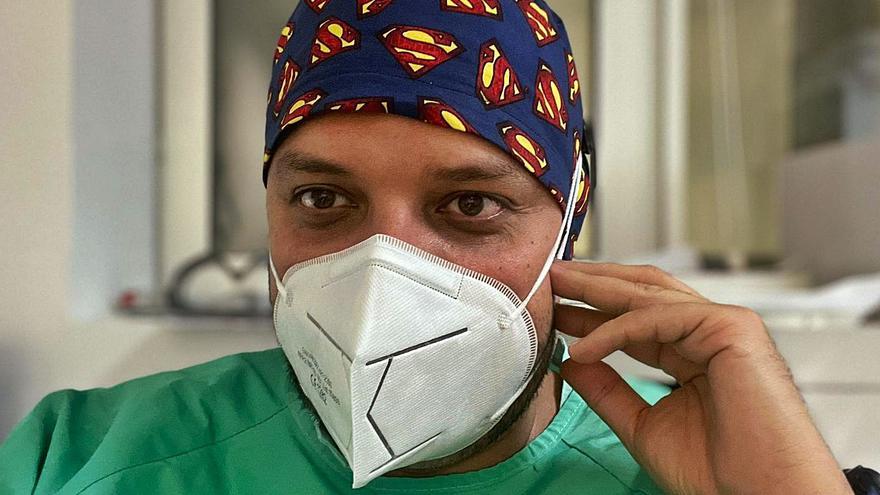 This pandemic has been physically and mentally exhausting, especially for health workers. How are you?

We have been enduring the pressure of a pandemic and its immediate and late consequences for more than a year. Doubling shifts, enduring marathon days and with stress in unsuspected limits. We have always stood up, with little, despite exposing our own health and we still do not see the end of so much suffering. Right now we are tired, discouraged and a little fed up with so much pain from ourselves and from others. We have the desire and the vocation intact, but the spirit in the red.

How is your day to day being an emergency doctor at the moment after the decrease in income?

Until two weeks ago, 12-hour shifts became veritable trenches, receiving serious patients every 30 minutes, sometimes several at a time, juggling respirators and rooms where they could be isolated, seeing entire families infected and in serious situations . We would get to work and after a long coffee we knew that we would not stop for a long time, sometimes we had to cry a little, others ask for a little comfort from a colleague, and others shout silently, get over it and move on. Today we are in a tense calm, seeing how we again make the same mistakes of relaxing the measures, the inconsistencies of political decisions and the lack of communication with the population. We also witness the irresponsibility and apathy of a few, which can compromise the lives of many.

What is the profile of the person admitted to the emergency room today? The latest data point to an increase in income for young people.

By vaccinating the age group of older patients, improving protection measures and their care, the incidence curve shifts to younger ages. In the previous wave we already saw a substantial drop in the age of admissions, as well as an increase in severity and admissions to intensive care units. The first patients we are receiving in this rebound are quantitatively younger, unvaccinated and with a more rapidly progressive severity profile.

Is a fourth wave worse than the last one awaiting us?

I believe that we have already experienced the worst rebound, and there are several reasons that outline a more optimistic environment: vaccination of the most vulnerable groups, the elderly and front-line personnel, natural immunity from recent previous contagion, perimeter closure measures with greater controls and a little more social conscience and individual responsibility. The death toll is the worst news of this pandemic, we must put a face on it and give them a voice; so much sadness cannot be hidden behind a cold number.

The AstraZeneca vaccine is currently in the spotlight, do you think its media coverage has been successful?

Vaccination strategies need more transparency and much more scientific dissemination, so that the population knows more and can choose from knowledge and not from the sensationalism of the exceptional. The data on thrombotic events and other adverse effects that make headlines every day are not of a higher incidence in the vaccinated population than in the general population. We are facing an effective vaccine with safety levels within the standards established by the European Medicines Agency (EMA). All serious events associated with vaccination are studied, monitored, and if they pose a greater risk to the population, measures are taken. The only possible decision with the studies we have in progress is to vaccinate, vaccinate and vaccinate. Vaccines save lives, we must not forget it.

The stories of loss, sadness and loneliness put a face to this virus, which does not discriminate. What is the most shocking case that you have lived?

I have lived through very difficult situations during the last year, both in the hospital and at SAMU, but the last one I have experienced has been the saddest and the one that has marked me the most. One afternoon in January, almost at the end of the shift, the bell in the Vitals Room rang and we ran. It was about a middle-aged woman who was transferred in a situation of respiratory failure after several days with covid in home isolation. When asked, once stabilized, by her relatives she told us that her husband and son were in the ICU. For more than two weeks an entire family traded their home for three ICU beds, an ominous prognosis and the pain they suffered in the silence of prolonged sedation, a bleak silence. I wish I could tell you that when I take off my gown, I also shake off the pain and suffering, that when I leave the hospital I forget what I have experienced, but it is humanly impossible to be oblivious to so much sadness.

What message would you send to those who are exhausted, distrustful of the vaccine and do not see the end of the tunnel?

We have to take better care of ourselves, we must take consistent action, move the political debate away from the pandemic and focus on science. We should build safer spaces, vaccinate more and allocate economic resources to the most vulnerable. If we continue to be late we will not assume waves, but tsunamis. Our lives are all about this, ours, that of our children and each day that passes from irresponsibility and lack of empathy is a safe passport to suffering. It is time to knock on the table and say: enough is enough. A single death from covid should already be a cause for mourning. The pain of thousands of families who have lost their loved ones should open social gatherings and all the years of life lost should make us reconsider, take better care of ourselves and help others.