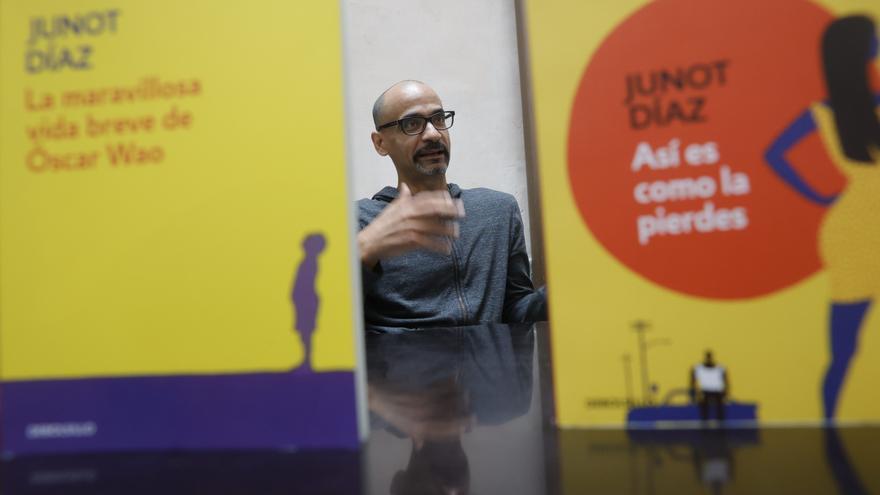 The Massachusetts Institute of Technology (MIT) Professor of Creative Writing Junot Diaz (Santo Domingo, Dominican Republic, 1968) receives the journalists who cover the Celsius 232 Festival of fantastic literature, science fiction and terror in Avilés first thing in the morning sitting in one of the rooms of the hotel where he is staying these days . There is a coffee to go on the table.

– To start somewhere: let’s talk about the dictator Trujillo as a literary character.

– I know that in Spain they understand it well. Surviving a dictatorship changes a country completely and changes it, many times, in a superinvisible way. We Dominicans have spent more than fifty years without Trujillo and it still has a huge impact on our lives, but it is an invisible impact. The only thing I can do as a writer in this regard is to try to open a space where the community can confront an issue like this because the power of a dead dictator is much more effective in silence, especially when he is dealing with a community where he does not there is a lot of reading. In my community there is not much reading, that’s why I always look for super, super strong characters and traumas because I have to break that prejudice that people have against reading.

–Another issue of your Oscar Wao is the evasion of dark life through science fiction.

–I understood the obsession that Oscar has first at this level that he talks about: science fiction is a way to survive. He comes from a middle-class family, he goes to a private school, he does not have the challenges that I had as a child, he is well posed. His problem is that he is very, very fat; He’s very, very “nerdy.” It is a “stay”, as we say. All those books, all science fiction, help you feel normal. Okay, that’s why I represented it as I represented it. But then I realized that science fiction can also be a method that helps you understand the world. As an immigrant, as the son of one of the victims of the dictatorship who lives in New Jersey, but has a mother who was tortured. I mean, there is no space in which he and his mother can understand each other, but science fiction and fantasy touch on many of the same topics. Science fiction helps Óscar understand all those ugly, strong stories that happened to his relatives.

– I have read that it takes a long time trying to write a novel of science fiction, but that it does not leave to him.

“I’m a slow writer.” Sometimes I think that writing career is against my nature. I do not know why, right now I am writing a science fiction novel: I have already reached page 500, I have about six more months to go and I hope I keep it. Books, writing, I always find it difficult.

– Have you ever told that your Oscar Wao was born in Mexico.

-Yes. In that year I was going crazy in the United States: I couldn’t write. A friend of mine, the writer Francisco Goldman, invited me to Mexico. He said: “Look, the apartment next door is empty, rent it, stay here writing.” I did it. I fell in love with Mexico and in that year I began to think about my years at the University, when I had a roommate who was Puerto Rican, “supernerd”, he had a lot of problems with girls, so many that he got depressed, ufff, fiercely. So I was super different: super athletic, he was “nerd”. We lived those couple of years, I am not going to say in conflict, but with those differences. That was the seed that helped me give birth to Óscar Wao.

–There are clear references to Flaubert, Salinger …

– I am a writer because of the readings I have done in my life, not because I needed a career. I am a writer because I want to continue talking with all those books that have formed me. There is no doubt that Flaubert, that Dickens, that writers like these who are mentioned in the novel, have affected me a lot and I am still grappling with it. Look, the athletic man has “coaches” and the writer has his beloved books. They are my “coaches”, without them I cannot run.

–You are a professor of creative writing in a temple of scientific knowledge such as MIT. How do you handle it?

– Look, I love my students very much. Most of them love art: you don’t make it to MIT if you don’t. The truth is, however, that the course I teach does not matter to them at all, but I love that challenge. If in the end I have convinced one or two of them of the importance of literary art, I am satisfied. I always win the challenge.