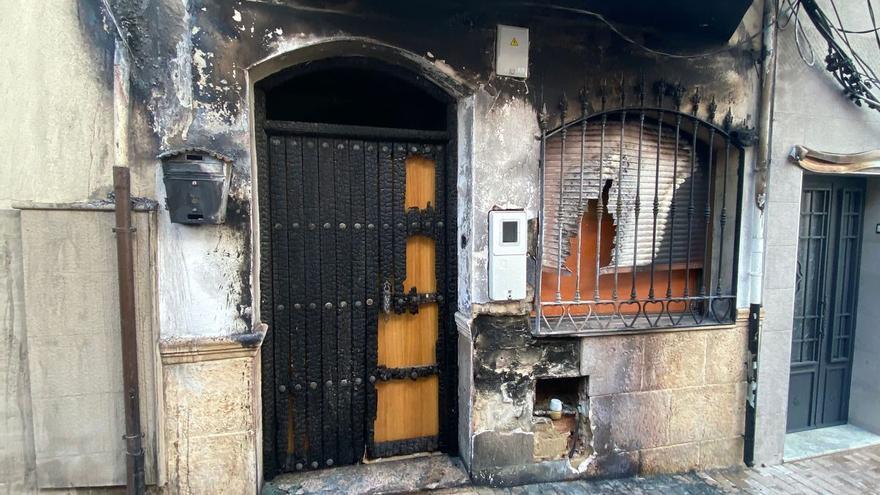 It happened at 4 in the morning, when there was no one on the streets of Navas de San Juan, a town of 4,500 inhabitants of the Jaén province. A couple slept at 36 Calle Nueva. The woman, 8 months pregnant, began to smell like smoke. Her husband woke up with a nudge. The man leaned out of the window and saw what was happening. The facade of the house next door, where the mayor lives, it was burning. Also a Nissan Pathfinder parked in the same door and a container that someone had embedded between the property and the vehicle.

The ‘Street fight’ it seemed history in Spain after the end of the terrorist gang ETA. But the ghost reappeared last weekend, in a territory so unlikely to this type of event such as the province of Jaén. Mayor, the socialist Joaquín Requena, suffered a full-blown attack. It was not a random fire. It was a premeditated attack. A group of hooded people (there are four very young men) perpetrated it.

The news is that it is not news. Or rather, that it is not the first time that the mayor has come under direct attack against his person. On September 26, 2020, just over a year ago, the first socialist mayor suffered a couple of coordinated attacks. While some individuals broke the windows of his car, others painted the facade of the city ​​Hall insulting him (‘maricón’ and ‘pintamonas’) and defining him as “the authentic virus of the people”. However, it is the first time that they have directly attacked him.

“I still have the scare in my body,” he tells El Periódico de España an elderly woman who lives on the street where the events took place. “I was asleep and noise in the street woke me up. I looked at the clock, I saw that it was 4 o’clock and I was very surprised. I woke up my husband, he leaned out the window and we saw the mayor’s house burning”.

Like her, practically all the residents of the street. “This is a small town, we all know each other and we all know where the mayor lives,” says another neighbor, underlining that “nothing ever happens in this town … until it has happened.” He wants to illustrate that there are no apparent political problems. There is no open war between two factions Nothing like that. A quiet town.

However, they want to make life impossible for Joaquín Requena. The socialist rules the people by second consecutive term. And judging by the opinions of the neighbors, their work is being well valued by their countrymen. “He is doing a lot for the people. It is ‘beautifying’ it quite a bit. It is the second time that he has won the elections, it will be for a reason ”, points out another of his fellow citizens.

The mailbox of the house was completely burned after the attack. DAVID LÓPEZ FRÍAS

Has Requena, however, declared and anonymous enemies. It is not yet known who made the threatening graffiti or who broke the windows of his car. Almost probably the same people who tried to set fire to his house in the early hours of Saturday to Sunday, while he was sleeping inside.

Neighbors believe that the attack is the work of someone who knows Requena and his surroundings: “The mayor is married and has a son who studies in another city. His wife was not at home because she had come to visit the boy. The mayor was alone, sleeping. That’s what they were after him. They were going to kill him, because this is no longer painted or a stone on the car “, sums up the neighbor of one of the houses closest to the destruction.

They are also suspicious of “a group of very young boys, of about 20 years maximum, who were hooded ”, point out sources close to the Jaen Consistory. “The Civil Guard is investigating and they will have to do their job. But if they are who we suspect, there are no parties behind or political wars. They are thugs who have taken it with the mayor and now it has gotten out of hand ”.

The fire started at 4 in the morning in a garbage container, as in any ‘borroka’ fire habitual. The authors, at night, placed the ‘container’ on the narrow sidewalk of Calle Nueva. An SUV owned by another neighbor had parked in front of the door, which has also been burned. Between the house and the car there was just enough space to fit the container. Once placed, they set fire to it and escaped, without any eyewitnesses to identify them.

The attack caused damage to the vehicles of the neighbors. DAVID LÓPEZ FRÍAS

The container caught fire soon, the fire spread to the car. It burned sheet metal and diesel fuel tank, leaving a trail of fuel on the ground that immediately spread the fire to the other vehicles. The neighbors, realizing what happened, came down en masse. “One removed cars, another alerted family members in case they had not noticed, another came down with a fire extinguisher to turn it off …”.

Precisely, the one who tried to douse the flames with the extinguisher was about to cause a greater misfortune, since it sprayed the electrical cables on the facade and they began to explode. “They looked like fireworks,” summarizes today one of the victims, whose car has also been damaged.

Jump on the terrace

The mayor had to leave his home at the back of the building. He jumped across the terrace to the next house. His neighbor at number 36 acted in the same way, who did not have time to remove his car from the row of parked vehicles. At least three cars have been damaged in the attack.

The mayor has been contacted by El Periódico de España without getting a response. The City Council, on the other hand, has confirmed that on Tuesday, November 16, a rally will be held at the door of the mayor’s home, to protest the attack. The investigation, meanwhile, is continuing. There are no security cameras in the area, but the Civil Guard has tightened the siege and in the next few hours there could be arrests related to this strange case of ‘Street fight’ in this small town of Jaén.