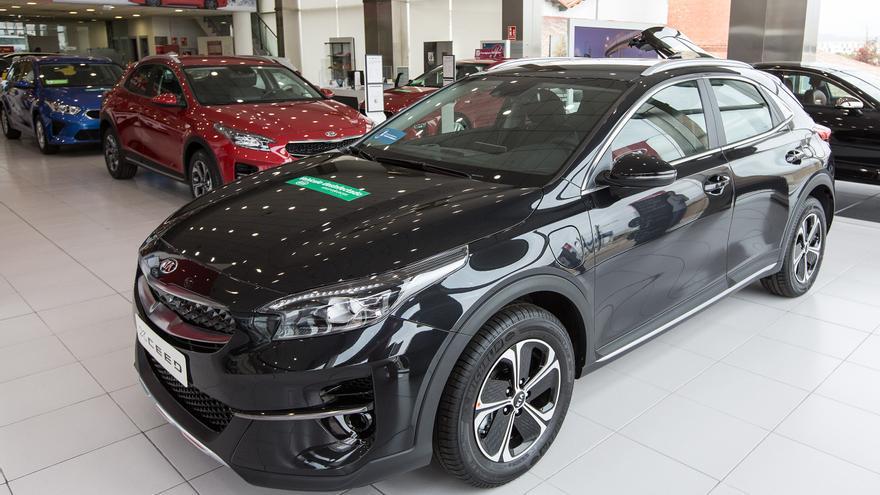 The new Kia XCeed in its Plug-in Hybrid version has been the last variant of the urban crossover to reach the market. Its diesel and gasoline versions arrived in Spain a few months ago and are being a real success. This model incorporates electrified technology into the Ceed family for the first time and it marks a clear step forward in Kia’s electrification strategy.

It’s about a very important model for Kia and quite a declaration of intentions, since it combines the strengths of an SUV, such as the crossover aesthetics and functionality with dynamic driving and proportions of a car. It is also one of the most technologically advanced models in its category.

Motor lovers who are looking for a change of car to bet on sustainability are in luck because Marcos Group, official Kia dealer in Alicante, launches an attractive offer with which you can buy the Kia Xceed 1.6 PHEV eDRIVE 141CV (h enbrido enchufable) for .5 26,500.

Registration fees are included in the price Alex Dominguez

It should be noted that registration fees are included in the price. On the other hand, if you pay cash the price of the Kia Xceed plug-in hybrid is 30.500€.

Advantages and qualities of the Kia XCeed Plug-in Hybrid

The arrival of this plug-in hybrid version is a further demonstration of the important commitment that KIA is making for electrification. Your ability to emit few emissions and his Fully electric propulsion is an alternative that perfectly complements conventional gasoline and diesel engines.

Mechanically, the new Kia XCeed Plug-in Hybrid combines an 8.9 kWh lithium polymer battery, a 44.5 kW electric motor and an efficient 1.6-liter “Kappa” four-cylinder GDi engine (direct gasoline injection), jointly providing 141 hp of power and 265 Nm of torque. This allows the XCeed PHEV to be able to accelerate from 0 to 100 km / h in 11 seconds.

The propulsion system is linked to a six-speed gearbox with double clutch (6DCT), which ensures a more enjoyable drive than other hybrid vehicles equipped with electronic continuously variable transmissions (e-CVT).

Technology regenerative braking allows the new plug-in hybrid version to harness kinetic energy and recharge its batteries in braking and holding, further improving the overall efficiency of the system.

Finally, through these plug-in hybrid variants some high levels of efficiency (CO2 emissions from 29 g / km) and therefore a range in all-electric mode of up to 30 miles (WLTP cycle), allowing drivers to complete most of the daily trips and short trips only with electric power.

The vehicle has the new sound system Virtual Engine Sound System Kia, a alert hearing that is activated in electrical mode only at slow speeds or reverse. The system generates virtual sound levels of up to 59 dBA for notify pedestrians of the presence of the vehicle.

The Kia XCeed Plug-in Hybrid has implemented in the front suspension the hydraulic stops of the gasoline and diesel versions. The elastic stop is submerged in the hydraulic fluid within the shock absorbers, which provides adequate cushioning on uneven surfaces.

It has been designed to absorb even large movements suspension with a smooth and progressive response, preventing the body from bouncing after rapid compression. It also contributes to more responsive steering and better overall body control, while reducing suspension noise over potholes.

This new variant is provided with own design elements that differentiate them from the rest of the gasoline and diesel variants.

These elements are mainly a new redesigned closed grille that improves aerodynamic efficiency, as well as a charging socket integrated in the vehicle’s left front wing that allows the vehicle to be connected to the charger.

The XCeed Plug-in Hybrid is equipped as standard with 16 inch alloy wheelsWith a new specific design, 18-inch wheels are optionally available for the taller versions.

Also, for this electrified variant of the XCeed the exterior color palette is expanded with the introduction of a new orange hue -Orange Fusion- which brings the colors available for the plug-in to 11.

As for trim levels, in Spain the letter “e” has been included before the commercial name of the finish, highlighting that it is a electrified version and giving it its own identity. For this reason, the new hybrid variants will be available in three trim levels (eDrive, eTech y eMotion).

At interior, the sporty interior design maintains the same dashboard facing the driver, the low seating position and the ergonomics of the current Ceed range. However, the new plug-in hybrid versions offer a number of new functionalities that allow owners make the most of the new powertrain.

The vehicle has a Charge indicator, located in the upper part of the dashboard that allows to know what is the current state of the battery charge.

The instrumentation panel also provides information specific to the plug-in hybrid system, such as the remaining charge level, the autonomy estimate in electric mode or the energy flow between the battery / heat engine and the electric.

Specifically for plug-in hybrid versions, these systems incorporate new features that help owners to locate available charging points, either in the vicinity or along the route entered in the navigator. Displays can also show relevant information related to the powertrain, such as the level of charge remaining in the battery or graphs of energy use.

In addition, owners can use the touch screen to schedule when your vehicle should charge when plugged in at home, allowing you to take advantage of cheaper energy rates outside of peak hours. Both systems information maintenance include standard Apple CarPlay y Android Auto, while the optional 10.25-inch (26 cm) touchscreen navigation system allows you to connect via Bluetooth two mobile devices simultaneously.

The system heating, ventilation and air conditioning “Driver Only”, which is activated by a new button on the dashboard, instantly interrupts the flow of air to all the ventilation ducts in the cabin, except those closest to the driver. This reduces energy consumption caused by the ventilation system and, at the same time, it keeps the driver at his preferred temperature.

Unlike conventional ventilation systems, Kia’s “Driver Only” system does not simply restrict airflow to certain vents and redirect it to another location. turn off fans to reduce power consumption.

The Ceed range was designed from the ground up to accommodate new hybrid powertrains. This means that the adoption of a plug-in hybrid powertrain has had minimal impact on its interior dimensions. Its structure was conceived from the beginning to house the battery.

This battery, the 8.9 kWh, is located next to 37 liter fuel tank and under the rear seat, unlike many other plug-in hybrid vehicles where the battery takes up valuable cargo space.

The luggage capacity The Kia XCeed Plug-in Hybrid is 291 l and increases to 1,243 l with the seat folded down. Under the boot of each vehicle there is a specific space to store the charging cable when it is not being used.

Remember that the offer launched by Grupo Marcos for the new Kia XCeed Plug-in Hybrid consists of limited units. Check the details of this offer.

Follow KIA Grupo Marcos in Social networks to find out all their promotions: