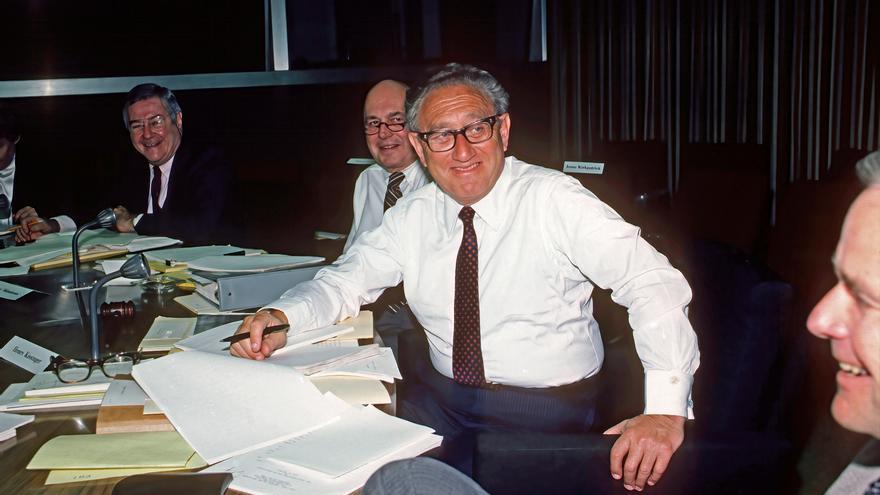 The first year of Juan Carlos I as King and his management of the start of the transition in Spain left the then US Secretary of State pleasantly surprised, Henry Kissinger, who nevertheless warned him of the need for a strong central government to avoid falling into anarchy and of the importance of his political neutrality.

This was the message that he sent to the young monarch through his personal friend and emissary Manuel Prado and Colón de Carvajal, with whom Kissinger met in Mexico City on December 2, 1976, according to the memorandum of said meeting that the State Department has now made public and to which Europa Press has had access.

“I’m really impressed with him and I wasn’t at first,” Kissinger admits to his interlocutor, stressing that “he has managed it very, very well.” “I think he was probably lucky not to get too involved in things at first,” he adds.

“You have done an excellent job”, insists the Secretary of State, emphasizing that the King has known “to manipulate the sources of power within Spain very well.” His performance “very credible in a very difficult circumstance” has made “Spain stronger today”, assesses Kissinger.

However, he trusts that the new monarch has in mind “the lesson of history”. “Spain without a highly developed central authority would become anarchic”, warns the King’s emissary, stressing that “Spain has always been strong only when the king was strong.”

“The Spanish monarchy never survived when it was weak. Spain has only been strong when the Spanish monarchy was strong,” insists at another point in the conversation Kissinger, who maintains that It is not “an insult” nor is it “condescending”.

For his part, Prado, as happened with the two meetings he had with Kissinger in Washington at the beginning of November 1975 before Franco’s death, transfer to the Secretary of State the plans that Don Juan Carlos has in mind.

“He wants me to know that everything is under control and that the programs and reforms that they discussed when they met are underway, “Prado tells him, referring to the meeting held during Juan Carlos I’s trip to Washington in June 1976, in which he met with the president, Gerald Ford.

The priority at that time was the referendum scheduled for December 15 on the Bill for Political Reform, which would kick off the Transition itself and which ended with the support of 97.36 percent of the Spanish. Once the law is approved, Prado explains, “the government will be stronger.”

“We still have some opposition, but they are not very well organized,” stresses, informing Kissinger that the PSOE congress had been authorized on December 15 – it would be the first on Spanish soil.

As for the communists, the emissary transferred Kissinger from the King that “it will never give permission for communists to openly join the political process. ” In this sense, he emphasizes that the main problem is the Army, since it is feared that it could rebel if the PCE is legalized.

Prado expressly mentions the leader of the PCE, Santiago Carrillo, who comments that he had visited Madrid a week before, “illegally as always”, and that in his opinion he is wanting to “go too fast”.

“We do not want to declare the Communist Party yet official,” Prado insists, stressing that they want to avoid “creating problems” because the priority is the referendum and then the elections to be held “in April or May.” However, and despite these statements, the PCE was legalized in April 1977.

Regarding this issue, Kissinger initially maintains that “the United States Government he cannot advise the King of Spain how he should manage the internal affairs of the country “, underlining the importance of “weighing the pros and cons to see where the balance is.”

The legal situation of the PCE, points out later, “it’s a Spanish decision”. However, Kissinger clearly expresses his rejection of legalization, considering that it is not necessary. If I were the King, I would not. You show your strength by not doing it. You will have a spectrum of opposition and a completely normal political opinion without it. The left may scream, but it will scream anyway, “he emphasizes.

THE RIGHT IS ALSO A PROBLEM

On the other hand, Prado recognizes that the right, and more specifically the Popular Alliance led by Manuel Fraga, “is another problem”. Regarding the former Francoist minister, Prado considers that “he is an opportunist.”

Thus the things, it exposes that what the King wants is that a “center opposition” is formed. “To have stability we have to build some type of nucleus that is not seen as completely sponsored by the government,” adds Prado.

“The King has something like 30 percent for Fraga, 30 percent for the other parties, plus 40 percent divided between the parties of which the Government can obtain a majority “, specifies the friend of the monarch.

These forecasts of Don Juan Carlos were not at all correct. Thus, in the elections, which finally took place on June 15, 1977, the Popular Alliance won 8.31 percent of the votes while the PCE won 9.33 percent. The PSOE was the second most voted force, with 29.32 percent.

The elections were won by Adolfo Suárez’s UCD, whom Don Juan Carlos had appointed as Prime Minister on July 5, 1976. Kissinger is particularly interested in knowing if Suárez will be relieved once the elections are held. “No, we don’t want to lose your contribution to the government,” Prado replies.

Suarez “have been loyal and smart. He is not really very well informed about the economy but he has relatively good economic and financial advisers, “adds the emissary of Don Juan Carlos, opening the door to” some changes “within a year or year and a half after the elections. .

As for the position in which the King will remain, Prado conveys to Kissinger that he believes that Don Juan Carlos would like “to withdraw from actively directing political affairs” in two or three years if a stable government can be established.

“Once the machinery is up and running, it is probably better not to be seen running things on a day-to-day basis,” adds his close friend, something the secretary of state seems to agree with. “It would be smart for him not to get involved in party politics. He must maintain a position of neutrality sufficient so that the left cannot attack him, “defends the American.

Finally, Prado takes advantage of the meeting to ask Kissinger to transfer to the new Jimmy Carter Administration, who would take over from Ford in January 1977, the King’s desire to continue maintaining a “special channel of communication” like the one with the secretary of state.