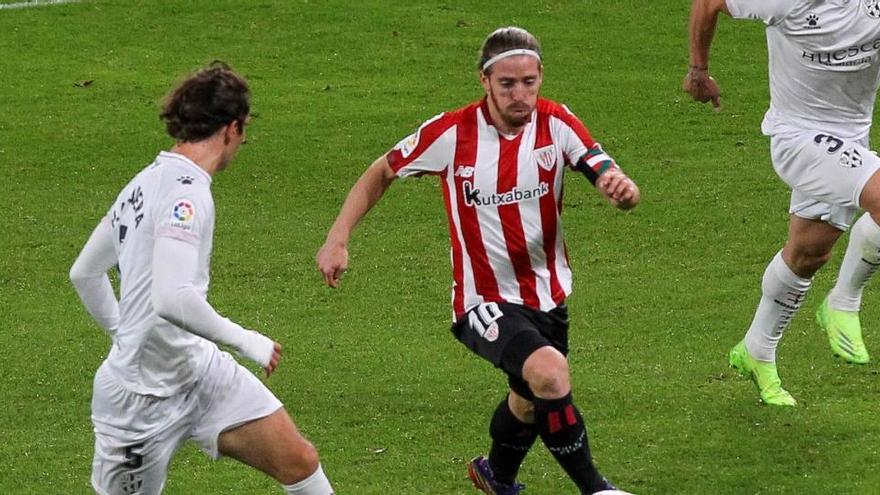 Kenan Kodro, transforming a penalty that they did to himself, and Unai Nuñez, both in the final part of the crash, gave life to their coach Gaizka Garitano, which did not predict a good future with the 0-0 that was on the scoreboard in the 85th minute of a bad game against Huesca in San Mamés.

The penalty that the Bosnian international scored, after a demolition of Jorge Pulido that led to the expulsion of the central Toledo, was not only a savior for his team and his coach, but also unexpected in a match that he deserved from start to finish to finish without goals. It was not like that and Athletic closed a four game winless streak and rises, with 17 points, to ninth place in the table. The concessions at the end condemn Huesca to continue in decline.

The first part was absolute nothingness. Neither game, occasions, nor rhythm, nor intention, nor anything. A tiresome wandering of both teams, which penalized Athletic especially, more demanded by its bad streak of only two points out of 12 possible and with a really complicated upcoming calendar.

But Gaizka Garitano’s men seemed to be very sorry for Tuesday’s beating in Valdebebas, in which he played practically the entire game with one less. Especially Yuri Berchiche, who once again remembered his exhaustion episodes in two games after suffering COVID-19 in which he had to be relieved after the break.

For Michel’s men, after winning their first game of the season on the last day, the point was a reinforcement even in their tight classification in relegation places. Not much higher was Athletic, which I was in danger of falling into compromised areas from the table. In that situation it was hard to believe the rojiblanca attitude, with no recourse to exploit beyond giving the ball to a not particularly brilliant Muniain to connect with Williams’ runs. That did not happen.

Moreover, the danger was greater, who tried to delve into Unai Simón’s doubts with distant shots from Ontiveros and rest centers. In addition to in two falls in which he requested a penalty from Yuri to Ferreiro and from Capa to Javi Galán almost in the same place. The danger of Athletic, almost non-existent, was limited to a couple of centers from Yuri, in one of which Borja García touched Dani García to prevent his frank shot, and another from Williams, which was not reached by the unassisted Villalibre.

Athletic improved after the break, in which Dani García stayed in the locker room. Not so much as to scare Huesca, but to besiege him and chain a series of centers that put the Alto Aragonese team in trouble. The most dangerous, from Berenguer. The first, a direct corner on goal; the second was combed by Williams but Villalibre was well covered by the rival defense.

Huesca responded, although timidly, without the faith that Borja García needed a shot and with which Ontiveros did in a distant one seeking to catch Unai Simón clueless. That did not happen. It seemed a clear and undeserved 0-0 for both teams, when the key play came. A clear penalty from Pulido to Kodro that the Bosnian international, without Raúl García, Muniain and Williams on the field, transformed with authority. Everything was taken for granted, but Athletic still scored the same. Unai Nuñez’s header from the small area, without marking, to a corner thrown by Morcillo.

Referee: Valentín Pizarro Gomez (Madrid Committee). He sent off Pulido in the 86th minute, for the demolition of Kodro in the decisive penalty, and showed a card to Pulido himself (36) and his teammate Doumbia (m.66).

Incidents: Match of the fourteenth day, played in San Mamés behind closed doors.