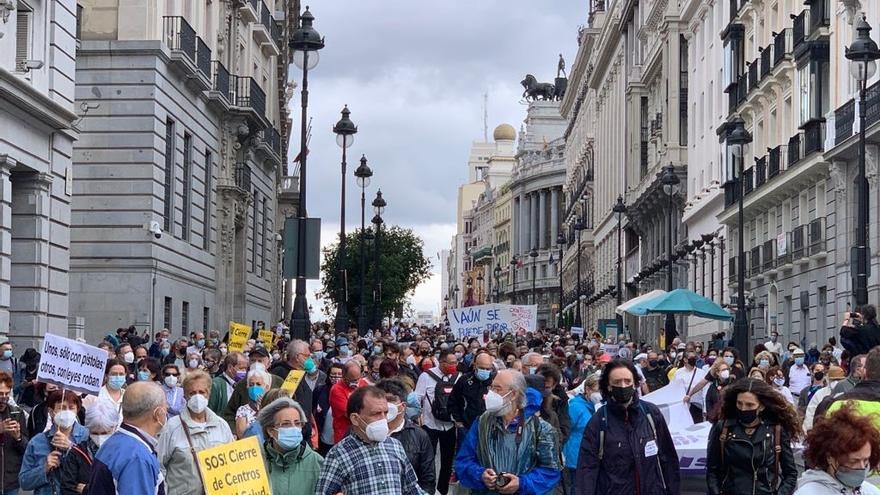 The demonstration organized by the White tide of health workers has denounced this Sunday in the center of Madrid the closure of 41 of the 49 health centers in the downtown area of ​​the capital and have also demanded a greater investment in the Primary Care.

In this line, the delegate of the MATS union from the Hospital 12 de Octubre in Madrid, Luis López Álvarez, has stated that they seek “that 25% of the budget of the Community of Madrid is directed to Primary” and also a reinforcement in the workforce , for what they say would require “650 Primary Care physicians, 150 pediatricians, 2000 nurses and 600 other workers “.

Álvarez has also communicated that they have a manifesto signed by more than 275 groups between platforms, unions, parties and neighborhood associations to try to stop the closure of these primary care centers before the arrival of the summer season. “Many centers will close in the afternoons, which will make it difficult to work conciliation,” said the delegate.

‘You don’t play with sanity’

The White Tide has brought together thousands of people who, despite the rains, have left the Plaza de Callao at 12 noon this Sunday, on a tour of the Gran Via and until the Sun Gate, in which the participants have chanted slogans such as ‘health is not a game’ or ‘primary care is also necessary’.

The privatization of health care has also been denounced in the Madrid’s community with slogans such as ‘nothing for the private sector’ and many of the banners have expressed their discomfort with the recently invested president of the Community of Madrid, Isabel Díaz Ayuso, whom they accuse of generating this situation and of perpetuating “wear and tear” in health after 25 years of PP government in the region.

Entities such as the Madrid Health Center Platform, the Union Movement Assembly of Sanitary Technicians (MATS), the assembly union of the workers of the Sum 112 or various groups of residences for the elderly and neighborhood associations.

For this event, a large National Police and Municipal Police unit has been organized that have controlled traffic on Gran Vía and have accompanied the protesters at all times. On the other hand, since the organization of the event, attendees have been asked to keep safe distances to prevent infections.

This call was attended by political representatives of Más Madrid such as Íñigo Errejón, Mónica García or Rita Maestre, of the PSOE as Pepu Hernández or José Manuel Franco and from Podemos as Carolina Alonso.

The spokesperson for Más Madrid in the Assembly, Monica Garcia, Also an anesthetist on October 12, he has expressed his disagreement with the government of the region, which he calls “ruin” and “unscrupulous” for having taken advantage, he assures, of the pandemic to dismantle public health and points to the counselor Javier Fernández- Lasquetty as the main responsible. “He had a pending account for 2012 and now he is paying it off,” Garcia stressed.

Along with Mónica, the spokesperson for Más Madrid at the City Council, Rita Maestre, and the leader of Más País, Íñigo Errejón, who stressed that public health has taken care “in difficult times and should be protecting as the best treasure. ” He has also indicated that “It cannot be that with the excuse of summer health centers are closed.”

Along these lines, Errejón has denounced that Ayuso “is interested in a kind of war of permanent attrition with the national government” and has expressed concern about this choice to “lead as a troupe that marks his ideas, to the extreme right of Vox” .

For his part, the PSOE spokesman in the City Council of the capital, Pepu Hernández, has highlighted the “inequality” in the region and he has asked that public services be shielded since “they are the only ones that can balance this situation.”

Likewise, Hernández has indicated that the Government of Isabel Díaz Ayuso is based on “constantly confronting the Government of the Nation” while it is dedicated to betting “on better health and better use of public services.” Accompanying the spokesperson was the former government delegate in Madrid and current president of the Higher Sports Council, José Manuel Franco.

From Podemos, they assure that “Madrid’s public health is at a minimum” and that after Ayuso’s inauguration speech, the situation, predictably, “is not going to improve.” That is why they have defended that 25% of the region’s budget be allocated to primary care and that the 41 public health centers not be closed.

Among other claims, the spokesperson for Podemos in the Madrid Assembly, Carolina Alonso, has assured that currently if “you ask for an appointment today and they do not grant it to you for three weeks and the safest thing is that they will attend you by phone.”