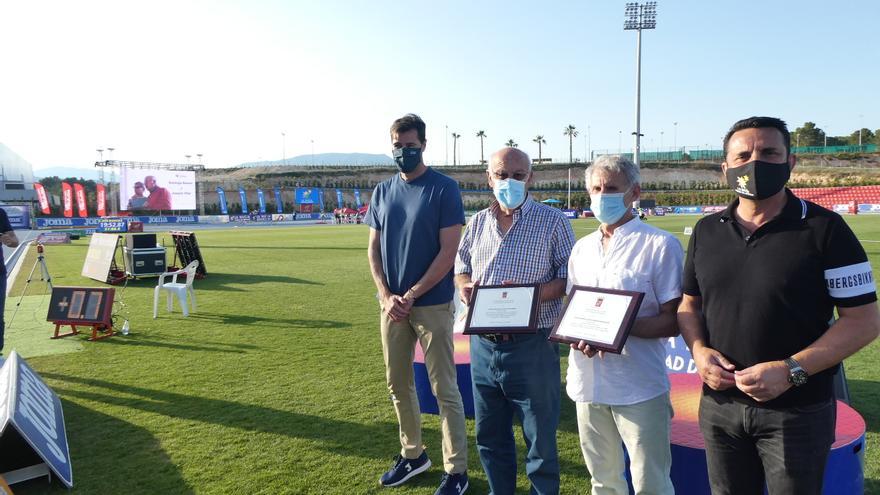 Coach Joaquin Vilar, The athlete Domingo Ramón Menargues and the athlete-coach Rafael Blanquer received an honorary plaque from the City of La Nucía for their great contribution to athletics, throughout their lives and received great applause from all the athletes who participated in the sporting event. Taking advantage of the celebration of the Spanish Athletics Club Championship in La Nucía, a tribute was paid to three legends and forerunners of this sport, in the province of Alicante and in the Valencian Community.

Raúl Chapado, president of the Royal Spanish Athletics Federation and Bernabé Cano, Mayor of La Nucía, presented these plaques on the podium of the Spanish Athletics Club Championship 2021, during the competition, at the Estadi Olímpic Camio Cano de La Nucía. An emotional act since during the delivery of the plaques, images of the athletes and coaches honored were shown on the stadium screens, moving the three recognized people. Neither Joaquín Villar, nor Domingo Ramón, nor Rafa Blanquer knew that they were going to receive an honorary plaque, in front of the best athletes and clubs in current Spanish athletics. Without a doubt a tribute in the best possible scenario for them, people dedicated to athletics during their lives, 100%.

On Saturday, June 12, in the afternoon, a tribute was paid to coach Joaquín Villar, founder of the Benacantil Athletics Club and a trainer specialized in long-distance races, especially in the 3,000-meter hurdles. Athlete, coach, promoter and promoter of athletics in the province of Alicante and a national benchmark, in fact he became a coach of the Royal Spanish Athletics Federation. Villar was moved to receive the plaque from Bernabé Cano, mayor of La Nucía, with the presence of Raúl Chapado, president of the RFEA, with the Olympic Stadium full of athletes who stopped their training and warm-ups to dedicate a standing ovation.

Along with Joaquín Villar, the athlete Domingo Ramón Menargues received his recognition. The crevillentino long-distance runner got two olympic diplomas in the 3,000-meter hurdles, being fourth in the 80th Moscow Games and sixth in Los Angeles 84. Domingo Ramón was one of Villar’s main students, with whom he merged in a heartfelt hug, after receiving his plaque, from the hands of the first mayor.

On the podium of the Estadi Olímpic Camilo Cano de La Nucía on Sunday, June 13, in the afternoon, Rafael Blanquer received his honorary plaque, the first athlete to exceed 8 meters in the long jump in Spain and promoter and coach of the Valencia Athletics Club. Precisely when his club received the tribute, the Valencia Athletics Club was competing to win the Division of Honor of the Nacional de Clubes in La Nucía. Blanquer was a European bronze in 1970 in length and has been the coach of various world length figures such as Yago Lamela, Niurka Montalvo and Concha Montaner. Despite his 75 years they are still in the gap, at the foot of the sand pit and trains the Spanish athlete of longitude Fátima Diamé.

Playas Castellón revalidated the title of champion of Spain of Athletics Clubs in the men’s category but could not revalidate the women’s, which was won by FC Barcelona for the first time in an excellent performance, with the Spanish record of Laura Redondo in hammer throwing and Yulimar Rojas’s long jump record for Venezuela (6.88 meters), although he made a best jump of 7.27 meters that he did not count as a record due to excessive air in favor (+2.7).

The competitions were held without public, to guarantee the protection of the health of all the people present in the facilities. They also had strict health and preventive measures against COVID-19. But the club championship was broadcast live on the Sports TV League.

32 clubs and 1071 athletes participated in this National Honor Division and First Division clubs. This sporting event was organized by the Royal Spanish Athletics Federation (RFEA) with the collaboration of the Trinidad Alfonso Foundation, Alicante-Costa Blanca Provincial Council and La Nucía City Council. The trophy ceremony was attended by Raúl Chapado, president of the RFEA, Sergio Villalba, Councilor for Sports and Bernabé Cano, Mayor of La Nucía.

In his statements Bernabé Cano, mayor of La Nucía, highlighted that with Laura Redondo’s record there are already three national records achieved at the Camilo Cano de La Nucía Olympic Stadium, in just 2 years of life. “I would highlight from these Clubs Nationals that we have had a Spanish record in hammer throwing by Laura Redondo. Remember that in 2019 Javier Cienfuegos also achieved the Spanish record for Martillo at the Nationals in La Nucía. Therefore this track seems talisman to make records, we already have two from Spain in Martillo, in addition to the recent record of the hour that the marathoner Dani Mateo achieved last April. This is one more incentive for athletes to keep coming to La Nucía to train and compete ” concluded Bernabé Cano, mayor of La Nucía

“It has been a club party and an athletics party, these Club Championship 2021. First of all, I want to thank the City Council of La Nucía for offering us these fantastic facilities. There have been very close and very exciting competitions. We have also seen a record in Spain set, which indicates the great level of competition. Finally, I want to emphasize that there is one thing that defines La Nucía above the facilities and the climate and it is the warmth, it is the facilities and how they are involved in the competitions. We perceive all this from the Spanish Federation but also others at an international level ” commented Raúl Chapado, RFEA president.

The Fútbol Club Barcelona achieved the first Spanish Championship of Athletics Clubs in the Honor Division in its history. Laura Redondo (Spain’s hammer record 70.66) and Yulimar Rojas (Venezuela’s record in Length) led a historic title for FC Barcelona in the Iberdrola League. The Blaugrana club led the classification from the first round and did not let go of it at any time, winning by 140 points, eleven ahead of the 2nd Valencia Athletics Club (129 points) and the third defending title, Playas de Castellón (119 points ). The Blaugrana performance was rounded off by the relay quartets, as both the 4×100 and the 4×400 set new championship records. The MVA award went to Yulimar Rojas thanks to the value that the 7.27 in length has given him.

Yesterday, Sunday morning, the final for the title in the First Division was played at the Estadi Olímpic de La Nucía, where the two places of promotion to the Division of Honor were put into play, which finally corresponded to 1st Athletics Alcorcón (113 points) and the 2nd Tenerife CajaCanarias (104.5 points), the latter in an exciting and tight fight in the last part of the competition with the third, which was Juventud Atlético Elche (98 points). The MVA corresponded to hurdler Claudia Villalante thanks to her 13.79.

Castellón beaches: twelfth in a row

The Playas de Castellón Athletics Club revalidated the champion title in La Nucía in the final of La Liga Joma for men’s clubs, last Saturday. The Castellón club, with this title, has now added twelve in a row and placed third in the historical record after 15 for FC Barcelona and 14 for AAMoratalaz (Larios AAM) after an afternoon of great emotions where until the arrival of the relays, both the already champions, the Levantines and FC Barcelona, ​​the first position were alternated, which finally opted for Playas de Castellón with 140 points, for 128 for FC Barcelona and 128.5 for Real Sociedad, completing the podium in 2021. The MVA trophy went to the jumper Jean Marie Okutu thanks to its 8.01 meters, in length.

On Saturday morning, also at the Camilo Cano Olympic Stadium, the first Division final was played for the title that at the end of the competition decided the first two promotion places to Honor Division where the 1st CAPEX (109.5 points) and 2nd UCAM-Cartagena (101 points) will be new teams in the top category next year. The MVA trophy in this match went to the long jumper Iker Arotzena (7.87).