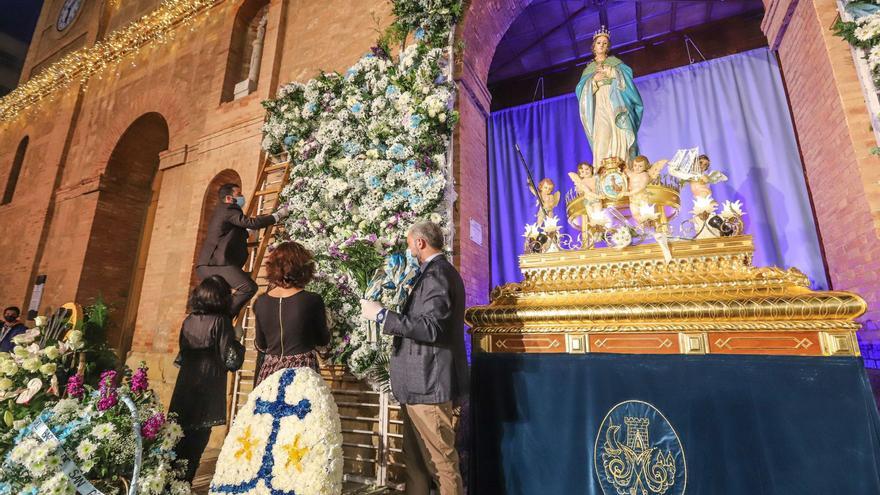 “Purísima Concepción!” exclaimed some, with that expression that Torrevieja use to refer to something extraordinary, astonishing and even miraculous, when the patron saint appeared with the bells flying at the door of her archpriest temple, two years after her last processional departure. “Never before has so much time gone by without going out to the streets in the almost 80 years that the current stature of the Virgin of the city has,” said Antonio Aniorte, president of the Sons of the Immaculate, the association that is in charge of his cult and that headed the traditional floral offering.

Seventy associations offer bouquets of flowers to La Purísima at the gates of the archpriest temple of the patron saint of the town. | TONY SEVILLA

Thus, counting the days, with honor and a sincere gesture of tribute, seventy associations arrived with baskets and flower arrangements at the church, after touring the streets Caballero de Rodas and Moriones from the vicinity of the temple of the Sacred Heart of Jesus. They did it accompanied by the chords of seven music bands from the area and covered by the devotion of its people, as diverse as the municipality.

Less groups than other years. Also less numerous and very careful with the rules for parading: in lines of four people maximum and keeping social distance. “Everything in a reduced format” was the forecast of the party councilor, Concha Sala, although finally there was an overwhelming response.

The festival brings together different nationalities that are present in the municipality. | TONY SEVILLA

They were the same desire as always. The desire was even more fervent after the outbreak of the pandemic, which last year silenced the streets and overshadowed the most significant festivals in the city. That town that, being a village, worshiped the Immaculate in a small hermitage, adorning the Plaza de la Constitución and Calle Concepción with arches of branches and foliage since the beginning of the 20th century.

The little ones enjoy a tradition that is passed down from generation to generation. | TONY SEVILLA

Some popular celebrations in honor of La Purísima that in 2020, although testimonial, were reinvented in virtual format and are now being deployed with security and prevention measures. After a trail of losses and a time of sadness and confinement, yesterday was a special day to deliver the offering of flowers to the patron saint’s feet, out of that need for joy and to return to normality. To recover the bustle of the kids and the firecrackers, to soak up the smell of gunpowder and fill your eyes with colors.

Between masks, with gloves and hydroalcoholic gel in the exchange of bouquets of flowers, the day concluded with the solemn song of the Salve Marinera, by the Orfeón de Torrevieja and the band of the Unión Musical Torrevejense. With the last chords of the hymn the Virgin re-entered the Church of the Immaculate, waiting for 729 days later, next Wednesday, there will be no more restrictions that prevent her from going out to the street again with the splendor of the procession , that so many emotions awakens among the costaleros and those who accompany lighting. A fireworks display in front of the casino will put the finishing touch to some parties that have tried to control a virus with which we will still have to live for a while.