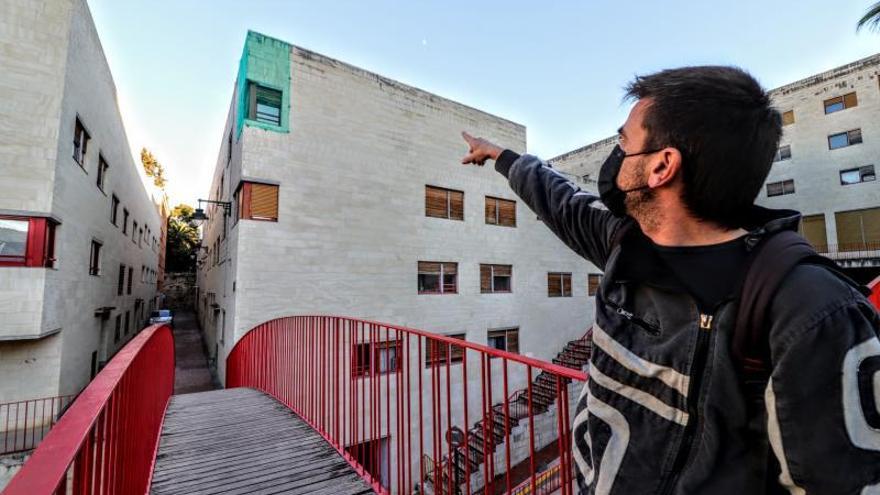 Twenty years of oblivion. The La Sang de Alcoy neighborhood has had deficiencies since its construction. The residents have had to face numerous repairs, both inside and outside the houses, but the constant detachment of the facades has forced them to demand definitive solutions from the different public administrations, since for them a complete rehabilitation of the coating is an economically unaffordable performance.

To understand the problem, it is possible to go back to the end of the 80s, when the Alcoy City Council, together with the Generalitat, launched an intervention project in the old part of the city through the ARA Plan. Among the interventions carried out, the one in the La Sang neighborhood stands out, where the then Valencian Housing Institute (IVVSA) built 143 social housing and commercial premises.

The project, which was awarded the FAD Prize for Architecture and Interior Design, was launched in 1991 and the keys were delivered to the neighbors in 2000. It was from then on that the owners began to detect the numerous deficiencies that presented both internally and structurally.

The stone blocks support each other, as can be seen in the image JUANI RUZ

The most important problem, according to Diego Fernández, president of the neighborhood neighborhood association, is the detachment of the stones from the façade, pieces of “more than 10 kilos and 6 centimeters thick that fall onto the public highway.”

The issue “is prosecuted, because there are neighbors who denounced, even some stairs, but 20 years later they are still awaiting a sentence,” Fernández details, who also assures that “at all times we were told that they were going to help us, until shortly before after 10 years of age, when this type of deficiency can no longer be claimed, they decided to screw up the most dangerous areas ».

The owners have a report from an architect who warns that “the fall of a single piece can kill a person and, worse still, can cause the loss of confinement and the massive fall of an entire section of facade cladding”.

This means that “we have a problem because we are the owners, but the City Council also has it because there are sections that are public roads,” explains Yolanda Chanfrut, a member of the board of directors of the neighborhood entity.

Chanfrut also highlights that the neighborhood is in a busy area with a college and university just a few meters away. For this reason, and given that they are special regime homes for which «we had to have a minimum and maximum income and very specific requirements, they ask the City Council to help them find a definitive solution.

The landslides on the facades have occurred from day one and have forced a flight of stairs to be cut. Juani Ruz

«How can it be that certain characteristics are required to enter to live here and then they want us to undertake a rehabilitation of this magnitude? It is assumed that these houses were for working families, the repair of the facade could plunge into serious economic problems to many neighbors “, insists Yolanda Chanfrut.

And the solution would be to remove all the stones and place another type of coating, since, according to the aforementioned report by an architect, “there are areas (mainly capitalized) where it has been found that there is no brick factory behind the cladding, so the screw would not be anchored to anything, it would only go through the plate ”, a fact that, according to the same document, has been found in some of the points repaired with this technique.

Neighbors also regret that from the City Council “there is no will” to find a solution, and that so far “only fines come every time a stone falls.” In the same way, they recall that some premises are owned by the Generalitat, an administration that, through the former IVVSA, built the houses and that, far from assuming the damage, “came to denounce the winning company, but the judge did not tell them. admitted “, conclude the neighbors.