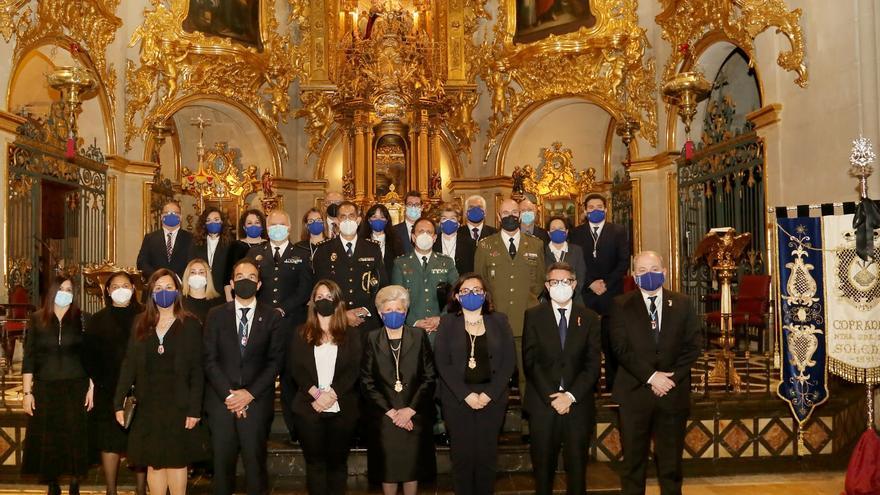 The Basilica of Santa María welcomed with great expectation on the afternoon of Good Friday the Solemn Act of Worship that the brotherhood brothers of the Royal and Very Illustrious Brotherhood of Our Lady of Solitude organized in honor of the ancient and venerated image that historically closes the Official procession accompanied by all the ecclesiastical, civil and military authorities of the city.

Many people from Alicante have been able to visit during the holy days the altar of worship that the corporation with canonical headquarters in Santa María has erected to celebrate this atypical Holy Week private of processions and penance stations due to Covid-19. At the foot of the chapel, artistically decorated with their own ornaments and objects of worship, the faithful and visitors have been able to write their requests and prayers in a guest book that has become the testimony of the fervor and admiration for this sacred image in the local popular devotional.

La Soledad de Santa María on its altar of worship

La Soledad de Santa María on its altar of worship

The title image of this emblematic corporation, which in 2019 celebrated the bicentennial of its founding restitution with an extensive program of commemorative events, has been moved from the niche where it remains throughout the year to the central part of the chapel, so that it can receive public veneration of the faithful. In addition to the corporate banner that wore a black crepe as a sign of mourning, flanking the altar was the flag of the Board of Ladies and the banner with the city’s coat of arms, as the Alicante City Council was its “Patron of Honor”.

“This year the brother brothers have placed a black crepe on our banner in tribute to all the victims who have lost their lives as a result of the ravages of the Covid-19 pandemic. Our memory and prayer for all the deceased, today and forever ”, declared the elder sister president, Balbina Oncina.

For such a special occasion, the image of Our Lady of Solitude has once again worn the artistic procession mantle recognized as “the mantle of Alicante and its Holy Week” or also called the mantle of the shields of the brotherhoods and brotherhoods. The date chosen for its replacement has coincided with the celebration of the Solemn Act of Worship and Veneration held on the afternoon of April 2 in the Alicante basilica.

The artistic garment is a jewel of the textile heritage belonging to the treasure kept by the brothers in the Casa Cofrade “Soledad de Santa María”, recently blessed and inaugurated by Bishop Jesús Murgui. The oldest Sorrowful image in the Parish of Santa María wore the mantle without interruption from the eighties until 1999, when the brotherhood commissioned in Lorca the imposing gala mantle that currently bears the Marian invocation in the Official Procession.

The restoration work has been carried out entirely by courtesy of the waitress María de la Concepción Torregrosa, who has spared no means or efforts to carry out this campaign. “The actions undertaken have guaranteed the material conservation and symbolic values ​​of this sumptuous textile sample that stands out for displaying the Alicante coat of arms in the center of its composition.”

The three-and-a-half meter long piece of art is embroidered in gold thread on black velvet, and has gemstone applications in the floral motifs and in the embroidered butterflies that surround the central composition represented by the city’s coat of arms. On the front and bordering the workmanship, the embroidered emblems of the 16 brotherhoods and brotherhoods that made up the Semana Mayor at that time stand out.

Large attendance of authorities and the Custodial Knights

In substitution of the Official Procession, the main act of the religious corporation, which puts the finishing touch on Good Friday, brought together all the brother brothers, as well as civil and military authorities. The attendance of the main authorities and representatives of Alicante society was well attended. It was attended by prominent leaders of the General Courts, the Valencian Courts, the deputy mayor of the City Council, members of the Municipal Corporation, representatives of the Armed Forces, the command of the Defense Sub-delegation, the Lieutenant Colonel Chief of Operations of the Command of the Civil Guard, the Chief Commissioner of the National Police Corps, the Chief Commissioner of the Local Police Corps, members of the Parish Council and Cáritas de Santa María, representatives of Brotherhoods and Brotherhoods and numerous faithful and visitors from other towns of the Valencian Community.

“As with the procession, the brotherhood has organized a formal ceremony that has stood out for the order and fervor of the attendees who with their presence have wrapped up the Queen and Lady of Santa María on the night of mourning for Our Lord ”Said the older sister.

During the solemn ceremony, the image of Our Lady of Solitude has received custody of the Alicante Local Police, dressed in uniform and with the entity’s corporate medal. Since ancient times, the members of the City Council’s Grand Gala Escort have been its Custodial Knights and officially accompany them during the Good Friday procession that is presided over, following the traditional custom, by the Bishop of the Diocese of Orihuela-Alicante as the highest religious authority. , accompanied by all civil and military authorities.

The central act has been led by the public reading of the letter that the diocesan prelate, Jesús Murgui, has addressed to the confreres and faithful of Santa María in which he wished them a Holy Week of recollection and Christian commitment. The rector of the basilica, Manuel Martínez, who is a chaplain of the brotherhood, has presided over the holy offices. Just as their predecessors did in the pastoral ministry, the rector and parish priest, who, originally in 1819, was the ecclesiastical president of this entity and of the Official Procession, has concluded the solemn act that has closed the cycle of the Passion celebrated on Good Friday in the Basilica of Santa María in Alicante.