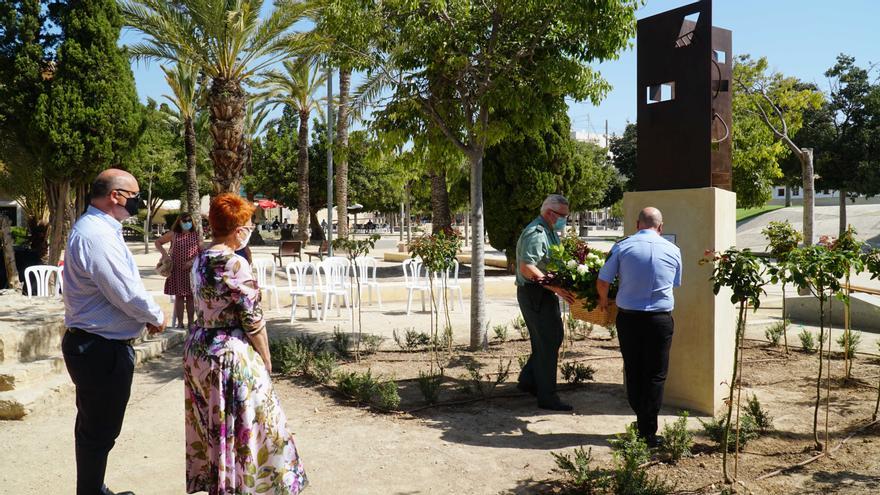 The mayor of Vila Joiosa, Andreu Verdú, and the director of the Department of Public Health of the Marina Baixa, Rosa Louis, have inaugurated this Saturday a monument in tribute to solidarity during the covid-19 pandemic in the Barbera park dels Aragonés. The meeting, as reported by municipal sources, has been attended by representatives of all the groups of the corporation and different groups that have been in the front line throughout the pandemic, such as health workers, Local Police, Civil Guard, Firefighters of the Baixa Marina, Protection Civil, Red Cross, DYA and Cáritas, along with members of associations and local entities that have collaborated in different ways during this pandemic.

In the act, a minute of silence was observed in memory of the victims who died during the pandemic, at the same time that a string duet performed a musical piece. Likewise, the Local Police, representing the citizens, has deposited a flower arrangement next to the monolith. The monument is divided into two parts. A more public face, formed by two figures that evoke a balcony and a sanitary cross, unequivocal symbols of the first wave, when ignorance of the virus was general and it seemed to us that it would be a transitory state towards the old normality. The other side is more intimate and, hidden behind the facades, talks about personal processes and how each one has lived the pandemic internally, with aspects such as the absences of relatives and acquaintances, confinements, the home, teleworking , masks, fear and neighborhood solidarity.

The director of the Department of Health of the Marina Baixa stressed that “solidarity has saved many lives” and “is essential to resolve the current health crisis”, as well as “a great help for our health work.” He also pointed out that “the fate of many in this pandemic depends on the behavior of each one” and that “getting vaccinated is the most supportive gesture that we can do right now.”

For his part, the mayor of La Vila has stressed that “we have a health system that is the envy of the whole world”, both because of “the high level of professionalism of all its staff” and because “it has demonstrated a solidarity worthy of our sincere appreciation and gratitude ”. Verdú has also referred to the Security Forces and Bodies that were “at the foot of the canyon” in the most difficult moments, and to the citizens of Vilera “for a behavior that has been exemplary, supportive, responsible and fraternal”, since there were many the people who “from their private homes offered their services, collaborating with society to overcome the most difficult moments”, a work of solidarity that “will be reflected in this sculpture for the memory of all”.