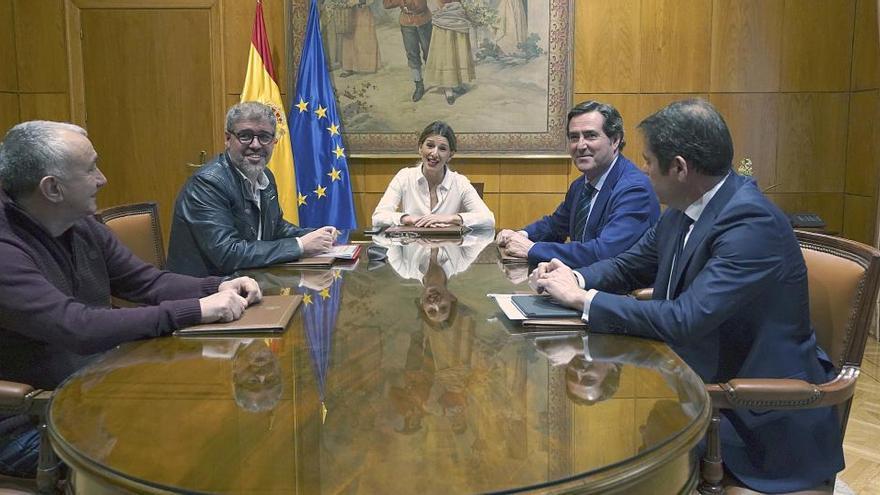 The Ministry of Labor, the Unions and employers will meet again this Monday to try to reach a percentage of increase in the minimum interprofessional wage (SMI) for 2021, a meeting in which both the union organizations and the Executive hope that the employer will change its position regarding freezing this income, or even lower it.

In the first meeting held last week to address the matter, the Secretary of State for Employment and Social Economy, Joaquín Pérez Rey, confirmed that the government was not going to freeze the minimum wage next year.

In the meeting this Monday, Work aims to know what are the specific positions of all parties and study them, since, as the Secretary of State said, “the Government is not going to condition the debate on any specific figure, beyond understanding that the freeze is not timely.”

Also last week, the Minister of Labor and Social Economy, Yolanda Díaz, asked the employer to have “empathy with his people” and “high sights” to negotiate the rise.

He also reminded employers that while workers under a temporary employment regulation file (ERTE) have their salaries reduced by 30%, they, in many cases, are being exonerated from all their social contributions “.”Empathy, a certain proximity to his people and high-mindedness“he insisted.

In connection with it, Díaz described as “discursive and ideological” the argument of the president of the CEOE, Antonio Garamendi, rejecting the rise in the SMI due to the current economic crisis and the downturn experienced by many companies.

“It’s exactly the same thing I was saying last year and then the economy was growing. It is a discursive and ideological element for the CEOE, but I am sure that Mr. Garamendi does not agree that we have poor workers and we have them above 13%, “she said.

The head of the Ministry highlighted that all European countries are going to raise the minimum wage and that if Spain did not raise the SMI, in addition to being “an anomaly” with respect to the rest of Europe, “the workers who need it most would be left out.” “It is now when it is most needed,” he added.

Díaz also acknowledged that there are discrepancies within the Government regarding the increase in the minimum interprofessional wage (SMI) for 2021, but stressed that the decision finally adopted by the Executive will be “collective.”

“As in all subjects, there are different opinions and that is goodIt is not that we are univocal (…) Then the Government will decide and we will do it collectively, “he said.

In fact, last Friday the First Vice President of the Government and Minister of the Presidency, Relations with the Courts and Democratic Memory, Carmen Calvo, assured that she would not raise the interprofessional minimum wage (SMI) now because it has already increased by 29% in the last two years and there must be a balance between protecting workers and the economy and their companies in a crisis.

Other voices of the Government, such as the economic vice president, Nadia Calviño, or the Minister of Finance and spokesperson for the Executive, María Jesús Montero, have been in favor of adjusting the rise of the SMI to the economic situation and the evolution of employment, so as not to put economic recovery in jeopardy.

On his side, heThe unions value that Labor bets not to freeze the SMI. For the Secretary of Youth and New Realities of Work of CCOO, Carlos Gutiérrez, it must be taken into account that all the data will evolve favorably next year, and he adds that the minimum pensions will rise by 1.8% next year year and that the increase in average wages agreed in November was 1.89%. “From there the rise in the SMI should not drop next year,” he said this week.

On his side, the UGT Secretary for Trade Union Policy, Gonzalo Pino, stated that for his trade union organization “a breaking point” would be that the Government will propose an increase in the SMI of 0.9% such as pensions or the salary of civil servants. “We are considering an increase to 1,000 euros, which represents an increase of 5%. And we do it because we believe that this frequency of increase is easier if we are going to reach the goal of 60% of the average salary at the end of the legislature,” he said .

The UGT representative also pointed out that does not understand how the employer opposes the rise in the SMI, when it has agreed that at the end of this year the collective agreements are above 1,000 euros, or at least 1,000 euros.

“The employer’s association has only come to say what they always say: now we cannot, now is not the time or it is not possible,” said Pino, who asked the businessmen to “behave” in the negotiation and urged them to make a proposal for a raise and put the negatives aside, because “they have obtained a huge amount of money to save companies” during the pandemic.

On your side, the CCOO representative made it clear that it is “inalienable” that the SMI reaches 60% of the average Spanish salary throughout the legislature and pointed out that this is a good time to ratify the commitment and avoid “confusion”.