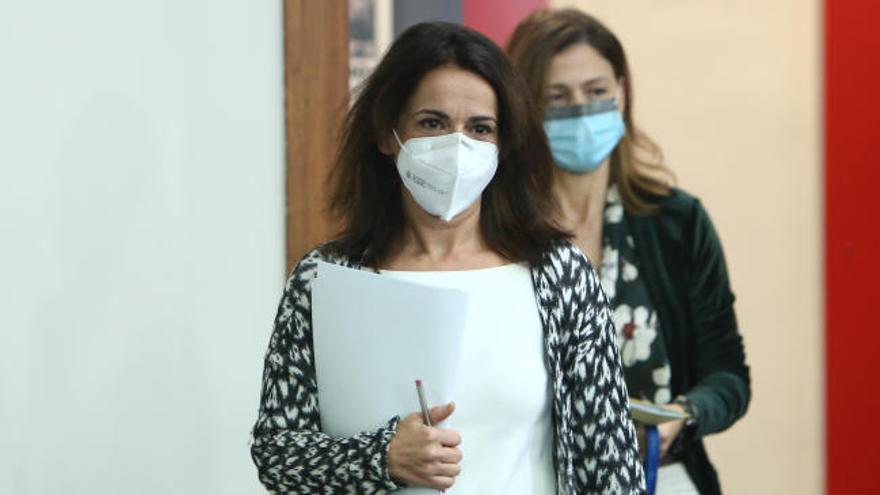 The director of the Spanish Medicines Agency (AEMPS), Maria Jesus Lamas, explained this Monday that the side effects associated with the administration of pfizer vaccine such as pain at the site of the puncture, muscle or head and fatigue are “very common” with vaccines.

“The most frequent reactions that have appeared are pain at the injection site, tiredness, headache, muscle aches or cramps, joint pains, fever in a much lower percentage or inflammation at the injection site. These reactions are very common in vaccines “, stressed in a joint press conference with the joint secretary of state, Silvia Calzón.

Meanwhile, other “rarer” that have occurred with a “much lower” frequency have been difficulties sleeping, nausea and, in four cases in which the causal relationship could not be established but “it must be borne in mind” , a mild facial paralysis.

“It is very important to remember that there will be a temporary relationship between many adverse effects and the administration of the vaccine, but they do not have to be related to each other,” added the head of the AEMPS.

It has done so after the European Medicines Agency (EMA), has given your endorsement of the Pfizer / BioNTech vaccine prior to the marketing authorization that the European Commission gave hours later.

A drug that has been shown to be 95% effective in protecting against covid, regardless of age and for mild and severe cases, although, on the latter, it has specified that more study time will be necessary.

Efficacy has been estimated at more than 36,000 volunteers over 16 years (including people over 75) who had no signs of previous infection; The study with more than 44,000 volunteers has shown a reduction in the number of symptomatic cases of coronavirus in people who received the vaccine.

A total of eight cases out of 18,198 developed symptoms compared to 162 cases out of 18,325 showing symptoms in the placebo group, leading to the claim that the vaccine has been shown to be 95% effective in the clinical trial.

Essay that has also shown around 95% effective in participants at high risk of developing severe symptoms, including those with asthma, chronic lung disease, diabetes, hypertension, or a body mass index of 30 kg / m2; this efficacy index has also been maintained between ethnicities and sexes.

“What we have left to know is how long the immunity will last, as well as to what extent it protects against severe disease. We will see that as the studies continue, which in phase three last up to three years. There is not enough data to say that there is no risk for pregnant women, “he noted.

After the green light of the European Commission to the commercialization of the drug, it will begin its distribution in the member countries of the EU, which they will receive the first doses on Saturday.

Spain still does not know which ones will arrive, nor does it know how many will correspond to each community: “In these hours the exact delivery of the number of doses is being finalized. In a few hours we will have more specificity,” Calzón replied.

It is also the communities that have organized the process, which in this first stage it will not require an appointment since the first to be immunized will be inmates in residences for the elderly and large dependents, their workers and first-line health personnel.

With which, it is the health services themselves that organize these first cases.

Regarding the people who refuse to be vaccinated and who will be included in the vaccination registry, the number two of Health has answered that “it may be of interest to help us analyze what are the reasons why it is rejected and insist on information campaigns and outreach to stress the importance of vaccines. ”

Because, he concluded, “it is important to remember two aspects: one, none of us are immune “and” two, the concept of vaccination is a gesture of solidarity “. “We must stop the transmission,” he has settled.

The new variant does not imply less efficacy of the vaccine

The appearance of new variants of the SARS-Cov-2 virus, as detected in the United Kingdom, does not “necessarily” imply a “loss of the effectiveness of the vaccine”, according to María Jesús Lamas has assured.

The Ministry of Health has shown its expectation before the new strain that causes covid-19, VUI-202012/01, which due to its ease of spread has forced suspend flights with the UK With the exception of those of Spanish citizens and residents in Spain.

“We are especially expectant,” said Silvia Calzón, who has appeared with Lamas to assess the epidemiological evolution and the approval by the European Medicines Agency (EMA, for its acronym in English) of the Pfizer vaccine.

According to the director of the Spanish Medicines Agency, “Not necessarily the variations will imply loss of effectiveness of the vaccine”.

To Lamas it does not seem “probable” that the variants -normal, so “this is not going to be the last” – affect the efficacy, since none have had “significant changes in the structure of the protein S”.

Vaccines against the coronavirus pandemic are designed to provoke that protein, S, and “teach it to the body and the body reacts by making antibodies to it,” he detailed.

In fact, even “pleasant surprises” may occur and that vaccines generate more immunity with some mutations than with the Wuhan sequence.

To know what the effect of the vaccine is on the new strain detected in the United Kingdom, it will take a few “days” or “weeks”, but in any case its appearance does not require repeating clinical trials, but rather to carry out laboratory studies with sera that they contain neutralizing antibodies.

In any case, the new variant requires intensifying surveillance, including the sequencing of the virus genome, “genotyping”, as recognized by the Secretary of State for Health.

The Center for Coordination of Emergencies and Health Alerts will monitor the evolution of the new strain, taking into account both the vaccines and the diagnostic strategy, which in principle “should not be greatly affected, since the antigen tests are based on a protein that is not affected by the mutation.

The Secretary of State has explained that the suspension of flights has been decreed after the recommendation to avoid all strictly necessary trips and has underlined the importance of the PCRs at origin that are requested from travelers from the United Kingdom.

In addition, he has indicated that there are controls at the airport to perform diagnostic tests against possible “red codes”, travelers with symptoms, or for those who do not provide a PCR test of origin.

The new variant of the virus has caused international concern and the suspension of air connections with the United Kingdom by several European countries that have joined, with exceptions, Spain and Portugal.