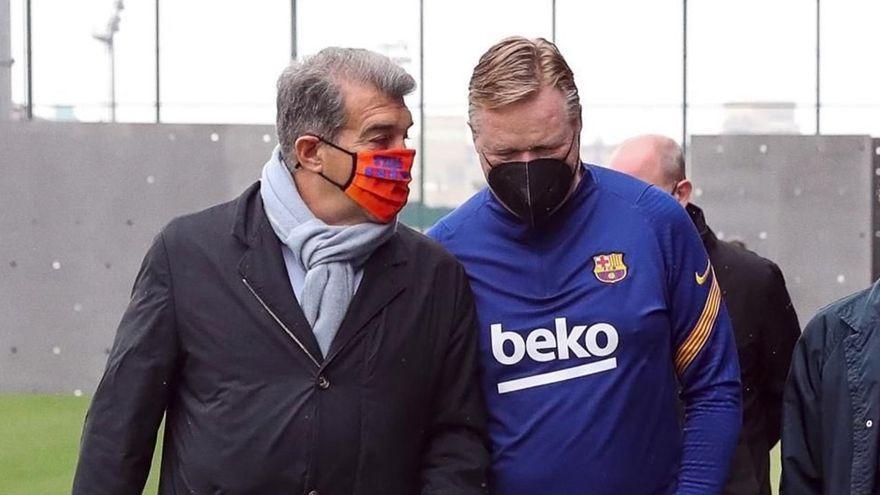 Ronald Koeman he is not in danger, as he has advanced Joan Laporta, the president of Barcelona, ​​hours before the decisive duel with Atlético de Madrid at the Metropolitano. The manager has radically changed his position just at the moment when the coach was weakest after the 3-0 conceded against Benfica on the second day of the Champions League. There has been an unexpected script twist on the future of the coach, after he was already seen out of his position.

“Koeman will continue to be Barça’s coach, whatever happens in the game, regardless of the result. Of course it won’t be his last game,” Laporta proclaimed, recalling that the coach “showed his courage” by assuming the team’s leadership in a very troubled moment.

In addition, the president has insisted that Koeman “is a reference of the barcelonismo, is a culé and it is necessary to give him a margin of confidence”. Laporta said it before entering the traditional meal, prior to each meeting, in this case with the leaders of Atlético de Madrid.

No room for maneuver

Laporta made this Saturday the speech I expected Koeman for weeks and months. The realistic speech that the coach has proclaimed since the start of the season. The president modifies everything he had designed in recent weeks, noting, in addition, that he had little room for maneuver in the election of Koeman’s successor, whose contract expires on June 30, 2022.

“He deserves that margin of confidence and we have thought so”, argued the president of Barcelona, ​​indicating that he has seen the coach convinced that he will be able to turn the situation around “when he recovers the injured, we will be able to compete better by reencountering the good game and victories. ”

“We understand that he deserves a margin of confidence,” Laporta reiterated, thus announcing the continuity after the club managed a wide list of candidates (Pirlo, Xavi, Robert Martínez and Marcelo Gallardo, among others) to succeed him. “After talking to him, I see that he trusts this team,” said the president. “Believe in the team.”

Loud and clear. @JoanLaportaFCB live from the concentration hotel of the @FCBarcelona_es:
“@RonaldKoeman He will continue to be Barça coach. Deserves a margin of confidence “# LaCasaDelFútbol pic.twitter.com/2FB3OfZcup

The duel with Atlético will not determine, therefore, the future of Koeman. “After talking to him I see that he trusts this team, especially from the moment the injured begin to recover, from then on we will have more margin,” added the culé leader, explaining that the coach “has a contract in force and we hope that we will meet again with the victories and the good game “.

Talk in the sports city

The president has revealed that he has had a conversation with the coach in the last hours where he has appreciated that he feels energetic to revive the sports project. “We have talked about a cold relationship, it is not true. It is a good and sincere relationship,” said Laporta, who maintained that dialogue with Koeman in the sports city of Sant Joan Despí before flying to Madrid where Barça faces this night at Atlético.

On Friday, just before the Dutchman’s press conference, the president was in the sports city of Sant Joan Despí. But it was his own Koeman who revealed the existence of that visit from Laporta. “Yes, he has been here, but I have not seen him because he was preparing the game,” the Dutchman limited himself to answering, refusing even on a couple of occasions to answer about his relationship with the president.

Also Read  Say goodbye: the battle to protect the waves of Australia | Surf

Hours later, and in an absolutely unexpected way, the landscape has changed almost radically with this public appearance by Laporta confirming the coach, without thinking about what might happen in the clash against Atlético. On the contrary. Disconnect the outcome of tonight’s meeting with the future of the coach.

“He is a good person and I think he thinks the same of me and we are all trying to make this turn for the better,” said the president, recalling that “Koeman loves Barça and decided to come at a time of maximum institutional difficulty and sports, I really appreciate that Barça assumed in a difficult moment “.

Laporta has recognized that “we have all had moments of discouragement” in clear reference to Koeman’s words this Friday in which it sounded practically like farewell. “These are difficult moments because it did not just turn out as we expected. Now we are recovering the injured and we are encouraged that we are going to reverse this situation,” he added.

“The differential point for Koeman to continue? He did not have to convince me. After thinking for a while and seeing how everything is going, with the concern that we had everything. I see clearly that he trusts the team,” said the president of the Barça. “It is true and the fans will understand that we have had injuries to important players, so we have had a less competitive team, so it was more difficult to score goals. I ask the fans to give the margin of confidence they deserve and why he has all the confidence in the team. ”