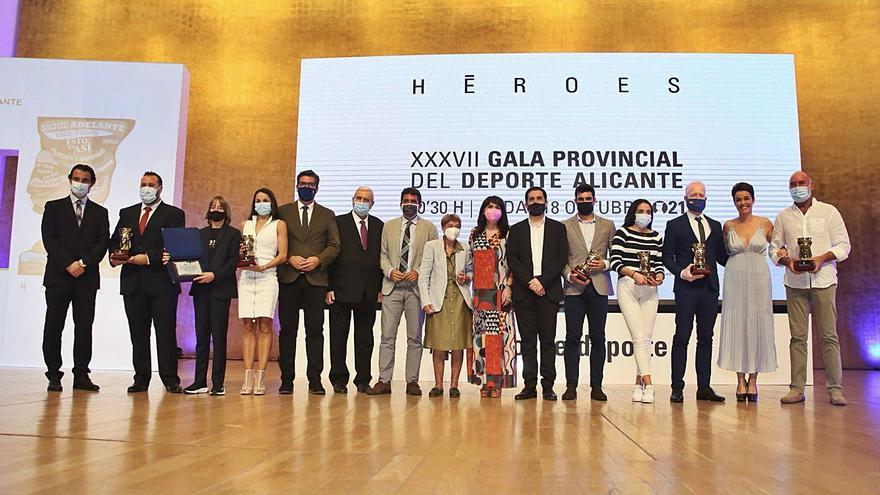 The handball player from Santa Pola Lara González and the athlete from Onil Jorge Ureña were awarded last night as the best athletes in the province of 2019, at the XXXVII Provincial Sports Gala, organized by the Alicante Provincial Council, in collaboration with the Association of the Sports Press of Alicante.

Lara González, who currently plays in Paris 92 in France, was in 2019 world runner-up in Japan with the Spanish team, in which she is a regular in recent years and with which she was in the past Olympic Games in Tokyo.

Jorge Ureña was proclaimed in 2019 European champion of indoor track in Heptalón. He is also a regular in major international athletics competitions in combined events and, like Lara, represented Spain at the Tokyo Games.

For his part, the Alicante athlete Iván José Cano, in the section of the Best Athlete with Functional Diversity; Eldense swimmer Alba Herrero, in the section for Best Promised Athlete; the Alicante Table Tennis Club UNASYR and the Torrevieja rhythmic gymnastics coach Jennifer Colino, were the rest of the galaradonados, in an act in which sporting achievements of the year 2019 were recognized, since in the past 2020 the Gala could not be held for the Covid-19 pandemic.

The young padel player from Mutxamel Izán Violero was the winner of the popular vote carried out through a web page, in which citizens have been able to choose their favorite candidates. Izán Violero will enjoy a weekend in a hotel in the province.

More than 600 people gathered at the Auditorium of the Alicante Provincial Council (ADDA) to attend this event with which the provincial body recognizes the commitment, work and effort of athletes, technicians and clubs in the province.

The well-known journalist and presenter of Spanish Radio Television (RTVE) Marta Solano was in charge of conducting an event in which a total of 36,400 euros in cash prizes were distributed and in which the value of sport was praised as a key element in the overcoming the Covid pandemic.

During the event, a special mention was also awarded to Antonia Serrano, a pioneer of women’s basketball in the province, who has dedicated a large part of her life to promoting and transmitting the values ​​of sport.

The president of the Alicante Provincial Council, Carlos Mazón, presided over the XXXVII Gala for the Delivery of the Provincial Sports Awards and recalled that “we are a land with an impressive list of renowned athletes, coaches and clubs, exemplary figures who have given us great triumphs , who have carried the name of the province around the world and who inspire us every day to give the best of ourselves. Of all of them, of all of you, we are deeply proud, “said Mazón.

The president of the provincial institution stressed that “in this difficult time, many of you have had to reinvent yourselves, using your ingenuity, to adapt to difficulties. Without a doubt, you have been the best demonstration of the enthusiasm and passion you feel for what you do. Thank you all, because you have taught us that there are no limits and that barriers, with sacrifice and perseverance, are overcome, “he said.

Also present at the awards ceremony were the deputy for Sports, Eduardo Dolón, the first vice president, Julia Parra, the spokesperson for the Socialist Group, Toni Francés, and other members of the Provincial Corporation, as well as national and regional deputies, mayors and councilors , who did not want to miss the provincial sports festival.