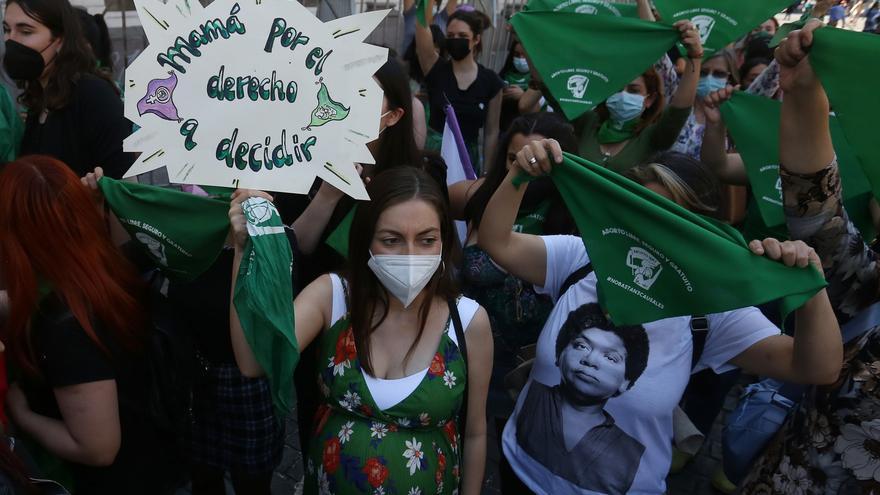 Latin America commemorated this Tuesday with several acts the Global Day of Action for a Legal and Safe Abortion in the middle of a long road with battles that take place in the judiciary, in government instances and also in the streets.

The legal abortion It is a historical vindication of feminist groups in the region, where only Argentina, Cuba, Uruguay, Guyana and four territorial entities in Mexico (Mexico City and the states of Oaxaca, Hidalgo and Veracruz) have decriminalized it. On the other hand, in Colombia, Chile, Brazil, Ecuador, Paraguay, Venezuela, the Dominican Republic, Guatemala, Bolivia and Peru, abortion is illegal except in three causes: rape, deformation of the fetus or risk in the life of the mother. In Haiti, Nicaragua, El Salvador and Honduras, the interruption of pregnancy is totally illegal, which carries prison sentences for the woman who undergoes the procedure and for the personnel who carry it out.

An unprecedented motion that decriminalizes abortion up to 14 weeks Gestation broke through this Tuesday in Chile, where the three aforementioned causes have been admitted since 2017, but she still has a very long and complicated stretch to go. With 75 votes in favor, 68 against and 2 abstentions, the Lower House ratified a reform to the Penal Code that seeks to free from sanctions women who carry out a voluntary interruption of pregnancy until the expected term is reached. However, this initiative, which the government of the conservative Sebastián Piñera opposes, still lacks a process of concretization of articles in the Legislature that, if passed, would make abortion not punishable, but would not guarantee it as a free and free right.

For a legal abortion throughout Mexico

Mexico City and the states of Oaxaca, Hidalgo and Veracruz are the only Mexican territories in which abortion is totally legal, but those women who demonstrated on the date advocate for better sanitary and legal conditions, not only in those four regions but throughout the country.

Feminist collectives mobilized through the center of Mexico City and, although they had planned to go to the capital’s Zócalo, a group deviated from the original route to make a stop at the Angel of Independence, where they painted and tried to tear down metal fences that protect the monument.

In an act that has been considered a victory for those who promote decriminalization, on September 7, the Supreme Court of Justice of the Nation (SCJN) declared unconstitutional unanimously the punishment for the interruption of pregnancy and invalidated article 196 of the Penal Code of Coahuila (north), which imposed from one to three years in prison “to the woman who voluntarily performs her abortion or to the person who causes her to have an abortion with The consent”.

During the march carried out on that date in San Salvador, the protesters spoke out in favor of the implantation of public policies on sexual and reproductive health and, in turn, they called on the Legislature with a proposal to reform the Penal Code to decriminalize abortion, at least on all three grounds internationally recognized. Article 133 of said code establishes that “whoever causes an abortion with the consent of the woman or the woman who causes her own abortion or consents to another person performing it, will be punished with two to eight years’ imprisonment.”

During the demonstration, tribute was paid to Beatriz, a deceased young woman who was denied an abortion by the Salvadoran Supreme Court and was hospitalized in San Salvador since April 2013 and gave birth to a girl through a caesarean section on June 3 of that same year. However, the baby died hours later when she was born without a brain, one of the reasons why she had asked to interrupt the pregnancy, in addition to her own illnesses.

Free and safe abortion in Bolivia

During a tour of the streets of Santa Cruz de la Sierra, the most populated in Bolivia, the protesters demanded that free and safe abortions be carried out or that at least the bodies involved respect the causes of interruption of pregnancy provided by law . The members of the Feminist Association September 28 asked that the “public servants” stop putting “obstacles” to carry out abortions when they are framed in those circumstances and that workers who refuse to carry out this procedure be punished. “We want the decriminalization of abortion, but we also want the norms to be complied with. We have a very serious problem of teenage pregnancies that end up in forced maternity hospitals,” the representative of said association, Carmen Sanabria, told EFE. The feminist leader affirmed that abortions that are carried out clandestinely constitute “the third cause of maternal mortality” in Bolivia.

In search of total decriminalization in Colombia

Judgment C-355 of 2006 of the Colombian Constitutional Court decriminalized abortion in the three known causes, but, according to the most recent report of the United Nations Population Fund published this Tuesday, the same instance is debating whether to declare unconstitutional Article 122 of the Penal Code that declares the voluntary interruption of pregnancy as a crime. The promoters of this change in Colombian legislation want abortion, more than a criminal case, to be seen as a public health problem. “Eliminate the crime from the Penal Code”, was the cry of the women today before the Palace of Justice of Bogotá, where the Court is located, and they continued singing “I am not a criminal, I am not a criminal, my just cause is Liberty”.

No to criminalization in Venezuela

Feminist organizations took advantage of the commemoration of the Global Day of Action for a Legal and Safe Abortion to ask the Legislative and Judicial powers of Venezuela to carry out changes that decriminalize the interruption of pregnancy. “The criminalization of abortion violates human rights of women, girls and adolescents to personal integrity, health, free development of the personality, the right not to be subjected to torture, cruel, inhuman or degrading treatment, to live a life free of violence “, said Laura Cano , organizer of the so-called Green Route.

Specifically, the protesters called for the elimination of articles 430 (attempted abortion), 431 (consensual abortion), 433 (aggravated abortion) and 434 (honor abortion) of the Penal Code and to participate in the drafting of legislation to guarantee abortion safe.