SAN JOSE, Calif. — Back when they were good, the Blackhawks used to mail it in, too, you know. There were games, weeks — months, it seemed, some seasons — when they barely seemed to care. They’d spend nearly all of February and March on cruise control. By the 2014-15 season, they were so battle-tested and so sure of themselves that piddling minutiae like playoff seeding meant little to them.

“When you’re in the playoffs, you have a job to do and you put everything else aside and you focus on that job,” Patrick Sharp once told me. “You’re not really caught up in how many games we’ve played or how tired we may be. But you feel it in training camp the next year. You feel it in those ‘big’ regular-season games in October, November, December, January that really aren’t that big. Yeah, the Blackhawks go into Washington to play the Capitals in January, that’s a ‘big game.’ But it’s really not a big game when you were just in the Stanley Cup Final a couple months ago. It was harder for guys to get up for the day-to-day grind of the regular season when we were going deep in the playoffs like that. Maybe that’s why you saw the slumps in February and March.

Also Read  Cushman & Wakefield plc (CWK): Is this the Most Sought-After Stock Today?

“I don’t think ‘cruise control’ is even the right way to put it. You still want to play, and you want to score, and you want to win, but it’s almost like, holy shit, we’re really doing this again? Here? Wednesday night in Carolina? And the other team is fired up, because the Blackhawks are in town. They’re playing their best and they want to beat you. It’s just tough to do it every night.”

These days, maybe Carolina feels that way when it comes to Chicago.

The current Blackhawks are in a different sort of mental grind. The kind that creeps up slowly but eventually gets a death grip around your head, your neck, your heart. The kind that breeds amid hopelessness and despair. The physical grind is the same for everybody. But powering through it gets tougher and tougher the less you have to play for. And really, what do the Blackhawks have to play for right now? Jobs? Pride? Yeah, sure, of course. But it’s the last week of the season. What’s done is done, opinions have hardened, futures likely determined behind closed doors high above the rink.

The Blackhawks have lost 12 of their last 14 games, dating back to shortly after general manager Kyle Davidson waved the white flag and traded Marc-André Fleury and Brandon Hagel. They have three games left.

You can see it on their faces after games. Just make it stop.

After a truly dreadful performance in Los Angeles, a 4-1 loss on Thursday night, interim head coach Derek King appealed to his players’ pride in San Jose.

“Play for pride and respect.” King said. “We talked about it today in the meetings. (We) should be a little embarrassed about what happened last game, only getting six chances. That’s not good. I don’t care how bad you are as a hockey team, you can get more than six chances in a game. They’ve got some pride on the line, they’ve got to earn that respect back. And this is a good time to redeem themselves.”

Five hours later, King was explaining away another 4-1 loss, this time to the similarly going-through-the-motions Sharks. The Blackhawks largely outplayed San Jose, but got sloppy a little too often, turned the puck over a little too often, played one-on-one hockey instead of sticking to their structure a little too often, and seemingly every mistake ended up in the back of their net — as is all too often the case. King insisted his team is not “checked out,” but acknowledged that “mentally, they’re fried.” 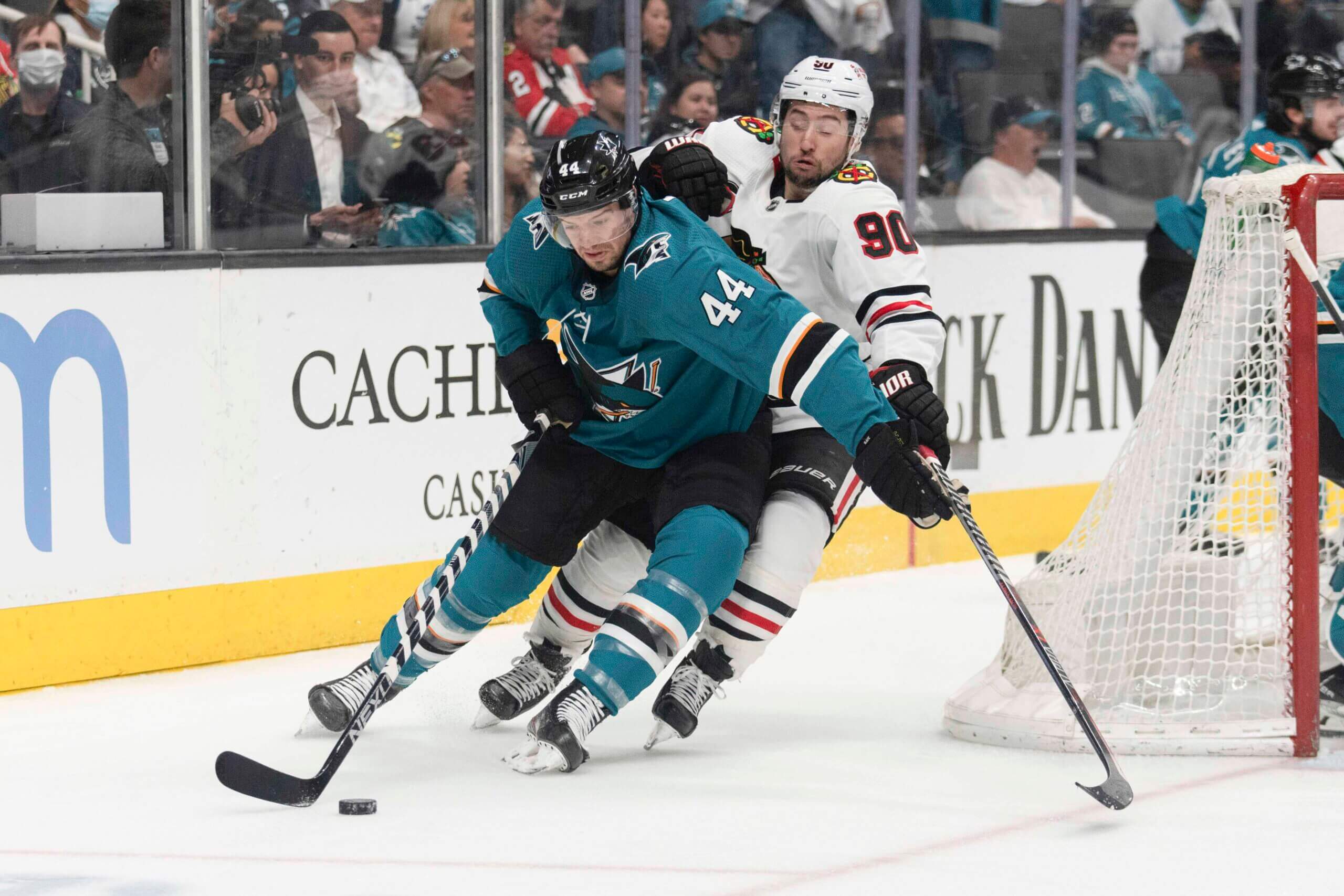 Tyler Johnson fights for control of the puck in a 4-1 loss to the Sharks on Saturday. (Stan Szeto / USA Today)

“We make the game way too difficult,” Tyler Johnson said.

“There’s really nothing to be happy about,” Seth Jones said.

Jones has missed the playoffs four other times in his NHL career, but this is the worst team he’s ever been on. And it takes its toll. Misery only mounts.

“Yeah, it doesn’t make the game fun,” he said. “I’ve been on both sides. I haven’t made the playoffs and I’ve made it a few times in my career. I don’t think I’ve been out this early, but the main thing is that we stick together in that locker room, (that) we don’t let any outside noise come in, and we continue to try to be better and work for each other.”

Perhaps that’s what’s most disillusioning for the Blackhawks. The Kings game was just a poor effort against a team desperate for points. The Sharks game wasn’t nearly as bad, against a team that’s not nearly as good, and it ended the same way, with the same score. Hey, if trying hard doesn’t change things, why bother? That’s the natural, human response to this kind of losing. That’s what the Blackhawks are fighting against, and will continue to fight against.

Losing might be good for the Blackhawks as an organization as they hope to hit the lottery jackpot either this year or next (it can’t be both, thanks to the trade that brought Jones to Chicago) to add some rocket fuel to the rebuild, but it’s soul-crushing for the players.

In 2018, when the Blackhawks were staring at their first missed playoffs since 2007, Patrick Kane started talking often about not letting a “losing culture” creep into the dressing room. After all, part of what set apart those great Chicago teams was their unflappable mindset, their defiant belief that no amount of adversity could ever stop them. Kane desperately didn’t want the Blackhawks — particularly the younger players who hadn’t experienced those deep playoff runs — to lose that. He fought it for years.

But that’s what the Blackhawks have now: a losing culture. Long faces after losses, empty platitudes about working a little harder, desperate reaches for moral victories. Assuming they don’t win the draft lottery this season and officially enter the Connor Bedard 2023 sweepstakes, it’ll only get worse from here. The organizational object will be to lose. Players don’t tank, but teams do. And players are smart enough to know when a front office doesn’t believe in them. When they’re being set up to fail. Davidson will be doing the right thing by the team, but it certainly won’t feel that way to the players.

Now, hey, to be fair, maybe it won’t be so bad. Just 16 months ago, the Blackhawks declared themselves in a full rebuild and put together a scrappy group of young players who spent much of the COVID-19-shortened 2021 season in playoff contention until they ran out of gas late. It was the most fun Blackhawks season in years. And yes, the Blackhawks have positives to cling to — Alex DeBrincat’s second 40-goal season, Kane’s third 90-point season, the return of a healthy Jonathan Toews, the promise of young players such as Lukas Reichel and Alex Vlasic.

But that’s grasping at straws, much like King and his players do in front of a microphone night after night, trying to put any positive spin they can on another dispiriting loss.

There are just three games left in this miserable campaign, one that started with so much hype and hope. The grind is almost over. And let’s face it, at this point, there’s no pride to salvage, no dignity to regain. A three-game win streak to close the season wouldn’t change anything, wouldn’t make everyone feel good going into a long summer of work and recharging. There’s literally nothing to play for, something that’s anathema to everything an athlete is taught from an early age.

“These are the grinds that it’s not easy to grind out,” King said before the Sharks game. “These are the ones that you’ve really got to dig deep to find a way to motivate yourself, or just figure a way to win that puck battle, shorten that shift, do all the little things right. And this is a challenge for us, these (last) four games.”

And perhaps the 82 that will follow. The motivation will have to come from within. Because as grueling, as grinding, as grating as this season has been? Next year holds little promise for better.

(Top photo of Sam Lafferty on the ice after a hit: Harry How / Getty Images)