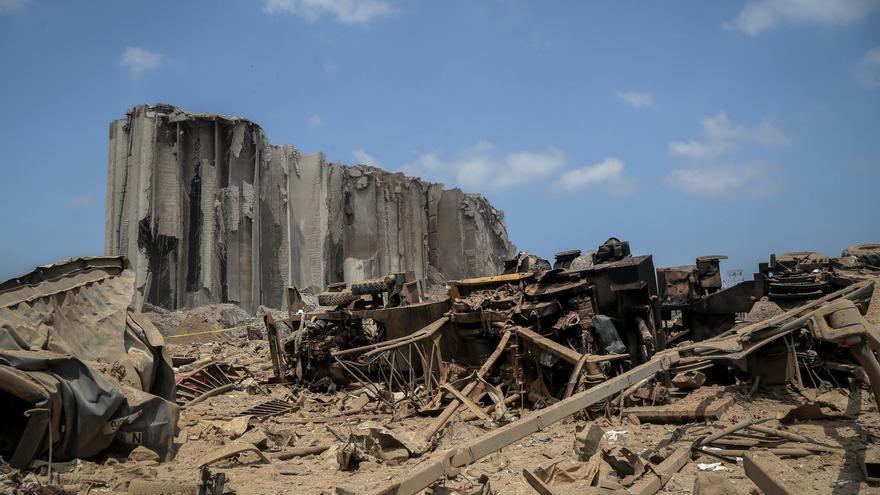 Lebanon commemorates this Wednesday the first anniversary of the explosions recorded on August 4, 2020 in the port of the capital, Beirut, that left more than 200 dead, without the investigations having clarified the causes for now or the perpetrators have been convicted, amid growing resentment from the victims’ families.

The explosions were caused by about 2,750 tons of ammonium nitrate stored in the port, the main entry point for goods and humanitarian aid, according to the first investigations, although the judge leading the investigation, Tarek Bitar, has not ruled out other options.

The explosions left more than 200 dead and around 6,500 injured, while they displaced some 300,000 people and caused enormous material damage in the city, whose port was destroyed, causing the transfer of import operations to that of Tripoli, much smaller and with less capacity.

The event caused a wave of protests Therefore, the population perceives as a reflection of mismanagement, corruption and interference by parties in State affairs, which led to the fall of the Executive of Hasán Diab, who remains in office due to political differences for the formation of the new government.

This situation, which led the Prime Minister in charge Saad Hariri to resign in July and the election of Nayib Mikati as the new prime minister designate, is a reflection of the blockage suffered by the investigations, marked by difficulties in summoning senior officials of the Lebanese political and security apparatus to testify.

Bitar, who took office after the resignation of his predecessor after he asked Diab and several former ministers to testify, has called for the appearance of these same people, although he faces obstacles in Parliament to the withdrawal of immunity, which It has caused a deep malaise among the families of the victims and those affected.

“The explosions in Beirut, one of the most powerful non-nuclear explosions in history, caused widespread devastation and caused immense suffering,” said the deputy director for the Middle East and North Africa of Amnesty International, Lynn Maalouf, who has criticized that the authorities have “flagrantly blocked” the work of the judicial apparatus.

Thus, he has emphasized that “The government has tragically failed to protect the lives of its people, just as it has long failed to protect their basic socio-economic rights,” in reference to an economic crisis considered by the World Bank as one of the most serious in the world since the middle of the 19th century.

“By blocking the judge’s attempts to subpoena politicians, the authorities have dealt a further blow to the people of Lebanon. Given the scale of the tragedy, it is surprising to see how far the authorities are willing to go to protect themselves from all scrutiny.” Maalouf lamented.

For its part, Human Rights Watch (HRW) has stressed that “the evidence overwhelmingly shows” that the explosion took place because of the “actions and omissions” of senior officials who “did not accurately communicate the dangers posed by the ammonium nitrate, storing it in unsafe conditions and not protecting the public. ”

“A year later, the scars of that devastating day are still visible in the city while the survivors and the families of the victims continue to await answers,” said HRW Deputy Director for the Middle East, Lama Fakih.

In this sense, Ibrahim Hoteit, representative of the victims, affirmed on Monday that they were giving a 30-hour ultimatum to the Government to withdraw the immunity of any person allegedly involved, after Hariri spoke in favor of this option, backed by the president. of Parliament, Nabih Berri.

“Where are we today, after a year of patience with the hope of achieving justice and the truth emerging?” Hoteit asked, who warned that the group’s position will cease to be “peaceful” if there are no changes, according to the German news agency DPA.

For her part, Najat Rochdi, United Nations humanitarian coordinator in Lebanon, stressed that the aftermath of the “devastating” explosions “still reverberate a year later.” “The country is struggling to find a path through which to emerge from the tragedy, which has affected all people,” he explained.

Thus, he recalled that the country was already facing a deep economic crisis and an increase in poverty before the event, deepened by the prolonged political crisis and the impact of the coronavirus pandemic, a situation that “worsens every day.”

Rochdi stressed that more than one million Lebanese – out of a population of almost eight million, including more than two million refugees – they need help meeting their basic needs, while 90 percent of the refugees live in extreme poverty, 55 percent more than a year earlier.

“Lebanon, which was not so long ago a country with a medium or high income, is facing probably the worst financial and economic crisis in its modern history, with more than half of the population living in poverty, “he stressed, before arguing that the delivery of humanitarian aid” is not the solution. ”

Rochdi has criticized the inability of politicians to form a new government, which has delayed the implementation of the reforms demanded by the international community to address the multiple crises and articulate economic aid from international organizations.

For this reason, it has underlined that it is “a critical moment” due to the “magnitude, depth and multidimensionality” of the crises, while adding that “the responsibility to avoid total collapse rests mainly in the hands of their leaders.”

The World Food Program (WFP) has said that it supports one in six people, more than at any time in its history, after the crisis has caused a Lebanese pound crash and commodity prices soaring, being out of the reach of many.

“The explosion in the port of Beirut is not just a memory of something that happened a year ago. It is a reality that still haunts the people of Lebanon in all aspects of their lives,” said the director of the organization in the country. Abdullah al-Uardat.

In this sense, the United Nations Children’s Fund (UNICEF) has highlighted that the Needs of affected families remain dire, while seven out of ten households needed basic assistance after the explosions.

“A year after those tragic events, children’s lives continue to be deeply affected. That is what the parents tell us, “said the representative of the agency in the country Yukie Mokuo, who added that” families have been struggling to recover from the effects of the explosions in the worst possible scenario: in the middle of a devastating economic crisis and a major pandemic. ”

UNICEF’s Regional Director for the Middle East and North Africa, Ted Chaiban, has called on political elites to “put aside your differences” to form a new government and has warned of the risk of the collapse of the water supply system in the country, which would add to the constant power cuts.

“If change, recovery and responsibility do not come already, they could never arrive and lead the country to the abyss and to a point of no return “, he explained, before pointing to a “triple crisis” economic, political and health that “threatens to leave almost every child in the country in a situation of vulnerability and need.”