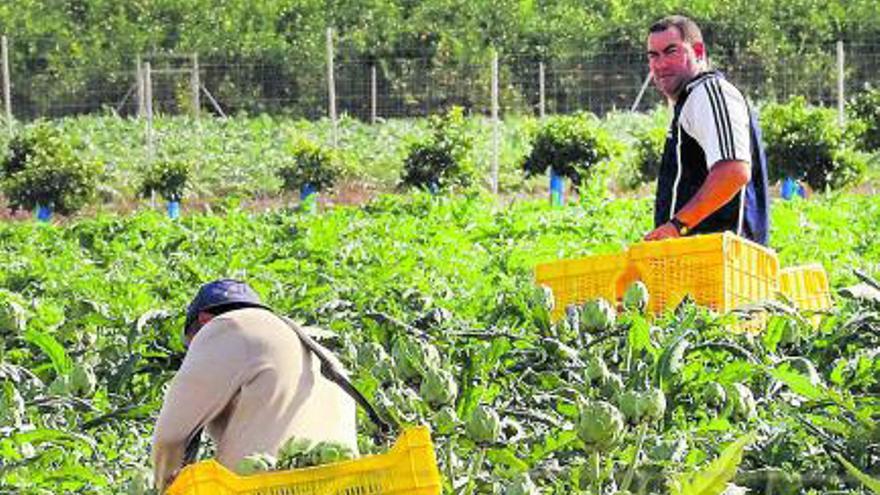 Third week of November, temperatures that have reached 28 degrees in the south of the province and winter crops that lose productivity due to lack of cold. The artichoke harvest campaign, one of the most profitable horticultural products of the season, has started with a decrease in the expected harvest volume in the main producing area, Vega Baja and Camp d’Elx. Heat and low rainfall are the main factors that are negatively influencing the tonnage produced, although prices are being quite acceptable and they reach up to 2.50 euros per kilo at origin. From now on, farmers have five months of artichoke harvesting ahead of them and the weather conditions and the availability of water resources will be the main determining factors. However, agricultural associations and trading companies agree that the planted area has decreased this year by around 15% and, therefore, production levels of previous years will not be reached. Of course, it is expected to exceed those of last year, which was one of the most fateful in remembrance of a DANA that destroyed more than 60% of the plants and destroyed important irrigation infrastructure.

PROXIMITY SALES. Family purchases make up for the drop in hospitality

The consequences of the torrential rains and floods registered in September 2019 continue to have repercussions a year later in the Alicante countryside. In fact, the loss of crops from last season, mainly due to the overflowing of the Segura River, is one of the main causes that explains why less artichoke has been planted this year. Diego Martínez, president of the Vega Baja Artichoke Association, explains that in 2020 there have not been enough cuttings to plant everything that farmers would have wanted. In this type of cultivation, when the harvest is finished, the producers extract small cuttings from the plant that are used the following year to generate new vegetables. “DANA took many hectares and those plants were lost,” says Martínez. Even so, the farmers used cuttings that were saved in the high areas and far from the river and also took advantage of those that survived in the Elche countryside. Also, as usual, they bought specimens from leading markets such as Navarre. With all this, 1,700 hectares of artichokes were planted last August, but once again inclement weather clouded the prospects. About 30% of the shoots ended up perishing due to high temperatures and humidity. Although it was intended to replace the damaged bushes, there were not enough plants and in some cases they chose to cover those holes with beans. “August was a very hot month and the plants dried up due to excessive heat. When it is watered, there have to be cool nights so that the fungi do not develop, but it was not like that and, as there were no cuttings, it was not possible to replant everything » says the secretary general of Asaja in the Vega Baja, José Vicente Andreu.

PROXIMITY SALES. Family purchases make up for the drop in hospitality | TONY SEVILLA

The second of the factors that would explain the reduction in hectares cultivated in this campaign is that there are producers who conserve the plants from one year to the next while waiting for the next vegetative cycle. It is a fact that it reduces production, but it also entails cost savings that can compensate in times of difficulties and allows to obtain certain profitability. However, this year it has not been possible to follow this practice because the floods suffocated the plants and multiplied the pests. “Part of the area that was destroyed by DANA has not been cultivated again and some have opted to plant shorter cycle crops, such as broccoli. The artichoke is a more expensive product and it deserves what it is worth, but you have to make a greater investment and there is also a lot of uncertainty about how the markets will evolve due to the coronavirus pandemic, so there are lands that have been left empty, “he underlines the president of the Asociación Alcachofa Vega Baja.

Despite the fact that the evolution of the crops is always marked by the fluctuations of the climate and the availability of water, the producers who have been able to continue with artichokes are confident that temperature drops will soon begin to register, something that has timidly occurred during the last days of this week. And not only because the cold doubles the production of the plants, but also because it encourages them to adopt the shape that consumers are looking for, at least in this area. «The quality of our artichokes is very good, but when it is cold and it rains they take that closed shape which is what people like», points out the regional secretary of the Union of Farmers and Cattlemen, Antonio Gutiérrez.

A good part of the artichoke harvest produced in the province is sold at auction in three alhóndigas in the Vega Baja that work for wholesale markets and also for local shops and catering businesses. The X-ray of the current situation indicates that sales directed to the hotel segment have decreased due to the fall in activity caused by restrictions on social mobility, the paralysis of tourism and the reduction of capacity and hours in bars and restaurants in the Valencian Community itself but also in the neighboring region of Murcia, which has kept the hotel business closed for weeks. With all this, the purchase of fruit and vegetable products is being absorbed almost entirely by family economies, so the stock of products such as artichokes, at the beginning of the season, is placed on the market without problem.

Luis Gómez, partner of the La Redonda de Los Huertos auction, located in Orihuela, points out that last week’s sale prices for artichokes have ranged between 1.20 euros and 2 euros. They are prices that he qualifies as high considering that when they reach the consumer they can reach three euros, but underlines that it is a situation that responds to supply and demand because at the moment there is not too much production to be in full startup of season. In this regard, it indicates that the majority of the product is being marketed in the domestic market. At this moment, practically all of the harvest is destined for fresh consumption, but when the tons harvested multiply in a few weeks, it will be the canning industry that will absorb 80% of the total sales. “As last year there was very little production and they hardly have stock in storage, we believe that industrialists will have to raise their purchase price a little to be able to work and there will be competition between them. The canneries rule a lot and influence the price that the artichoke reaches, ”Gómez says.

The agronomist Mari Carmen Hernández, who works for the Hortofrutícola 3 Puentes, based in Dolores, predicts that, if the weather is good and there are no unforeseen events, the production of the artichoke plants will multiply in the second period since in the first Due to the high temperatures, the expected profitability is not being achieved. In this auction, prices have reached up to 2.50 euros per kilo for the highest quality product, while the smaller ones have been sold for one euro. «I think the campaign is going to go well. Maybe not like the one two years ago, in which there were many kilos, but like the previous one, in which there was a little less product but better prices, ”predicts Hernández.

Despite the uncertainty generated by the covid pandemic and the difficulties of the last year by DANA, the Artichoke Vega Baja Association will again develop campaigns this year to encourage the consumption of this vegetable and “support the consumption of products among all from our garden, local products, until all this happens and the situation returns to normal. We must be positive despite the difficulties “, defends Diego Martínez.

Up to 2.50 euros. The sale price at origin shoots up at the start of the season

The sale price at origin, that is, what the farmer charges for the sale of the first artichokes of the season has reached costs of up to 2.50 euros per kilogram at auction in recent days. This is a high price that is not maintained during the rest of the year and is only reached at the start of the season when there is little stock on the market. It is expected that with the drop in temperatures in the coming months, production will multiply and, with it, the price will be adjusted according to supply and demand.

Proximity sales. Family purchases make up for the drop in hospitality

Restrictions on social mobility and limitations on capacity and hours of the hotel industry have led to a decline in sales of artichokes to the restaurant sector. However, and as has been happening with the rest of fruit and vegetable products, consumption among family economies has increased and at the moment a good part of the production of this vegetable is destined for local trade, which groups together supermarkets and food markets from the province and from other regions close to the Valencian Community.