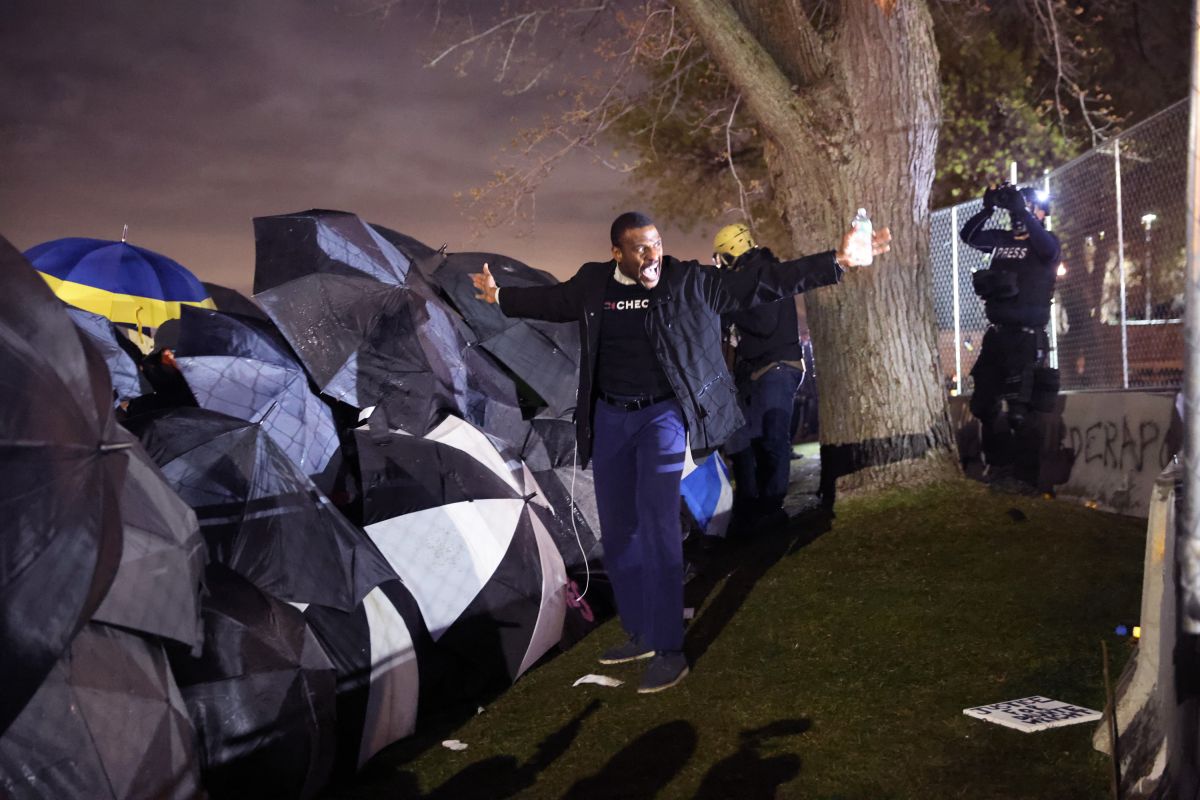 An activist calms protesters calling for justice for the murder of Daunte Wright outside the Brooklyn Center Police Department in Minnesota.

Kimberly Potter, the Brooklyn Center police officer in Minnesota accused of fatally shooting Daunte Wright last Sunday in the middle of a traffic control, wrote a letter of resignation to the position that consisted of two sentences.

Media such as CNN reported yesterday that in the letter the agent said that she loved every minute that she was a police officer and that she had served the community the best she could.

Potter, who is white and had been with the Brooklyn Center Police Department (a suburb of Minneapolis) for 26 years, resigned Tuesday when protests over the death of the 20-year-old African-American had been going on for three days.

Potter and the police department to which he belonged maintain that he mistook the taser pistol for the firearm.

Many do not believe this argument, including the Wright family and his attorney, Jeffrey Storms, who have argued that deploying each weapon requires a different procedure.

“Grabbing the weapon that you have probably deployed thousands, if not tens of thousands of times, is an intentional act. A firearm feels different than a Taser. It looks different from a Taser. It requires a different pressure to unfold. So we are going to investigate a lot all those intentional acts that led this officer to pull the trigger and kill this son, “Storms alleged to the chain.

Brooklyn Center Mayor Mike Elliot confirmed to the aforementioned media Tuesday that Potter had submitted his resignation letter, but clarified that no one asked him to resign.

“We did not ask him to resign. That was a decision she made, ”said the official.

“We are running our internal process to make sure we are accountable for the steps we need to take,” Elliot added.

The former agent continues to receive certain benefits despite the resignation, but exactly what is unclear.

Potter is being held at the Hennepin County Jail pending a first hearing at which a judge could release her on bail. Meanwhile, the police authorities keep watch on Potter’s house, surrounding it with a fence and concrete barriers against possible protests.

The involuntary manslaughter charge for which she was charged carries a maximum penalty of 10 years in jail in Minnesota. But since Potter has no criminal record, she could receive a lesser sentence if convicted.

The Brooklyn Center Police released the images from the agent’s body camera, in which a voice that would be Potter’s is heard repeating the word “taser” three times before pulling the trigger.

Next, the female voice exclaims, “Shit, I just shot him,” as the car driven by a fatally wounded Wright drives away before crashing.