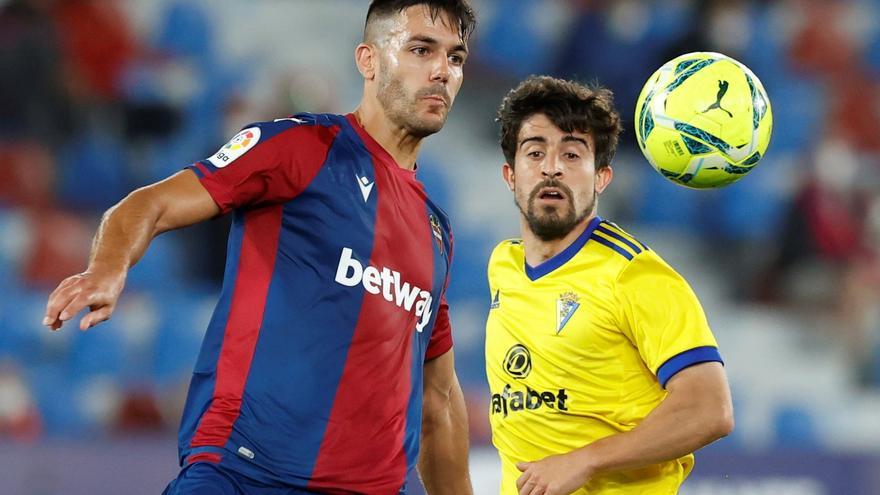 Levante Y Cádiz dismissed the League with tables that reflected what was seen on the pitch with more goals than clarity in front of goal in a clash in which Levante took the initiative a bit more and Cádiz knew how to hurt the counterattack.

After a few minutes of testing, a penetration of Toño almost up to the post led to the 1-0 scored with the knee by Roger and almost immediately Negredo, head first, established the equalizer. Both goals came in the first respective approaches to the goal of both teams.

Although Levante was more offensive than Cádiz, the match was not clearly in favor of the local team, who handled the ball well near David Gil’s area, but without generating danger, against an opponent who occasionally went against it, but it did not reach the goal of Cárdenas either.

A corner taken by Levante, which was somewhat more offensive, led to a large backlash resolved by Akapo from a large shot, which turned the scoreboard and put the Cadiz team ahead.

The local team controlled the ball in the final minutes of the first period, but Cádiz did not allow them to find gaps to level the game, although in the last minute of the first half a Bardhi’s cross shot found replica in David Gil, that avoided the tie with a good save.

The Levante came out intense after the break, although without resources to overcome the rear of Cádiz, although in a counterattack again David Gil was forced to disrupt an option of Paco López’s team, although in 58 a Bardhi-Roger-Melero combination, ended the tie by Melero himself, which at that time reflected the balance of the meeting.

After the draw, Levante looked more for victory than Cádiz, since they turned on the goal of Álvaro Cervera’s team without giving the rival the options that the visiting team had enjoyed in the first half.

The changes, with the entry of Morales and Cantero, gave way to a more incisive lift with ball handling, with speed in his actions against a Cádiz that was finding it difficult to get out of his zone and that gave the feeling of focusing his efforts on maintaining the level.

Except for one chance from Roger in the 90th minute, the match did not offer more goal options and was resolved with tables that conform to what was seen during the match.

Referee: Estrada Fernández (Catalan committee). sWithout reprimands in Levante, he showed the card for Cádiz to Negredo and Rubén Sobrino

Incidents: final match of the 2020-2021 League, played at the Ciutat de València before 5,000 spectators. A minute’s silence was observed for the Levantinists who died in recent months.