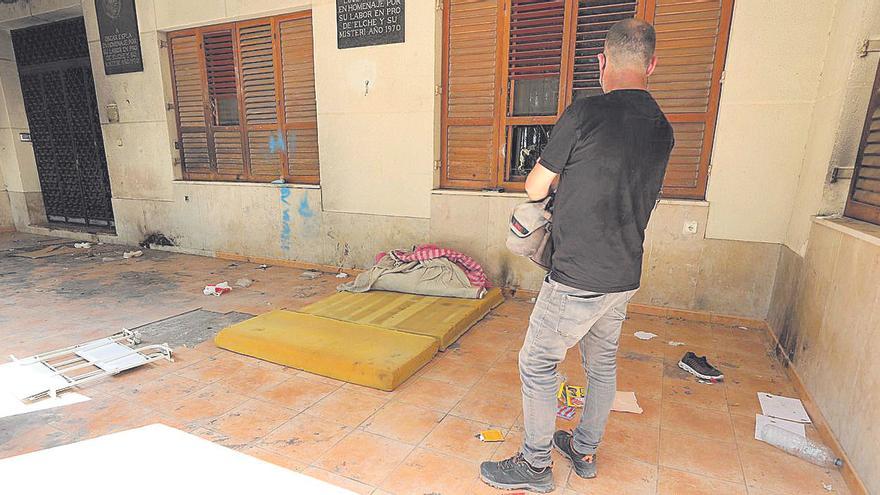 While the paperwork continues, the orchard languishes with weeds and garbage on every corner and has become a refuge for more than six homeless people who spend their nights away from the rest of the population.

The Ministry of Culture has not communicated to the Consistory in recent months that further modifications to the initial project, which dates from 2018, are necessary. The first estimate was for the first quarter of the year, but it is in view that it will take longer. Even so, from the Department of Urban Planning they trust that the tender will start in the coming weeks because they understand that there will not be any more modifications to the project since until now they have not raised more questions at the regional level, according to Arabid, mayor of the area.

The plans for this orchard are, in the first place, rehabilitate the historic building so that it becomes the headquarters of neighborhood associations. The second phase would be an adaptation of the environment because it is evident that it is totally degraded despite the fact that it is considered the third largest historical orchard in the city framed in the Palm Grove with about six hectares of extension.

However, piles of garbage can be observed in some points, areas of the orchard full of weeds and even piles of pruning debris of palm trees. To this if we add the amount of vandalism that the environment has suffered in recent years.

The situation has become chronic in the area to the point that in recent times this space has become a daily shelter for homeless people who spend the night and part the day in a space that has become unhealthy. There are shoes thrown in several places, mattresses on the floor and dirt, in addition to the remains of bonfires in the main entrance. There are also hidden spoons where some users cook the drug and during the day users can be seen hanging around with empty supermarket carts that they use to transport belongings.

The Consistory is aware of the problem and from the Department of Social Welfare they assure that they are taking measures to attend to these people because they cannot evict them from this public space.

According Mariano Valera, mayor of the area, at the municipal level they are communicated shower points, alternatives to spend the night in addition to informing them of the food collection points they have. They are also coordinating a plan to clean up the area. Valera points out that in the last coordination of homeless people, six people who are changing places were identified.

They review from this council that they are trying to coordinate a cleaning plan in the area to improve the appearance of the orchard. In the same way, they say that they are in coordination with the different entities of action in the street such as Conciénciate. This association of volunteers goes from Friday to Sunday to l’Hort del Gat to deliver food to the homeless.

Until 2012 this space housed the Phoenix Station As a research space for the palm tree and its creation in vitro, but from its scientific origin it has become an orchard with many negative charges.

Already the mayor, Carlos Gonzalez he reproached when this project was advanced in 2018 and before the visit of the Minister Marzà that the PP left him without activity in the Mercedes Alonso stage, and since then the degradation is one of his hallmarks. The local government of the time argued that with the crisis and the huge municipal debt there were other priorities.

An adaptation that does not conflict with the Palm Grove Law

The rehabilitation of l’Hort del Gat complies with the Palm Grove Law. This is what they say from the local executive because the Consell has so far given the green light to the project that it will finance almost entirely. The second phase of the recovery of the environment will go to clean up the garden and put an end to elements that today have no value, such as a huge swimming pool that for years has gone from transporting water to garbage. The idea for that point is to fill the pool to eliminate the fencing and to be able to give a social use to the space that remains.