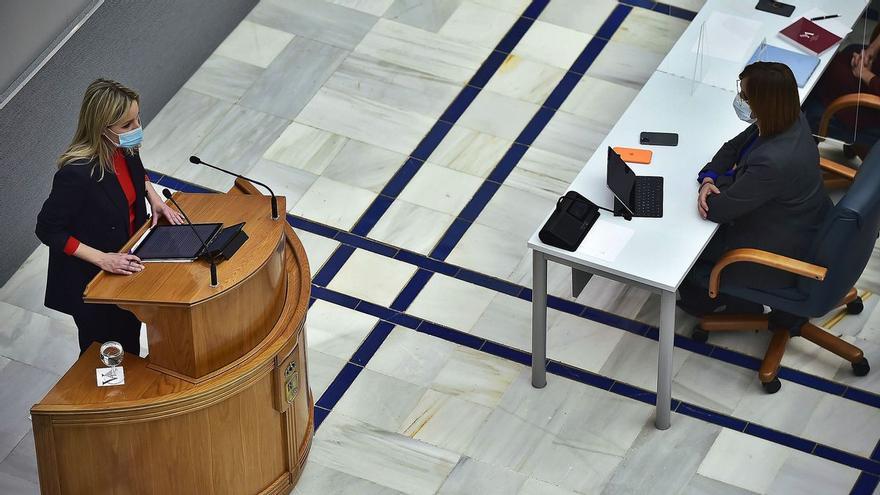 The announced ‘Government of dignity’ chaired by Ana Martínez Vidal (Cs) will not be born. This Thursday the Regional Assembly will vote on project of the oranges and the PSOE, but it will not succeed as it does not have the 23 necessary votes (absolute majority). Joining the three votes against the defectors Isabel Franco, Valle Miguélez and Francisco Álvarez is the possible abstention of the President of the Assembly, Alberto Castillo, and the three votes of the parliamentarians expelled from Vox, Juan José Liarte, Mabel Campuzano and Francisco Race.

The “free” deputies of Vox, as they like to call themselves, kept the meaning of their vote unknown throughout the plenary session yesterday. Even in the subsequent press conference they continued “negotiating with all political forces except those who say they have not negotiated with us,” the spokesman for the Parliamentary Group, Juan José Liarte, ironically affirmed. However, at 3:00 p.m., the former deputy of Vox announced at the gates of the Regional Assembly that both he and his two companions would vote no to the motion. According to him, they are very “excited” with the proposal of the general secretary of the Popular Party at the national level, Teodoro García Egea, to “begin the unification of the center-right in Murcia.” The promise of the popular to “guarantee the freedom of parents to choose the education of their children” has been decisive for Liarte’s decision to drop the motion of censure.

The negotiations of these deputies with the PP continued this Wednesday, so it is unknown if any of them will have a place in the regional government during the remaining two years of the legislature. “Our request has to do with programmatic aspects,” Liarte stressed.

Until then, the government program of Ana Martínez Vidal did not represent an impediment for the wayward people of Vox to continue negotiating, according to what he said.

Oblivious to the few possibilities she has, the candidate for president of the Government of the Region of Murcia in the motion of censure, Ana Martínez Vidal, rose to the rostrum and reminded the 45 deputies that they have “a historic opportunity” if they support her project and they remove the Popular Party from power after 26 years of government.

During his appearance, Martínez Vidal surprised by asking “forgiveness” from Murcia up to four times. In the first place, “sorry for the absurdity you have had to live in recent days”, “sorry because what could have been a simple change of leaders to keep the government project within a controlled stability, has ended up becoming a marketing of armchairs “,” sorry to all those people at risk who continue to wait with anguish and fear for their vaccines. How many have died because the corresponding vaccine was given by a Popular Party politician? ” And finally, he also apologized, on behalf of Ciudadanos, for having agreed with López Miras after the 2019 elections. “We think that by being part of that government we could do things differently; We could make them change We were wrong, “he explained. And he added that, although in Cs they could err, they have never been “accomplices of corruption.” “We were wrong, but we did not cover crimes,” he sentenced.

“What a signature is worth”

Transfuguism also occupied a good part of the speech of the orange candidate to preside over the Governing Council.

“Faced with this motion of censure, the Popular Party has reacted in the most corrupt way possible: they have bought the votes they needed to make the motion fail with public office and have included defectors in the Government,” explained Martínez Vidal. For her, “some have very lax morals or no morals at all.”

He recalled that this movement by López Miras violates the PP’s own statutes and the anti-transfuguism pact that they signed in November. “Although we have already seen what a signature is worth for some. We have here three clear examples, three people whose signature is worth nothing,” he said, looking at Isabel Franco, Valle Miguélez and Francisco Álvarez, all councilors in the new government. “Look at yourselves, you are not dissidents, you are not rebels and, much less, the saviors of a pact that no longer had a reason to exist. You are turncoats”, he snapped at them.

Martínez Vidal took advantage of his appearance to reiterate the reasons why this motion “is legitimate and fully justified”, since “the Popular Party has made corruption its form of survival.” First, he brought up the vaccine scandal. “They have allowed more than 600 people to be vaccinated, that we know of, in an absolutely irregular and unjustified manner,” he said. And they were ugly that they have not yet published the list with the high officials vaccinated (something he promised to do if the motion goes ahead).

He also devoted time to the convulsed relationship of his party with the PP in the Murcia City Council. “After asking Cs to investigate the awards made by hand by the previous PP team, the Popular Party has responded by accusing, denouncing and spying on the complainant. You will understand that trust has been broken,” he said.

After 26 years of popular governments, Martínez Vidal brought out that the Community has some of the worst socioeconomic records in this country. “The Region is at the bottom in salaries and pensions, we lead the dropout rate, the risk of social exclusion and the wage gap. We are in the tail in infrastructure, in regional financing, we have a public debt of more than 10,000 million euros, 20 times higher than 26 years ago, “he stated.

In this sense, Vidal considers that “when you’ve been in power for so long, you lose touch with reality and forget about people’s real problems, their needs and their desires. “To finish, he added that breaking with the PP has been a difficult decision to make:” Does anyone really believe that it is comfortable to present a motion against a government of which he has been a part? Does anyone think this is easy for me? It is not at all. But we are not here to do the easy thing, but the right thing to do. ”