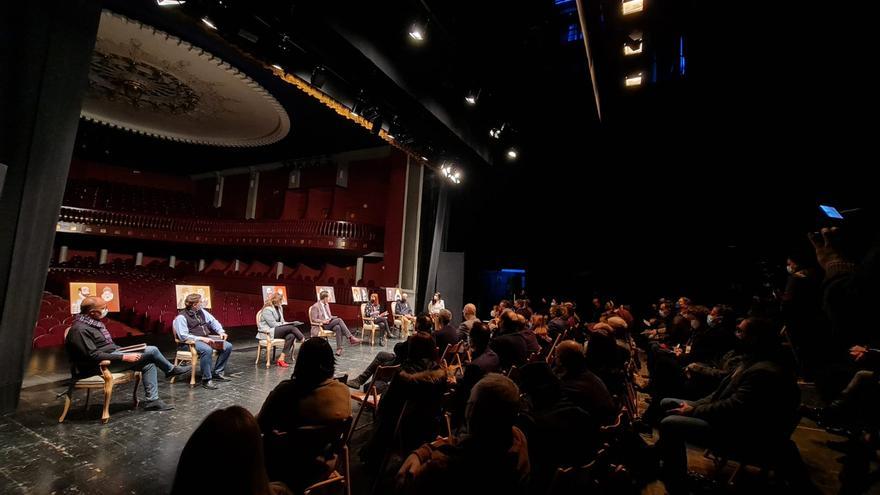 The Elda City Council has presented the book “Los Coloma de Elda. A relevant noble family of the Kingdom of Valencia”, a volume that is part of the events organized on the occasion of the declaration of 2022 as the Coloma Year. The event, held on the stage of the Castelar Theater, was presented by the journalist Lorena Pardo and had the participation of the mayor of Elda, Ruben Alfaro; the authors of the texts, Gabriel Segura Y Fernando Matallana; the illustrators of the book Lorena Guerrero Y Miguel Grace “Zetika“, in addition to Marina Toledo, coordinator of the book. Lorena Pardo recalled that “The Municipal Plenary of the City Council of Elda declared 2022 as the Coloma Year, coinciding with the V centenary of the birth of the 1st Count of Elda, Juan Coloma y Cardona, and the IV centenary of the publication of one of the most important works of military history of our country, ‘The wars of the Low States’ written by Carlos Coloma”. Within the framework of this event, the Eldense Council and the Paurides González Vidal Foundation have jointly programmed a series of literary, cultural, theatrical, musical, social, artistic and social activities to which other groups are joining to disseminate the family’s legacy Coloma.

Participants in the presentation of the Coloma de Elda book. INFORMATION

This book is the first work that will be part of the commemoration of the Coloma Year. It is a volume that highlights the lives of 12 protagonists of this family, 6 women and 6 men, who during the 15th, 16th and 17th centuries – in the midst of the Renaissance and Baroque – had Elda as the base, origin and destination of their lives. During the presentation, Miguel Gracia stated that “I stay with all the characters in this family, because I consider them my children. It has been a pleasure to immerse myself in the history of this family and to get to know them so that I can later transfer them as illustrations ”. Lorena Guerrero has assured that “Zetika has been in charge of drawing them and I was in charge of digitizing them and giving them color so that they all had a color range that looks like a family. Each one has its own personality, but everything has a common thread ”.

Gabriel Segura has stated that “The Colomas are little known in our city, but the truth is that their importance as a noble family goes beyond the Kingdom of Valencia. They had a leading role in the Hispanic Monarchy during all Austria, playing a very important role in the Wars of Flanders. It is essential that this family is known from school ”. The official chronicler of the city has highlighted that “Of the entire saga I am left with the founder, with Mosen Juan Coloma, who is the one who buys the Elda estate to escape his Judeo-converting past that is located in Borja.” Fernando Matallana has indicated that “They left a material work, which has been lost, but there is a documentary work that is in the archives and there are authors who have studied them and have bequeathed their studies to us. The Coloma heritage was one of the most important in the Kingdom of Valencia. Mosen Juan Coloma, despite his Jewish past, is the King’s secretary and accumulates an enormous patrimony. He was a banker who lent money to kings and without him the ennoblement of the family would not have been possible ”.

Rubén Alfaro has stated that “Juan Coloma is a very important character because at an urban level he played a very important role in the urban fabric of Elda, in addition to transforming the castle into a fortress. It is also about a Count who was related with people, something that was unusual. It is true that we do not have a legacy of buildings, but we can learn about the customs and historical events that took place “. Marina Toledo, for her part, has stated that “It has been an arduous task because the Coloma family is unknown to everyone and of course to me as well. We wanted the book to show the feeling that all the characters are part of a family and, in that sense, the choice of paper, design and also illustrations has been very careful ”.