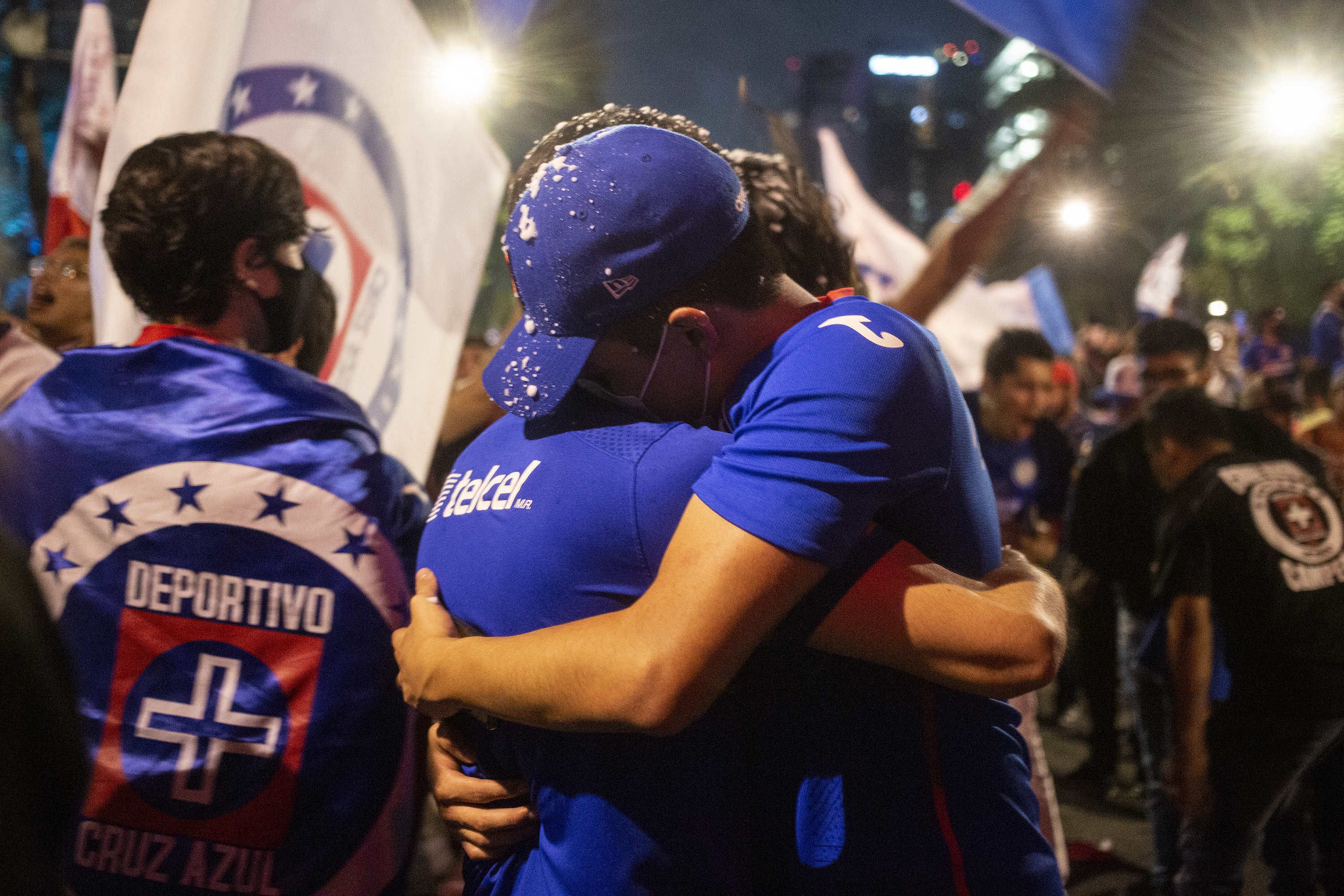 The Cruz Azul party took more than two decades to celebrate. Martín Hernández opens a can of beer on the Paseo de la Reforma avenue. On the median he placed several white shirts with the legend “Cruz Azul, champion.” The unlikely ability of the celestial group to lose finals led his family to almost bankruptcy. “Every time I had an end, we made shirts, but then I always lost. So we learned to no longer put a date on it and so we recycled it ”, he says. Hernandez, 30, had a hectic night. First he went to sell shirts and flags at the Azteca stadium. Twenty minutes before the game ended, he took his truck to go to the Angel of Independence. This time, despite their suspicion, the cement team was champion.

Cruz Azul conquered its ninth league by beating Santos Laguna in agony (2-1, aggregate score). The game was played with a 25% capacity due to the covid-19 pandemic. Just over 22,000 fans attended the emblematic Azteca stadium. Ticket sales were online and tickets flew in less than five minutes. Despite that, Sergio Sánchez, 25, took a truck from Michoacán to get to Mexico City to watch the game, despite everything, in a bar. “The prices were soaring. The resellers left us a ticket of 500 pesos (25 dollars) in 2,500 (125 dollars). I saw him with an acquaintance, but between the celebrations he already lost me. Let’s see if I can find a hotel or if I won’t wake up, ”he explains. Sánchez holds a rabbit dressed as Cruz Azul, the club’s mascot. The luck of the rabbit took more than 23 years to give them another League. “It is for my three-year-old son. I wanted to bring you a little souvenir. I had to come just for the money ”, explains the worker in an avocado field.

The best way to celebrate the cement team was to celebrate the Angel of Independence. Thousands of fans gathered there to shout that “Yes we could!” and “We have blue blood!” Paseo de la Reforma, one of the tourist spots in the Mexican capital, became the scene of what could well be a year-end macro-concert, before the pandemic. Groups of fans cheered their own without masks and celebrated the title with a healthy contradictory distance. Celebrating Cruz Azul’s ninth star made the celebration laden with alcohol, but not antibacterial gel.

“Look, go, nobody cares. House I’ll finish this and that’s it, ”says Martín Hernández, the champion’s T-shirt salesman. “It’s a joy to see these bastards win. I’m going to America. I’m happy for them because that’s how all the merchandise I have comes out. It will be a collection ”, he sums up before taking a sip of his drink.

Among the fans who preferred to get away from the crowd was Marco Briseño, 57. “I have been with him since the seventies. I liked the colors and I stayed. I have cried many times. Now what’s next? To follow the path of victory. There had to be a pandemic, they ran to Billy Álvarez [expresidente del equipo y de la cementera Cooperativa Cruz Azul durante 32 años y acusado de lavado de dinero]”, He opines.

“My mother taught me to be from Cruz Azul. We are faithful and the tiled cross. We started another era, enough of being runners-up. Goodbye to bullying and memes ”, launches Itzayana Hinojosa, 27 years old. This is the first time he has seen his own league champions. “We already buried the meaning of cross over”Says Mariana Tamer, 53 years old. “I am not scared to see so many people here celebrating, on the contrary, it is a good point to shake hands and see that we are united. They vaccinated me two days ago and it gives me more peace of mind, ”he adds.

Sofía Solís, 66, takes shelter under a Cruz Azul jacket that she complains about too loose. With a cloth mask, scream as loud as you can. “My father was from the State of Hidalgo [cuna del Cruz Azul] and the team instilled in us. In my maturity I have always seen them lose. And when Cruz Azul wins, I better turn off the TV. Today we come to celebrate. See how many years without a championship, young man. With so much alcohol it kills all the fans, “he says before turning to see one of the fireworks. A part of Mexico City did not sleep to celebrate the team that was finally able to exterminate their fears to be champion.

Subscribe here to newsletter of EL PAÍS México and receive all the informative keys of the present time of this country.