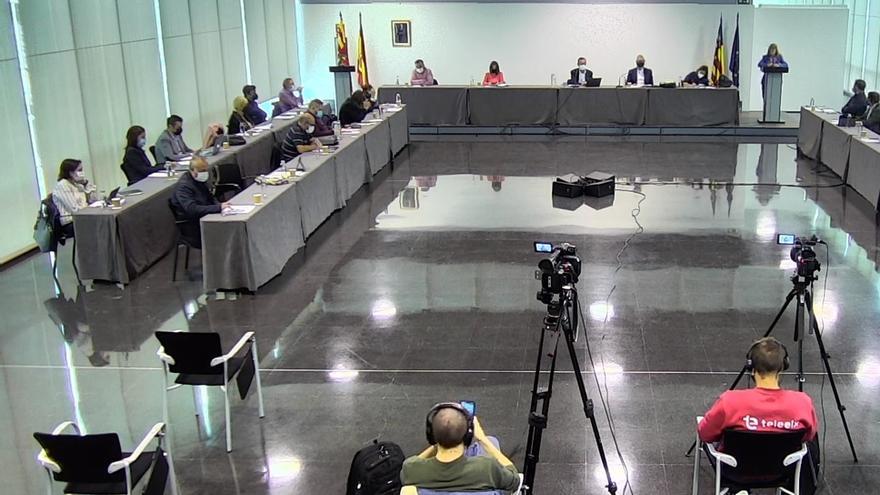 Why this plenary session? This is how the PP spokesman, Pablo Ruz, began his debate in today’s extraordinary session convened at the request of the popular group. The leader of the opposition has said that Elche is at the tail end of state investment, 8.5 euros per person from Elche. He has reproached the PSOE for not saying “enough is the ability of Pedro Sánchez to laugh at the people of Elche” and for that reason he has justified the need for this plenary session to demand that the Consell finance infrastructure for Elche stuck in the Ministry of Development, such as the South Round , the connection of the Business Park with the A-7 and the study to connect the airport with the train. The objective of the popular ones is that with the 300 million euros that the central government has given to the Consell to manage infrastructures for the Valencian Community, these historical needs of the municipality become a reality.

Ruz has proposed to demand from the Generalitat 19 million to finish the South Beltway, 1.2 million for the A-7 connection with the Torrellano industrial estate and 2.5 million for the study and start of the airport rail connection project. It is a “self-amendment” of the PP because initially it had proposed 10 million for the South Round, but it has recognized that this amount fell short after Compromís warned in an appearance last week.

Precisely, Compromís has presented a replacement amendment so that the General State Budgets are the ones that accept these investments and other claims, because they are the first competent and rule out that Elche renounces this right. What Esther Díez understands is that the Consell fund of 300 million can be allocated to the Alicante-Elche Mobility Plan because she considers that it is the central government that has to face the outstanding debts. Specifically, Compromís warns that 50 million euros are needed in investments for the airport’s rail connection, for the completion of the Ronda Sur, for the definitive return of the Lady and for the safeguarding of the Palm Grove. The amendment to dignify the commuter service of the Alicante-Murcia line also affects the municipality of Elche, other amendments for the repair of the coastline, regression of the Alicante coast and its use, in addition to the historical demand for the duplication of the Torrevieja variant on the Nacional 332.

“We continue to see how businessmen, politicians, unions and everyone. This plenary session is not going to be of any use,” warned the non-attached councilor, Eduardo García-Ontiveros, who lacks political weight in Madrid to demand fair investments for Elche. “And this has as a consequence the poor business relationship between the municipalities. We can never be an economic and business reference without first-rate communications,” he said.

“In the end it is not about political acronyms, but about 240,000 people from Elche who need infrastructures. Be responsible and demand from the Generalitat what corresponds to us,” said the spokesperson for Citizens, Eva Crisol, who has sided with the mayor not assigned, Eduardo García-Ontiveros, referring to his intervention.

“It is a valid attempt to claim Ximo Puig because Elche has miseries from the national budgets,” said the spokeswoman for Vox, Aurora Rodil, who has asked the mayor to “unite” everyone to achieve “from the infinite distance that I have with you ideologically “and” ask all together for these works for the economic growth that we long for and need.

“We suffer from the oldest commuter line in Spain”, complained the spokeswoman for Compromís, Esther Díez, who has reproached the completion of all the Madrid infrastructures in Madrid. “The Government takes us back to the same holder as always, the province at the tail of investments,” Díez has spoiled both his government partners, the PSOE, and the PP. “Whoever governs, this has always happened,” he said. “We cannot renounce the first exchange to make the claim that depends on the central government,” he reproached the plenary session.

For his part, Héctor Díez, PSOE spokesman, has started by reproaching the PP for its “permanent angry tone” and has thrown the PP’s management into the central government. “The difficult thing is that this government has been doing stuck projects and investments since 2015 by the Generalitat and the central government that are becoming a reality,” said the socialist. “The demands of this municipal government have allowed the opening of the Traffic Office, the AVE station, that the airport has first-rate access by the highway,” said Díez, who added that “after decades of attempts and tenacity of the mayor that once and for all the Arenales hotel is finished “. The PSOE spokesman has continued to address Pablo Ruz and has reminded him of some of the delays and stuck projects in the city during the government of Mariano Rajoy. “You remain in the disqualification and in placing labels to the PSOE we continue working”, has indicated, later to warn that 26 days ago the mayor spoke with the head of the Consell to request the investments for Elche. Even so, it has advanced that they would support the PP proposal, although “it arrives late and with bad manners.”

In the second round of speeches Pablo Ruz tried to add fuel to the fire to Compromís to whom he asked: What do you expect from Pedro Sánchez with Elche? and later it has stopped again in reproaches to what the PSOE in front of the central Government with the city.