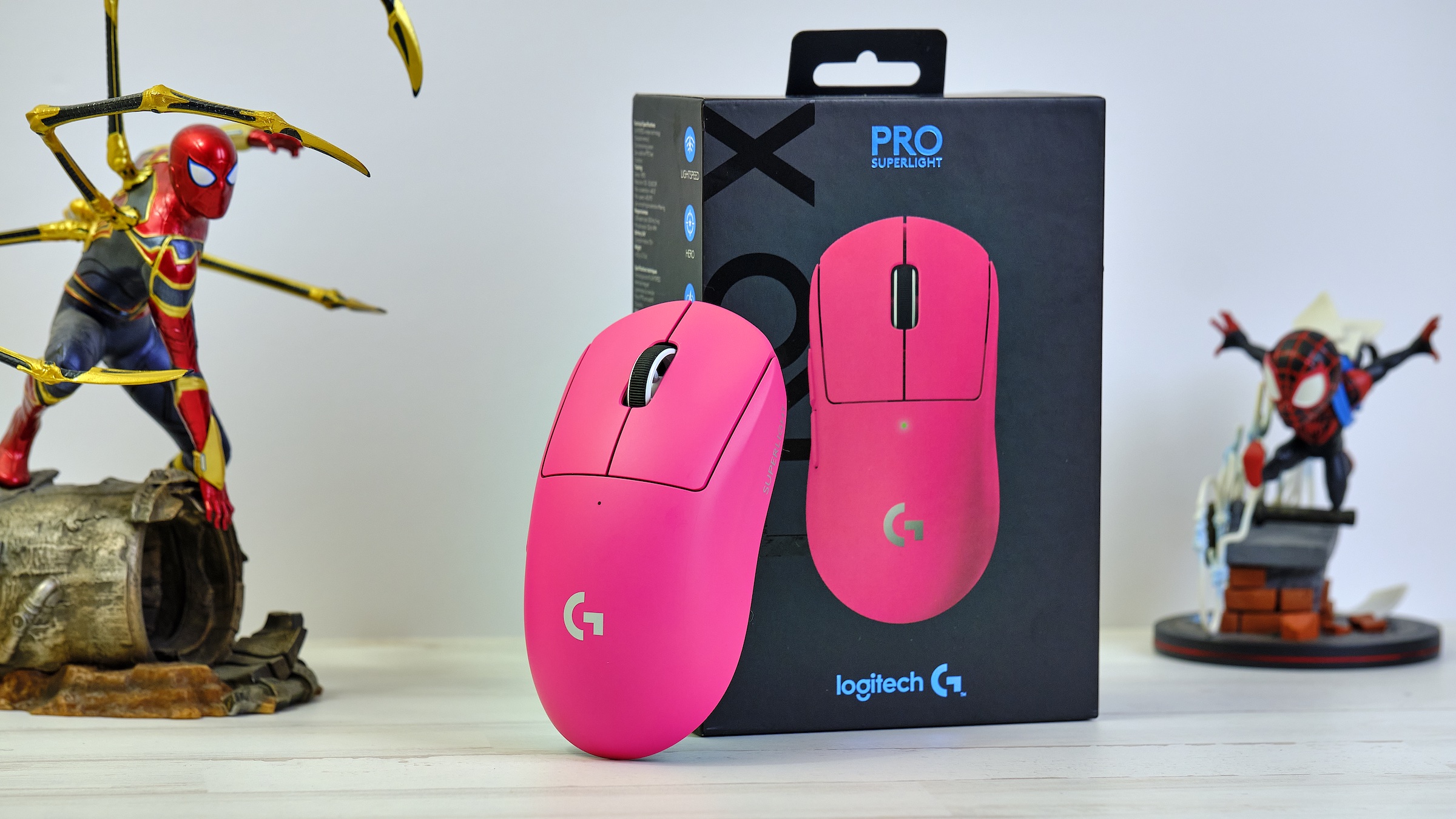 We have already told you about Logi devices for video games such as the G435 headphones, the G Pro X TKL keyboard and even the StreamCam that my buddy Rubén uses for the podcast every Monday.

Now a Logitech Pro X Superlight has fallen into my hands that we are going to analyze and that, as you can imagine, its main characteristic is described in the name.

It does not have the best touch, but the weight will conquer you

And it is that, if you see the mouse, you will think that it has nothing special. It comes in white, black and pink, which is the one we have, and I have to tell you that it doesn’t fit very well on my dark wood setup, but on a lighter table it looks great.

I have read some criticism of the white color because it yellows over timebut the truth is that I don’t think it’s a problem for the other two colors and what I can tell you is that in the weeks I’ve been with it, everything is perfect, like the first day.

But well, beyond the pink color, which definitely attracts attention, the truth is that we have a fairly simple mouse. The brand logo does not light up on this occasionwe have two buttons on the left side, the usual switches and the wheel.

Nothing more, becoming even minimalist, everything to lower the weight as much as possible to about 63 grams that, in the hand, feels great.

Obviously, this is the best feature of this mouse, since when you start to play or work with it, it feels like it floats on the surface because it weighs very, very little.

I am used to an MX Master 3 that weighs 145 grams and starting to work these days with the Speedlight has been a very, very good experience.

When playing, it also slides great on the mat and, for example, in titles like Overwatch it is a real delight because you don’t have to apply any force to the wrist and everything is very comfortable.

The surface on the base is made of a material that helps make the slide smooth and, on that same base, we have a power button and a magnetized hiding place for the 2.4 Ghz wireless receiver.

2.4 GHz USB with a robust connection and a microUSB on the front

And, precisely, the connection is something that I liked. In a professional arena, a wireless mouse, even with 2.4 GHz connections, might not be the best idea because the ‘pros’ are users who notice even the slightest change or latency.

Nevertheless, in the home field or even the enthusiast, a keyboard or mouse with this type of connection fits perfectly. I do not deny that Bluetooth peripherals have latency, something that is noticeable, especially in headphones, but with 2.4 GHz connections, things change.

I have been playing games of all kinds during these weeks and I have analyzed some gaming laptops connecting this mouse and I have not had any problem neither in demanding titles, such as Overwatch or Halo Infinite, nor in more single-player games such as Cyberpunk 2077 or Control.

The truth is that at all times the connection has been solidI have no complaints about latency and comfort has prevailed in my session.

On the front we have a microUSB, a classic in Logitech gaming peripherals, I don’t know why, that is included in the box and that has the, also typical, trident to anchor itself somewhat better to the device and that, with a jerk, it doesn’t let’s disconnect

You will be able to play with the cable, although this is something that makes the experience lose some grace, but the good thing is that if you only connect it to charge it, you will have to connect it a little.

The mouse has a very good power consumption and Logitech tells us about 70 hours of constant movement, but giving it a beating of use, in three weeks I have not had to charge it.

Built to play, but perfect for work

And, as I say, the gaming experience has been fantastic, but where this mouse has surprised me the most is when it comes to working. In fact, I think the quest for extreme lightness makes this mouse better for mobile work than gaming.

The first because I have traveled a couple of times with him and yes, my MX Anywhere is smaller and fits better in any backpack pocket, but with this Superlight I save a few grams of weight.

The second is because my daily job is typing, but many times when editing photos or “dressing” an article, what I use the most is the mouse. I like to move around my desk a bit long, since I have space, and both the sensitivity of the sensor and the click and weight, I love it in this task.

What I miss is a button to control the DPI both when playing and when working. And yes, you will be able to do it by software, but in the end I think it is much more comfortable to have a button dedicated to this task.

And if you’re wondering how about this model if you’re left-handed, the truth is that it’s fine because the design is symmetrical, but the side buttons are located so that you press them with the thumb of your right hand.

If you don’t use them much, it’s not a problem, but in the end they are very useful both for turning pages in Windows/MacOS and for programming quick actions in video games.

Of course, in both cases (game + work), I liked the wheel. It is cliqui and has a good touch and precision.

A mouse that stands out for its low weight

In the end, what we have in our hands is a mouse that, when you see it, does not seem to stand out, but when you have it in your hands you know how to appreciate it for its main virtue.

I think the plastics used are not the best, since it is not a plastic that feels too premium. It lacks, at least, a button to change the DPI and the only status indicator we have is an LED located in the central part.

However, the absence of better plastic or more elements is necessary to maintain a weight of only 63 grams.

The Logitech Pro X Superlight is a gaming mouse that lives up to its name by weighing only 63 grams. It dispenses with a lot of elements to be able to reach that mark and the truth is that it is very comfortable.

It is an extremely comfortable mouse for both work and play thanks to that feature and it is, indisputably, the main purchase argument.

To my knowledge, those 63 grams have only been surpassed by the new Razer mouse of only 58 grams, and something that it shares with the new Razer model is a price that, perhaps, seems high considering the rest of the characteristics. mouse.

It costs between 130 and 140 euros right now on Amazon and I’m already saying: it’s expensive, but if you want a super light mouse, this is it. Now, if this is not a quality that you look for and that you give vital importance to, I think there are more complete and better options at that price both inside and outside of Logitech.