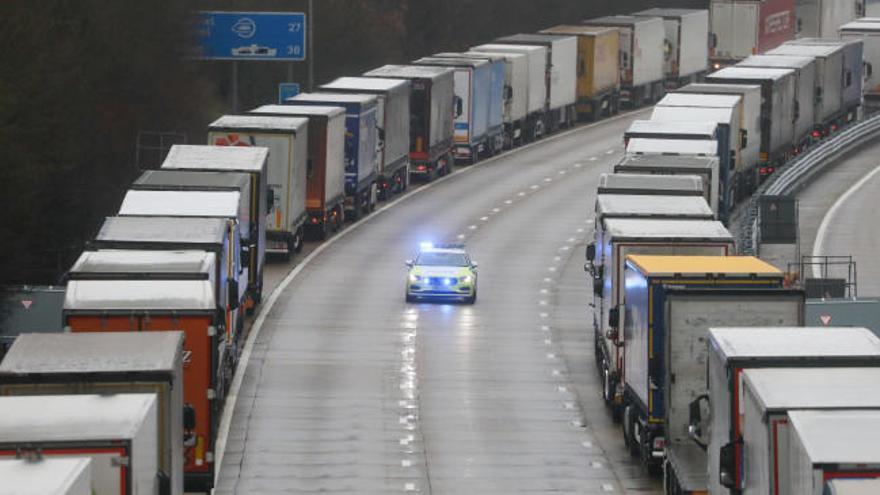 The sudden closure on Sunday of the French border to goods from the United Kingdom has caused a chaotic situation in the region near the English port of Dover, with an added danger of shortages in the middle of the Christmas season. The kilometer queues of trucks they linger on the roads and highways of the Kent region. Some sections of these roads have been turned into makeshift car parks.

“The closed French border” illuminated signs are posted on the highways, along with calls from the authorities not to travel to the area. France has hinted that the movement could be “reestablished in the next few hours.” The British Road Carriers Association (RHA) has called on the governments of Paris and London to agree on a solution. The Government insists that border problems will not affect the arrival of the covid vaccine.

10,000 trucks regularly pass through the port of Dover every day, but this Monday morning neither truck drivers nor passengers can cross the channel towards the mainland, after Paris decreed a closure in principle of 48 hours. AND although it is allowed to travel in the opposite directionMany hauliers do not want to risk entering the UK for fear of being trapped, as thousands of their colleagues are already, unable to go anywhere.

RHA Executive Director Richard Burnett has called on the British Government to provide truckers with water, food and sanitary facilities. The situation is similar in other points. The authorities of the International Port of Portsmouth, in the south of England, also advise passengers and carriers heading to France not to go to the port.

According to different sources, between 1,000 and 10,000 Spanish truckers are trapped. According to the Spanish Confederation of Freight Transport (CETM), they are between 7,000 and 10,000 while the National Federation of Transport Associations of Spain (Fenadismer) lowers the figure to just over 1,000. CETM sources have indicated that drivers who have been trapped have no place to park or eat. Fenadismer warns about the possibility that those who are in this situation may be forced to spend Christmas days there in precarious hygiene and food conditions.

The unexpected shutdown, due to the emergence of a particularly contagious strain of coronavirus, is a further blow to the transport industry after the gigantic traffic jams registered last week due to the uncertainty of Brexit and the approach of Christmas. Prime Minister Boris Johnson is to chair a meeting of the Cobra national emergency committee to discuss, according to Downing Street spokesmen, “the situation of international movements and in particular of the transport of goods leaving and arriving in the United Kingdom”.

The Scottish Government also participates in that meeting. There are millions of pounds at stake for fish from Scotland that cannot cross the border to the mainland. The Food and Drink Federation also warns of the fear of possible shortages of fresh products for Christmas. Sainsbury’s, the UK’s No. 2 supermarket chain, has warned that “if nothing changes, we will start to see shortages in the coming days of lettuce, other salads, cauliflower, broccoli and citrus.