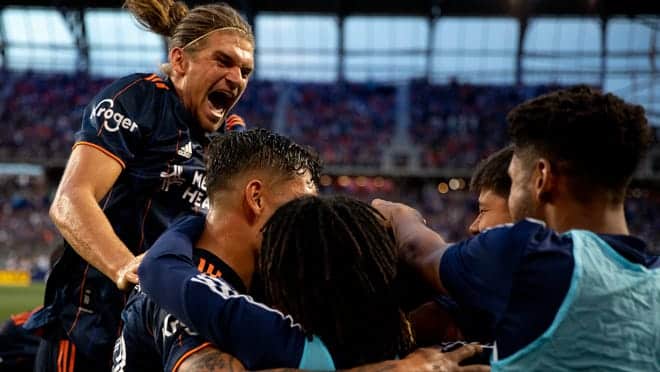 It was going to take something special to beat Orlando City SC goalkeeper Pedro Gallese, and Luciano Acosta obliged.

Gallese, the starter for Peru’s senior men’s national team, was dominating Friday’s match against FC Cincinnati at TQL Stadium and stymied the hosts until Acosta, a second half substitute, facilitated a breakthrough.

In the 64th minute, Acosta forced Gallese into a lunging save. But then Acosta gathered his rebound and fed the ball across the face of the goal mouth to Brenner Souza da Silva, whose simple tap-in was his first goal of 2022.

Brenner’s score was also the deciding tally in FC Cincinnati’s 1-0 victory against an Orlando side that entered the match in fourth place in Major League Soccer’s Eastern Conference.

The FC Cincinnati victory allowed the club to improve to 7-7-2 (23 points) and to move into fifth place in the east with a wide range of matches still to be played around the league this weekend.

After being unavailable for training during the June international break due to being placed in health and safety protocols, Acosta played only 13-plus minutes off the bench for FCC in Saturday’s 1-1 draw with Philadelphia Union.

By Friday, FC Cincinnati head coach Pat Noonan deemed Acosta fit to come on in the 55th minute, and that was plenty of time to affect change to a game that saw Gallese denying Cincinnati at every turn.

The Enquirer will update this report.

Welcome to Cincinnati.com’s live coverage of FC Cincinnati (6-7-2) versus Orlando City SC (7-5-4) at TQL Stadium (7:30 p.m.). Refresh this page throughout the match for live updates and analysis, and follow Enquirer reporters Pat Brennan (@PBrennanENQ) and Sara Tidwell (@saramtidwell) on Twitter for further updates.

• 64th minute – GOAL, FC Cincinnati (1-0): Brenner Souza da Silva finally opened his account on the 2022 season with a tap-in, but it was Luciano Acosta that did the hard work on the play. After the white-hot Pedro Gallese stopped Acosta’s initial shot, Acosta gathered his own rebound and fed the ball across an essentially open net. Then, Brenner needed only the simplest of tap-ins to put FCC in front.